Two's Complement is one of those tricky little things that you can easily mess up, but what if there was an easier way of doing it than the traditional methods?

Well indeed there is.

For this example, we're going try and calculate -64. This should be easy.

The first step is to figure out how many bits we are going to need. For this we will need 8 bits. As a result our first place holder will be 128.

But wait a moment, the next thing we do, and we do this before putting down the placeholders, is we want to calculate a negative for the first place holder.

So what do we do? Well here's my way of doing it, and I don't know of anyone else who does it this way but:

Now write that as the first place holder instead. We always have a 1 for a negative number (the sign bit) so put a 1 underneath it.

The next step is to keep adding until you get to 0.

Like I say, I don't know anyone else who uses this, though I do know of a technique similar to it. If you're teaching this to students or pupils, I don't recommend using this to teach, just to check that they got the correct answer.

Lately I have been working to improve the cable management in my room and it feels like it's always an on going task. Now I've finally got to the stage that it's no longer an issue after completing it by buying an IKEA SIGNUM cable manager: 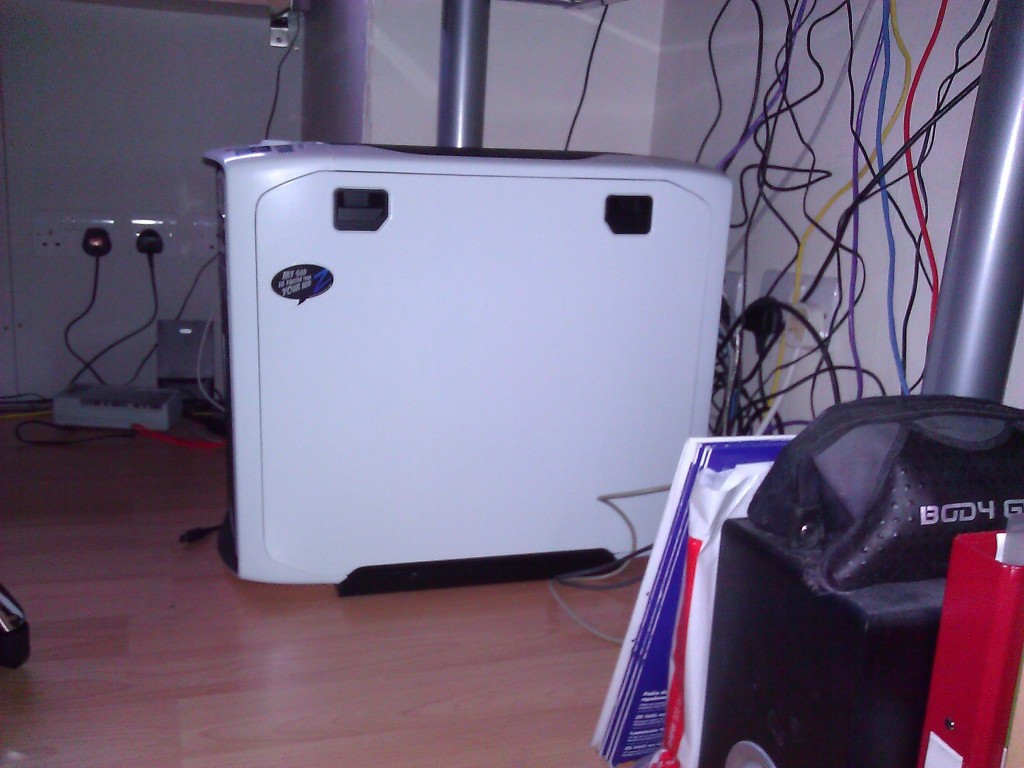 My cables in 2011, before my BlueLounge CableBox even 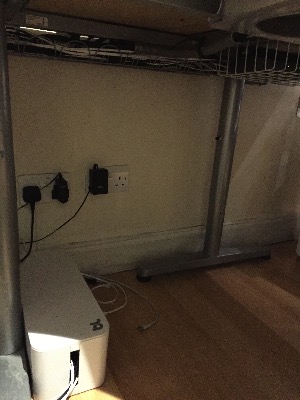 Around 30 cables run along here, yet they don't really affect my room at all. 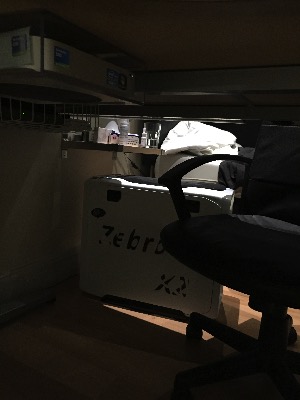 8 of the cables run right around the desk and have zero impact on the appearance thanks to cable trunking. 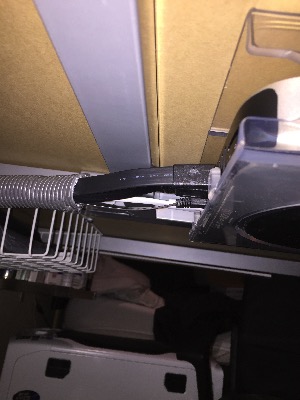 My Mac mini, which is mounted to the bottom of my desk, has five cables (currently) that run to it and are neatly hidden in Ikea cable trunking. 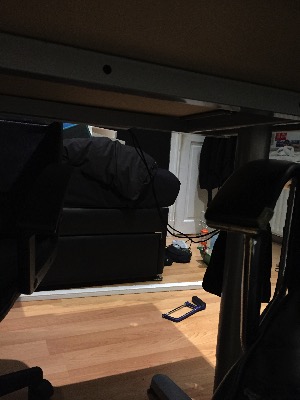 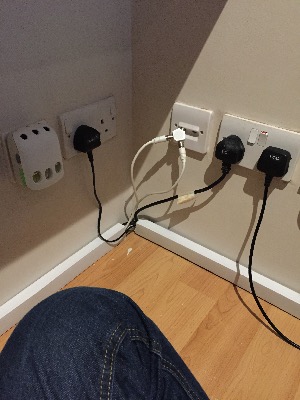 The cables that run around my bedroom are now trunked - reducing dust and making it more pleasant to the eye. I've left corners open so that they can reach the sockets 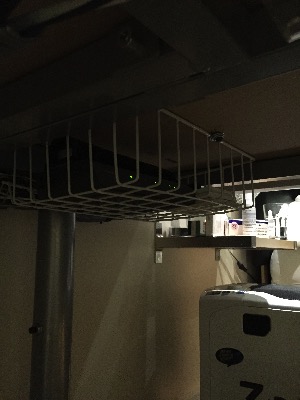 Finally, my personal switch in my room (which connects to our main network through an RJ-45 on the wall which has been there since 1999) is found in a basket under my desk.

Oh yea, and I achieved this with flat cables too, which are a fantastic way of routing cables around a desk like this.

I will likely do a tour of my bedroom soon, as this is long overdue.

I am always banging on about a better web, especially through the Twitter Hashtag #BetterWeb, but the technology behind the web is becoming better and better. Nowadays things like being able to access system information such as the battery life are becoming a real thing - meaning that the native app may soon disappear to the already multi-platform web.

If you do not already follow me on Twitter, please do so that you can get my latest ideas for improving the web.

I have noticed this time and time again, but for all you people who have never experienced the Mac experience, this is how your PC looks from a Mac's Finder:

This is how Macs see PCs

As much as one of my YouTube videos states that Windows 8 is in my opinion a recommendation, I will not be purchasing it. Sure DirectX 12 will not function on Windows 7 and that means I cannot take advantage of this great new API. Unfortunately, that is not enough to make me give up features that I use and need on a regular basis. 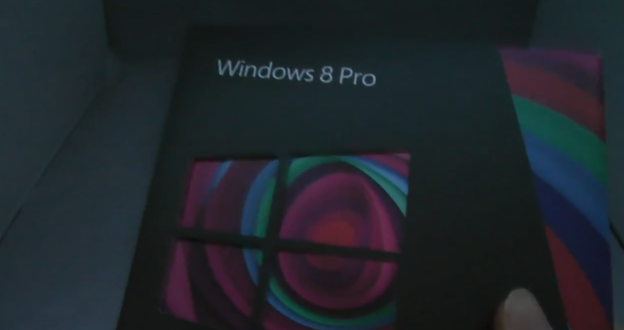 For a start, I do not think I could give up the Aero glass theme as I am and have always been a fan of the theme. I could live without it but I would rather not have to trade in something I love for something that I may prefer for features like DirectX 12. There's no real games for DX12 at present anyway.

I will not be upgrading my desktop, MacBook Pro or netbook to Windows 8. In fact, this business is pushes me to love Mac OS X more and more by the day.

Finally, I have heard that because of the fact that it is a new design of the Windows operating system, it is glitchy from the kernel upwards. I am not going too much into this but I have discovered that a lot of drivers that I used on 7 do not work with 8. Therefore, compatibility is something that I would lose with a lot of hardware. I just could not use 8 without full compatibility.

Since I now own Stardock WindowBlinds 8 for Windows 8 after the recent release, I have since transferred over to Windows 8 and I am loving it. I have the Start8 from Stardock to bring back the Start button and I have a Dell S2340T touchscreen display.

Also, my Gigabyte board has since had drivers released for Windows 8, meaning I can use it together with Windows 8.

Posted by jamiebalfour04 in Tech talk
windows
8
upgrade
should
i
not
update
What has happened to FireWire?
29Sep2013

Firewire has suddenly become an obsolete connector in many areas of computing. When I build my previous computer in 2011(named the Zebra) it had a Firewire header and Firewire on the back (actually 2) and now when I'm building my new computer (due to a fault with the board) I've come across a huge problem when looking for boards that feature this connection.

It's becoming increasingly difficult to find the IEEE1394 standard anywhere now. Macs are starting to phase out a connector which they backed so hard and definitively for years until Thunderbolt came out. But Firewire still offers an excellent, CPU-free connector which is great for people who cannot afford a new hard drive with Thunderbolt (I wouldn't recommend USB because of it's topology and lack of daisy chaining).

To put Firewire into a PC is also getting more difficult as PCI is getting more and more obsolete by the day. Most Haswell boards do not feature PCI but feature PCIe x1 instead. Firewire cards in the form of x1 tend not to be hard to find, especially with an internal header.

I guess I better learn to embrace the future better...

Also, someone who agrees with my statement:

Nokia's new advert suggests that "every day, more photos are taken on the iPhone, than any other phone". Nokia's Lumia camera may be better, but does that mean more people will change to Nokia's phones? Well, clearly not as Windows Phone only has around 2-3% of the market share. I'm not criticizing Windows Phones themselves, but the operating system they run on.

For now, my point is that if Microsoft doesn't do something with Windows Phone 8 and indeed Windows 8, then they will see the market slip out of their hands to both Google and Apple as BlackBerry did.

I'd like to mention my new software which is under development:

Hyper WEB (Hyper Wonderword-Extends-BlackRabbit) is a web editor. It is based on the same distinct feature set of the BlackRabbit Editor in that it uses a function machine editor where inputs are given and the editor produces the output based on those inputs. The editor uses the Internet Explorer's Trident engine with full support for Internet Explorer 10. Future plans are to bring WebKit to it. Pictures will be posted soon as progress begins to show. Currently the browser engine provided is based on Cobweb version 2.0, and it features the same page blocking technologies integrated into it. There are some very clever features being produced for it that will make creating sites easier.

Although I did announce this in the blog for BlackRabbit, version 2.0 is a total redesign on the scripting language. Integration in Cobweb will be much deeper, Hyper WEB will include ways to include sandboxed scripts into websites and Painter Pro and Wonderword will have better support. The current version of Elements will support version 2.0.

Recently, I stopped working on Cobweb because of a limitation of Windows preventing the use of the rendering engine of Internet Explorer 8 and above as part of any application apart from Internet Explorer itself. Due to a new feature brought to Cobweb, it is now possible to ensure that all versions of Trident can be used in Cobweb Internet Browser, and so version 2.0.1.319 has this feature. I will soon put the latest version up on the web. As Cobweb is my currently only finished product, feedback would be much appreciated.

The future for Wonderword stopped back in October 2012 because it was taking the place of nothing more than a web editor, script editor and more other things. Due to the fact that Hyper WEB and BlackRabbit do both of these, I have decided to revamp Wonderword. There is now the possibility of a full WYSIWYG word processing package, but this will need some investment. It cannot happen without support.

Current betas on Painter Pro have expired. To obtain another beta, please contact me. Painter Pro 1.2.1.6000 was the latest release and the next release will be 1.2.2.0, currently known as it's codename Aberdeen.

Work on VUEBB has also been slowed, but it will resume as soon as the next file extension library is complete.

Posted by jamiebalfour04 in Tech talk
hyper
web
html
developer
development
software
10 months down the line, what now do I think of my Nexus 7?
22Jul2013

One of the most upsetting things that can happen with any technology is that it starts to die, or die prematurely. This is exactly what has happened with my Nexus 7.

Many others have complained as well. Here is a list of issues:

Here's the proof it happens to others. 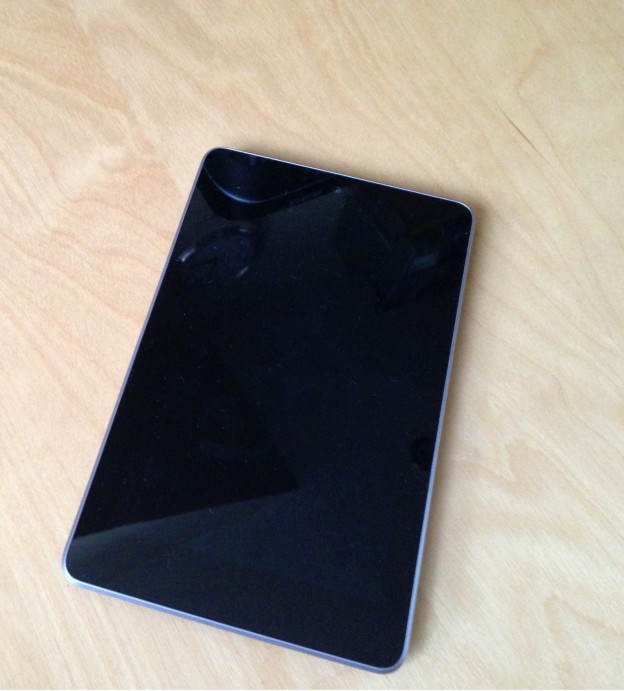 A recent survey of 150,000 PCs shows that Apple computers are the best at running Windows. Not surprisingly I have Windows 7 on my MacBook Pro. Unlike any of my other three current computers which are a custom PC, Fujitsu Lifebook T4410 tablet and an Asus Eee PC 1020, the MacBook Pro has never met any errors - despite the fact that it is used more than the latter two. After one and a half years running smoothly on Windows 7, it still outperforms my desktop getting to the Windows Desktop even after a reformat. My MacBook Pro has an i5 2.3GHz whereas my desktop has an i7 3.4GHz and double the RAM.

Anyway, here is the link for the information: