Apple's latest iPad Pro is a fantastic device that is packed with features. I decided after six years of owning an iPad that it was time that I bought a new one. I was originally torn between choosing a standard iPad and iPad Air but eventually, mainly due to the inclusion of USB-C, I would benefit more from the iPad Pro's USB-C. 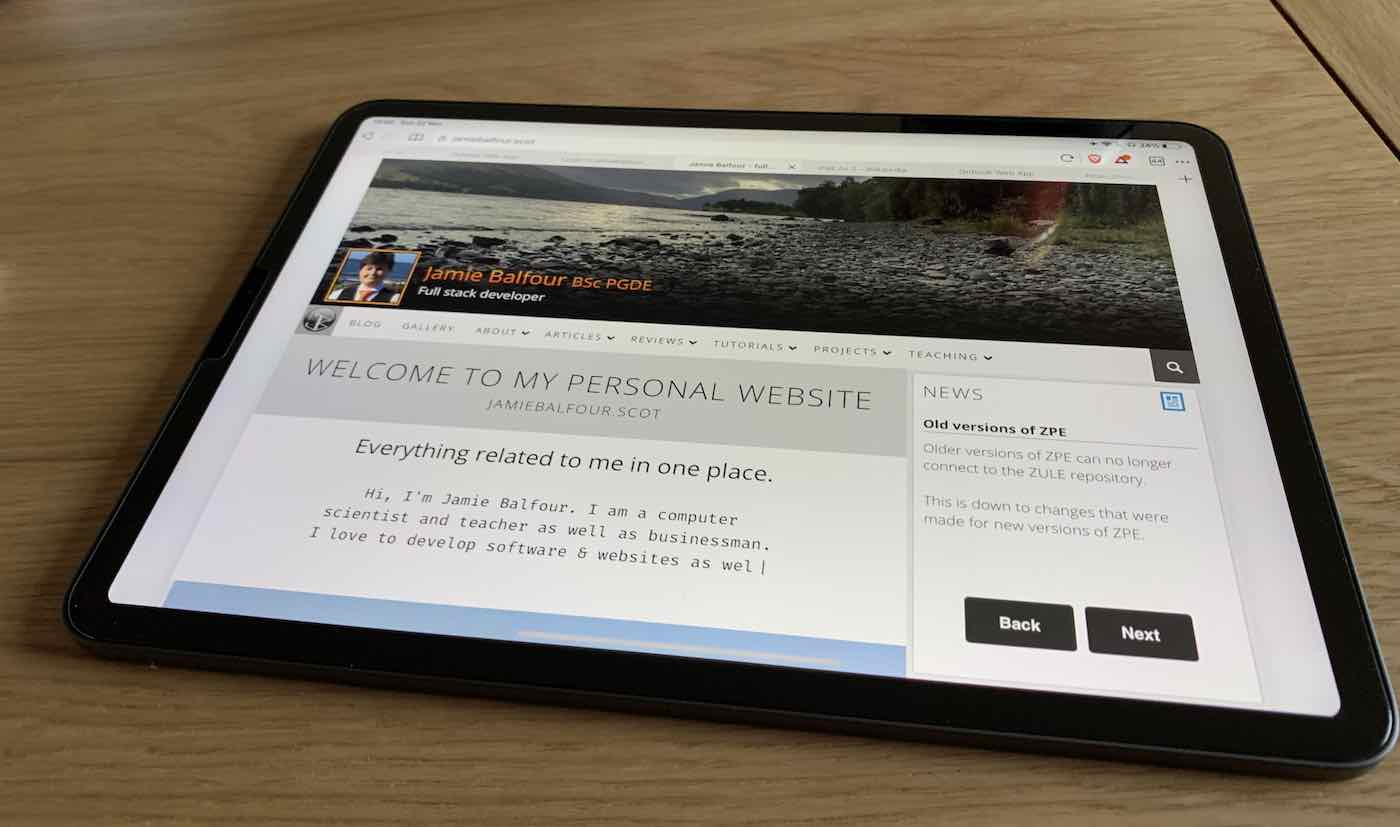 What do I use my iPad for?

As a secondary computing teacher (12 - 17-year-olds) I use my iPad to demonstrate technology in use. The USB-C port allows me to very quickly dock my iPad and connect it up to my screen and desk. I use the iPad Pro to do certain things such as showing pupils programs that I cannot run on the computers at work.

I also use my iPad as my machine for taking away when I need to go to client meetings as well as when I have been away on a break (for example, going to Perthshire recently, my iPad saved me having to carry around a heavy notebook PC).

Finally, my iPad Pro also has an Apple Pencil included with it which allows me to jot down ideas as well as sign digital forms very easily.

The iPad Pro has a very squared design with beautifully curved edges. It features Apple's very minimalist approach to design and features the slim bezels as found on the iPhones as of recent. At the top of the display, there is a small notch for the cameras and other required sensors. 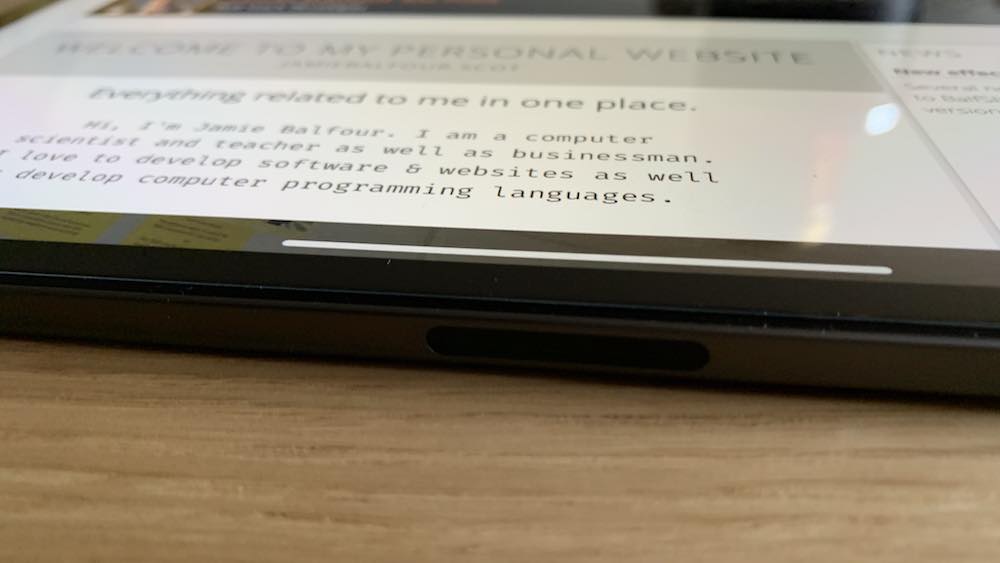 The top of the iPad Pro features a magnetic docking connector 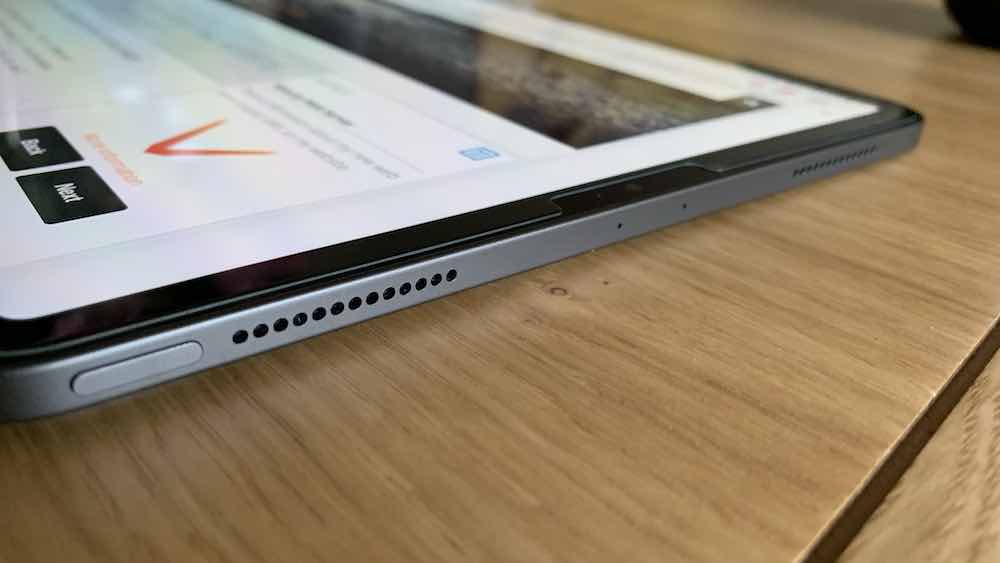 The right of the iPad Pro features another two speakers

The iPad Pro has abolished the TouchID found on similar devices such as the older iPhones and iPad as well as the Mac range. In its stead, Apple has opted for FaceID which uses the user's face to log in. This works almost seamlessly and is in fact slightly more secure than the technology it is replacing. 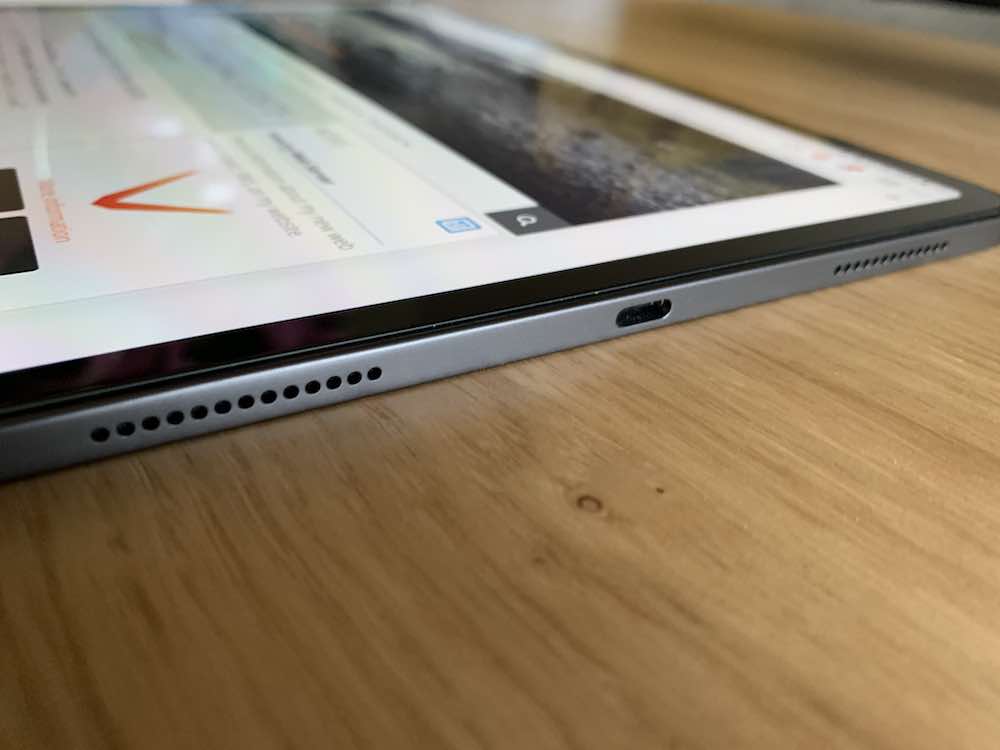 iPad Pro also features the relatively new USB Type C (also known as USB-C) connector for connectivity. Type-C is a very diverse connector (more here) able to support a range of different standards through one connector. As a result, the single USB-C connector that has replaced the absolutely terrible Lightning connector unifies the iPad into a standardised connector. This means a lot of things. The first is that I can use the same charger I use to charge my MacBook Pro, Razer Blade Stealth and in fact my HP ProBook G4 640 for all devices. Secondly, the USB-C connector permits the iPad to use a range of devices already on the market designed for use with USB-C devices such as a range of docks, dongles, and adapters and means that the adapters do not need to be designed by Apple. Thirdly, it is now possible to get 4K video from the iPad onto the big screen with ease. The aforementioned docks and dongles allow for video and USB signals to be used simultaneously, amongst other things.

The iPad Pro also features one of the best HDR displays I have ever seen on a device. With the 11 inch display, colours are very vibrant and clear and the 1668 x 2388 pixel resolution (approximately 265 ppi density) is amazing. The display uses IPS technology and supports Apple's True Tone technology alongside a 120Hz refresh rate. Finally, the display has an amazingly bright 600 nits maximum brightness.

Further to the display, the audio quality on the iPad Pro is on par with that of my MacBook Pro thanks to its quad-speaker setup.

The iPad Pro also features the ability to connect to the second generation of Apple Pencil allowing the user to draw on the display with it.

Apple claims that the iPad Pro has one of the best performance-per-watt ratios of any modern-day computer system, claiming its performance is comparable to that of an Intel Core i7 and that the Apple A12X processor found in the iPad Pro performs better than most PC laptops. The iPad has an octa-core CPU (4 2.5GHz Vortex performance cores and 4 1.6GHz Tempest efficiency cores) and 6GB of RAM which makes it a very powerful computer indeed.

The iPad Pro supports built-in storage in capacities of either 128GB, 256GB, 512GB or 1TB of solid-state storage. This storage is lightning fast and you will not notice any performance issue with this (unlike some cheaper tablets where the storage is the biggest throttle on the system).

Apple has gone all out with connectivity on the iPad Pro. The Pro features WiFi 802.11 a/b/g/n/ac/ax (under the new WiFi naming conventions it has WiFi 6). It also supports Bluetooth 5.0 and the usual GPS assortment.

Apple has chosen to continue to leave NFC out of the iPad Pro, leaving that still within the iPhone and Apple Watch only, which although for most activities such as purchasing makes sense it would have been nice to have had this for things like writing to NFC cards.

Apple also has not added the 5G standard to this iPad which if the cellular version is selected will only feature 4G LTE.

The iPad Pro also features USB Type C version 3.1 and the magnetic connector found on previous generations for attaching keyboard cases (and Apple has also launched a better keyboard and trackpad version of their case).

As expected, the iPad Pro features no headphone jack but does work really well with Bluetooth earphones and headphones as well as Apple's own AirPods. 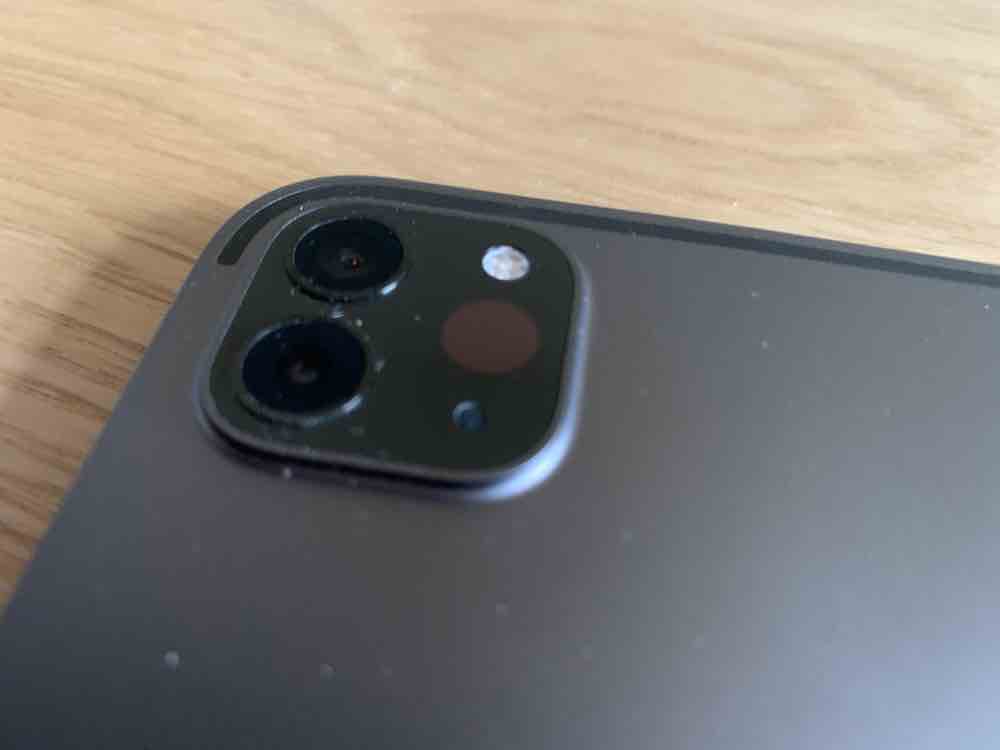 The new dual cameras with LiDAR

The cameras featured in the iPad are never meant to be the main selling point of it, but they have their uses. The iPad features four cameras. Three on the rear and one on the front.

The iPad also features Apple's revolutionary LiDAR scanner to help calculate the distance between the iPad and an object. It allows for better augmented reality as a result of this new sensor. 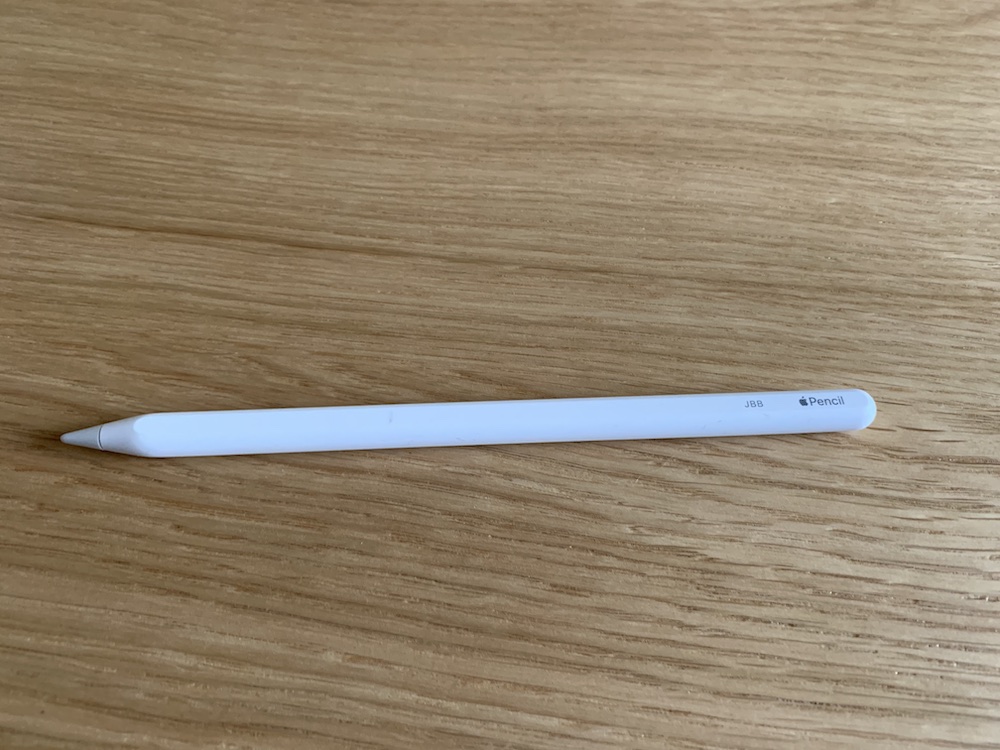 The Apple Pencil that I chose to purchase with my iPad Pro comes in at around £130. The Pencil allows the user to draw on the screen of the iPad as several tablets have done in the past (including my Fujitsu LifeBook T4410).

The second generation of Apple Pencil is amazingly responsive and very comfortable (especially compared with the original Pencil). It features a single method of interacting through the 'button' on the device (a section where if you tap twice it will trigger on the iPad). In certain apps, this will switch between drawing and erasing.

The Apple Pencil connects to the iPad using Bluetooth and charges and stays with the iPad through the magnetic connector.

In conclusion, Apple has done it again. The iPad Pro is magical and exceptionally powerful. As a computer scientist, I am always impressed with the manner in which Apple manages to capture the pro audiences with their iPads in different ways and in my everyday workflow, tablets do not get a huge amount of usage. However, I could see one or two benefits of getting an iPad Pro.

But I am not surprised by the performance of the iPad Pro, it's exactly what I've come to expect from Apple's own silicon manufacturing and what I expect when Apple launches its new processor range for the beloved Mac in October or November this.

The iPad Pro has a steep price for what it is, but do not forget you get the best-in-quality combined with performance. A lot of time and money has gone into the research that makes the A12Z APU as powerful, responsive and intelligent as it is. The iPad OS experience is always getting better too, I still have a range of other iPads some running iOS 12 (for example my iPad Air first generation) and the difference between the operating systems is considerable. Multitasking is a pinch or two and it is so seamless.

I'm very happy with my iPad Pro and anyone who can benefit from the incredible, fanless performance will love it too.