This post is a collection of all the information you will need from the keynote today. I will likely do a full review of this in the next few hours.

The start of the keynote was all about Watch OS 2 and what it has brought to the Apple Watch. New Watch apps include Facebook Messenger, a Go Pro app, iTranslate and a new app for measuring pregnant mothers.

Tim Cook talks about how the iPad has changed the way we work and create. Now Apple asks itself how they could improve it. The result, the biggest change in the history of the iPad: the iPad Pro. Does this mean I will need to update my website's media queries?

The Pro looks beautiful. The iPad Pro is twice the height of the iPad Air 2 in width. It has 5.6 million pixels with a resolution of 2048 by 2772 pixels on a 12.9 inch display. It features an Apple A9X APU which is now 1.8x times faster than the iPad Air 2 in CPU performance and 2x faster in graphics performance. It is faster than 80% of portable PCs sold in the last year and faster than 90% of PCs sold in the last year in terms of graphics.

All this, and still ten hours of battery life and incredibly slim (6.1mm)! It also features a four speaker audio system.

The iPad Pro was actually expected by many, so the shock was rather small for me!

Apple also introduced the Smart Connector, which allows a new physical Smart Keyboard to be attached to physically to the iPad and whilst I do not like the looks of the official keyboard but the physical connection is a huge bonus!

Apple also spoke about a new accessory called Pencil. Pencil is basically a really awesome stylus for the iPad.

Microsoft had a say today at the event as well - they announced that they were bringing features for the Pencil to Microsoft Office that allow input from the Apple Pencil. It's nice to Microsoft and Apple working together on this.

Adobe also spoke about their new apps that are coming to the new iPad. Adobe Comp looks really impressive (maybe not something I would use) and the multitasking works so well with it.

The iPad mini 4 also got a short introduction. It is simply a smaller version of the iPad Air 2.

Today, Apple "did something" about the lack of innovation in the TV industry.

The new remote uses a new touch surface that makes it fluid to move around. This is a more innovative way to interact. The new Apple TV also supports voice commands through Siri.

The Siri search also searches across multiple apps including Hulu, Netflix and iTunes, all in one search. Siri can also rewind the video and put subtitles on when you mention that you missed what someone said!

There was a lot of focus on the new screensaver features, which doesn't really interest me but there we go. There was a bit that really touched the inner Bond fan in me as well which was nice!

The games coming to the Apple TV look incredible.

Unfortunately, Tom from Hipster Whale didn't make it across the road in Crossy Road. Crossy Road looks lovely on the new TV, but I'm not sure I'm that thrilled by the idea of games on my Apple TV with the remote.

Apple has also taken the concept of hand off further by allowing you to continue playing games you own on your iPhone and Apple TV.

The new iPhone 6s looks exactly the same as the iPhone 6, but it changes are phenomenal.

Multitouch is replaced by a new type of interaction called 3D Touch. As expected, this is a similar technology to the new Force Touch Trackpad found on the new MacBook. iOS 9 deeply integrates this to allow contextual data to appear where it could be considered useful. I really like the looks of this and cannot wait to try it out in the next few weeks. At this point, 3D Touch looks well integrated  into iOS.

The new camera is 12 megapixels, which will increase resolution but not at the price of quality. The new camera seems to take great photos. It can now take 4K video (that's 8 million pixels!). The front FaceTime camera now also has a flash that uses the display of the camera using True Tone technology.

Live Photos now also add a small video to the photo, which allows the photo to transform to something that moves.

Apple are also adding a new Android transfer app that they consider the 'neighbourly thing to do'. This allows Android users to transfer much easier.

Apple are also launching a new iPhone Upgrade Program that entitles you to a new iPhone every year and includes an unlocked iPhone and AppleCare.

The best news, iOS 9 will launch on the 16th September.

The new ad had a slight rip off of the 'Okay Google' adverts but it was very Apple.

Tim Cook made a really nice tribute to the all the Apple employees and there was, as always, some live music (this time from One Republic) and a song specifically for Tim Cook.

And that is it for another year from Apple. 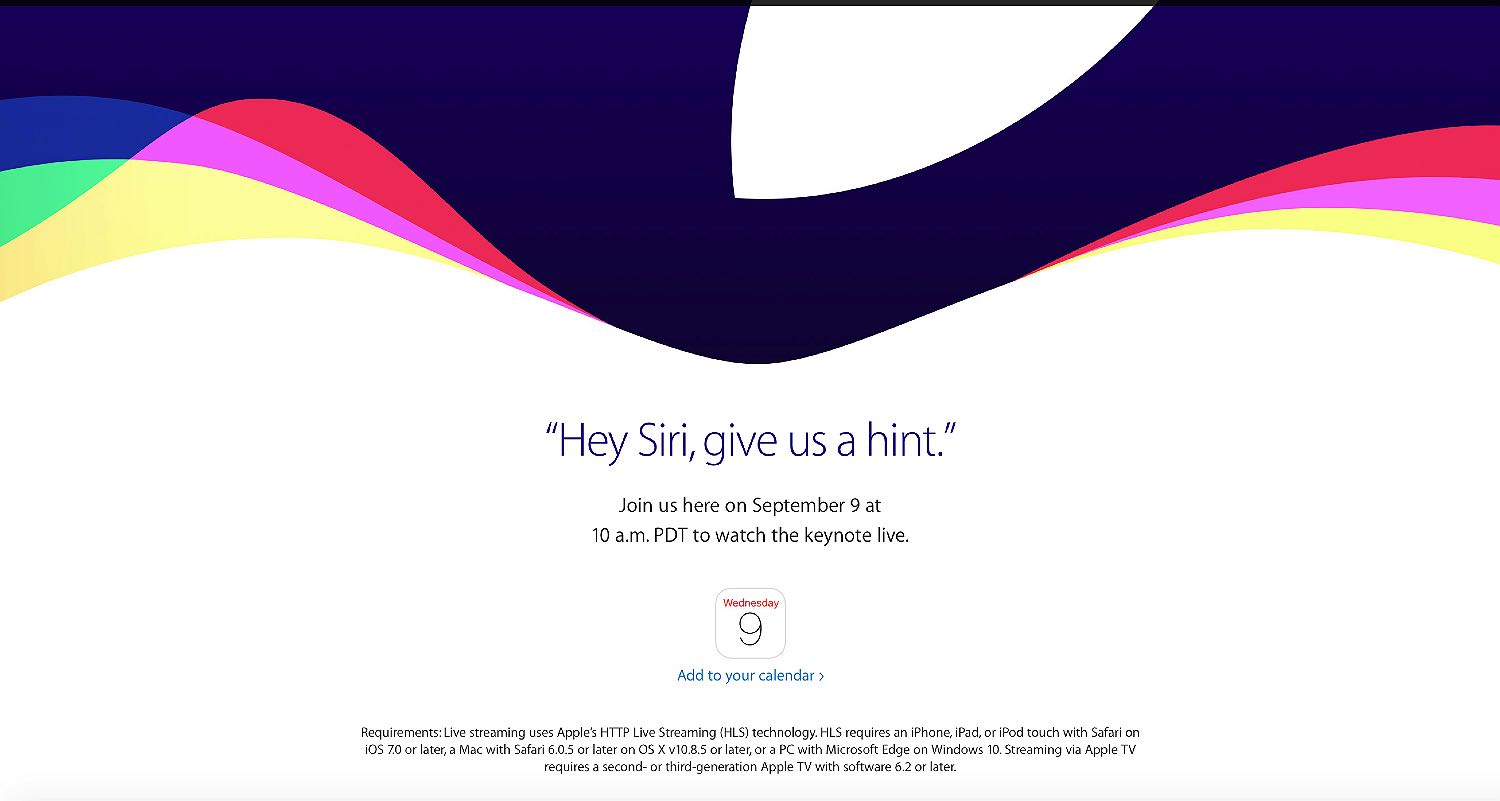 Possible releases could be a new Apple TV, a bigger iPad, the iPhone 6s, new Macs and more information about the new OSes.

I would love to make a liveblog on this, but unfortunately my host runs an Apache server and not an nginx server therefore every livepost I make ends up overloading the server so I will do a summary post at the end.