Since I was 16, all of my TVs have been manufactured by the wonderful Samsung. I've had brand loyalty to them since then.

First was my Samsung SyncMaster 940MW which I got in 2006 and was more designed as a computer monitor than TV but was my first HD display (720p, admittedly). In 2007 I bought myself my first proper TV and one of the first Full HD displays to exist, the Samsung M87 (one of my friends still has this TV). In 2011 it was time for another new TV with the Samsung C750 - a fantastic set that lasted a total of 7 years without any problems and I'm hoping to keep it for when I get a spare room for it. But this time I've gone for a Sony. 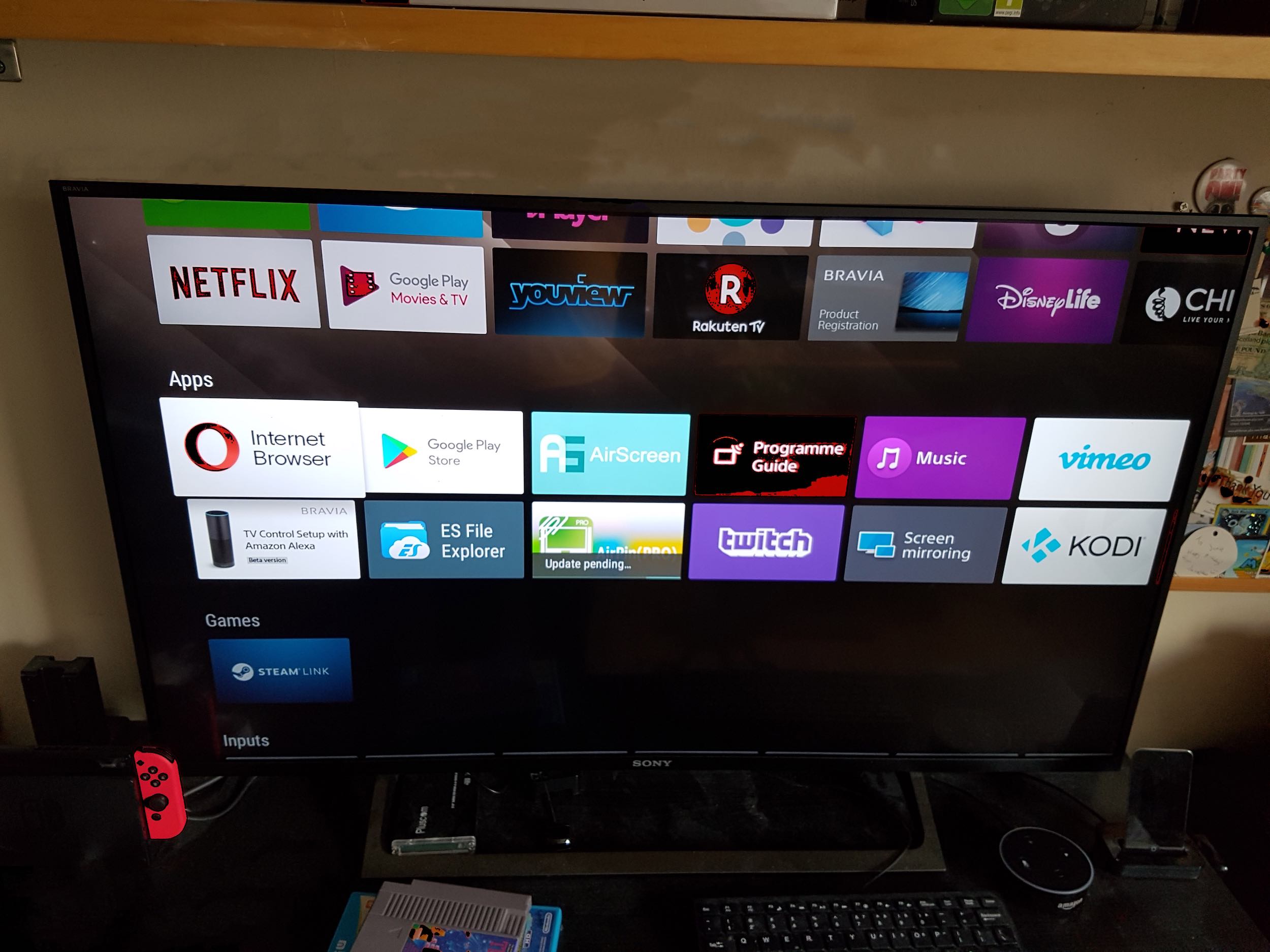 So why the change to Sony, especially after my review of the X830C was complaining about performance issues? Well in this review I intend to look at whether or not Android is now fixed for the Bravia range released two years after testing my first Sony TV. This review specifically looks at the XE8004v.

My Samsung C750 was dated and still used non-LED backlighting. After buying a new computer monitor I really wanted to get myself a new TV - it was originally a decision between the two but it became apparent that I did need a new TV as well.

As the local tech guy myself, I was approached in August 2016 to help one of my mother's friends find a select a new TV. We decided on the X830C for her.

In 2016 my parents needed a new TV as the Samsung B8000 they got in 2009 finally gave up. They purchased a Sony X830C as well and I decided to review it. I was absolutely astonished at how poorly the system performed in certain things and it's gotten worse over time. I'm still amazed that Sony's support did nothing about this issue and we've been left with a pretty useless TV that's actually already being considered for replacement.

So why the heck would I even consider a Sony for myself?! My personal requirements are very specific - four HDMI ports is an absolute for me now as my setup is geared for that. Component video is still a must and the ability to use composite video is also a requirement. It must be one of the bigger brands - Samsung would have been preferable but this didn't marry into my requirements list well. Other brands I like follow this order: Panasonic, LG, Sony then JVC. Sony is pretty low there.

So how did Sony get me?! In one word: Android. I've always been a fan of standards and Android is pretty ubiquitous so it's almost as though it's a standard and its not going anywhere. This is important, particularly after my C750's smart TV capabilities are no longer really active. So in this review, I'm going to look at this new TV and decide whether it was the right decision or not.

The XE8004 features a modern-looking, pretty thin design. It focuses on simplicity over functionality and as a result, has no buttons on the front of the TV. The bezel is very small at around 1.3cm as you can see in the following picture. 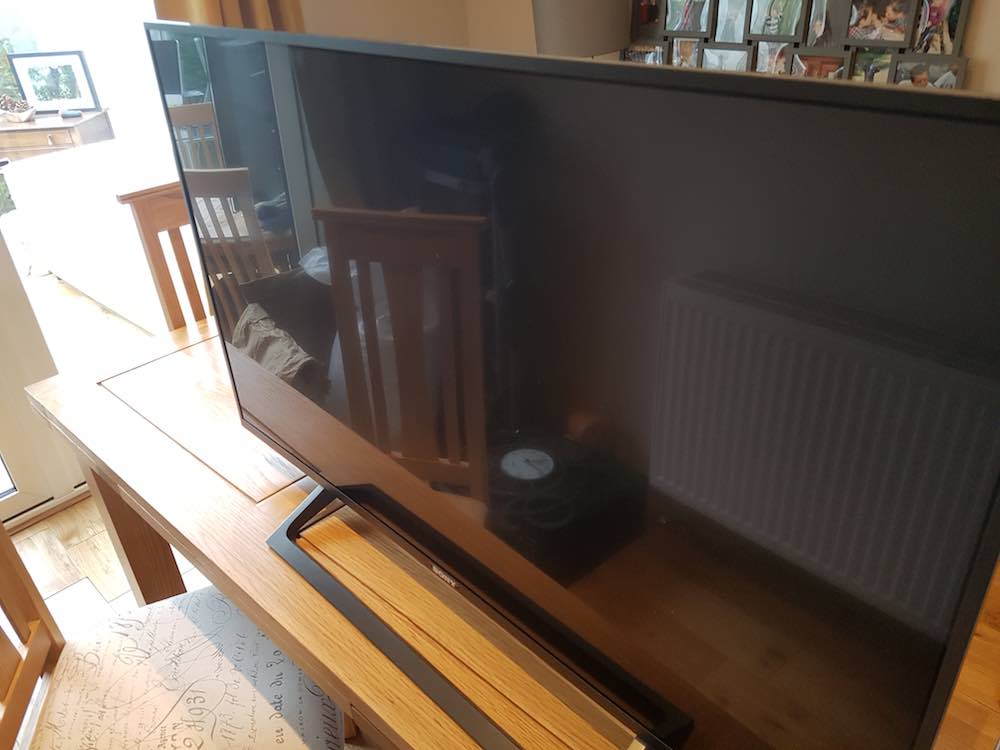 The TV is quite attractive from the front 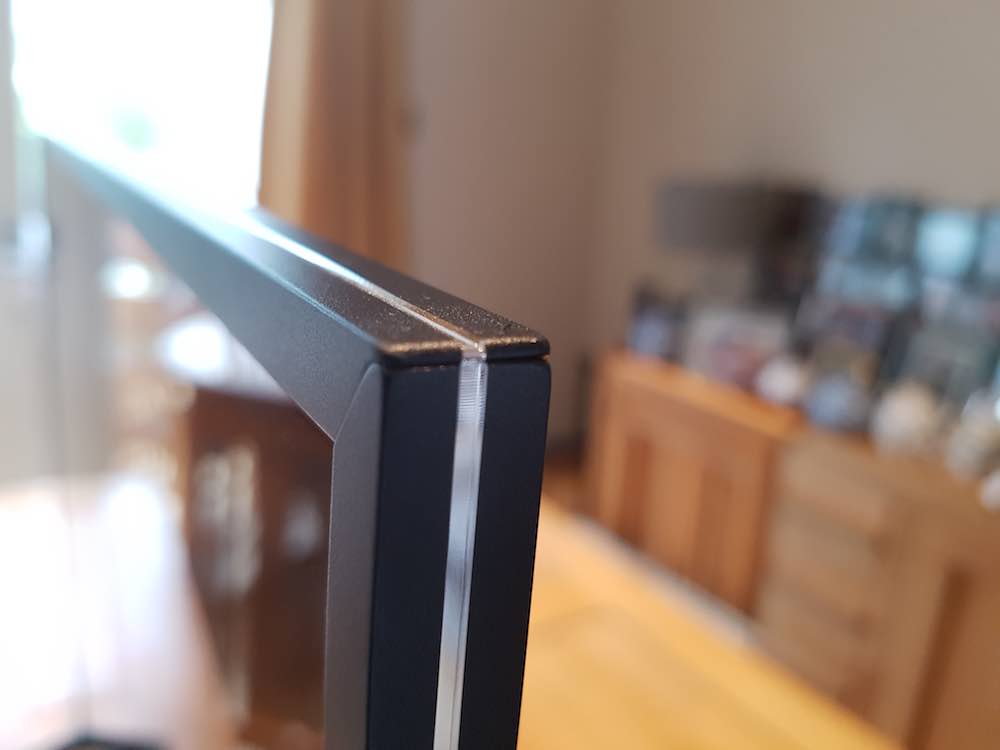 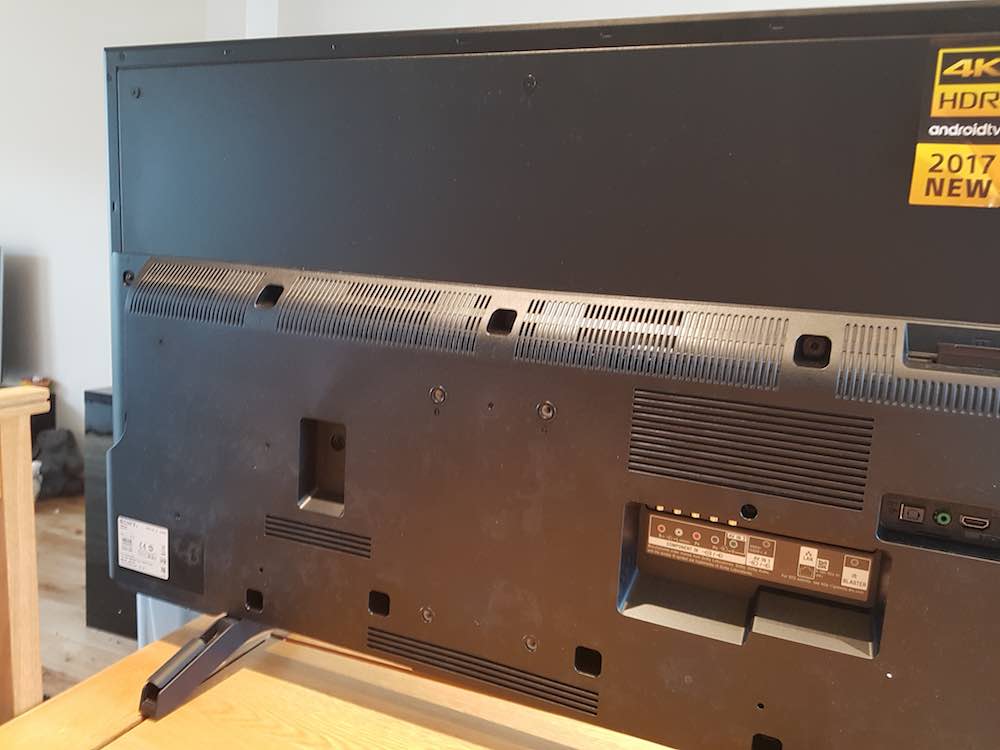 The rear of the Sony X830E is quite plain 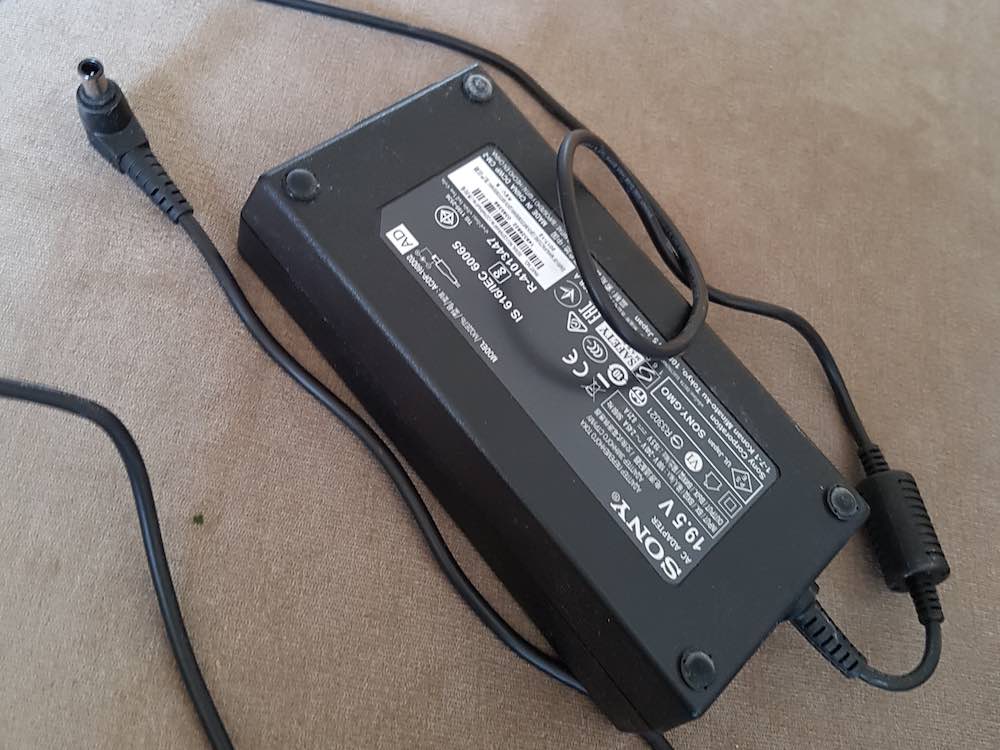 The front of the TV is made from metal and the rear is made from plastic - but it doesn't feel cheap. Small screws support the display and give it a firm feel and prevent it from wobbling around too much. The stand is also plastic and although it feels and looks better than the one found on the 2015 models, it does not feel as durable.The stand features basic cable management that allows cables to be routed down the back. 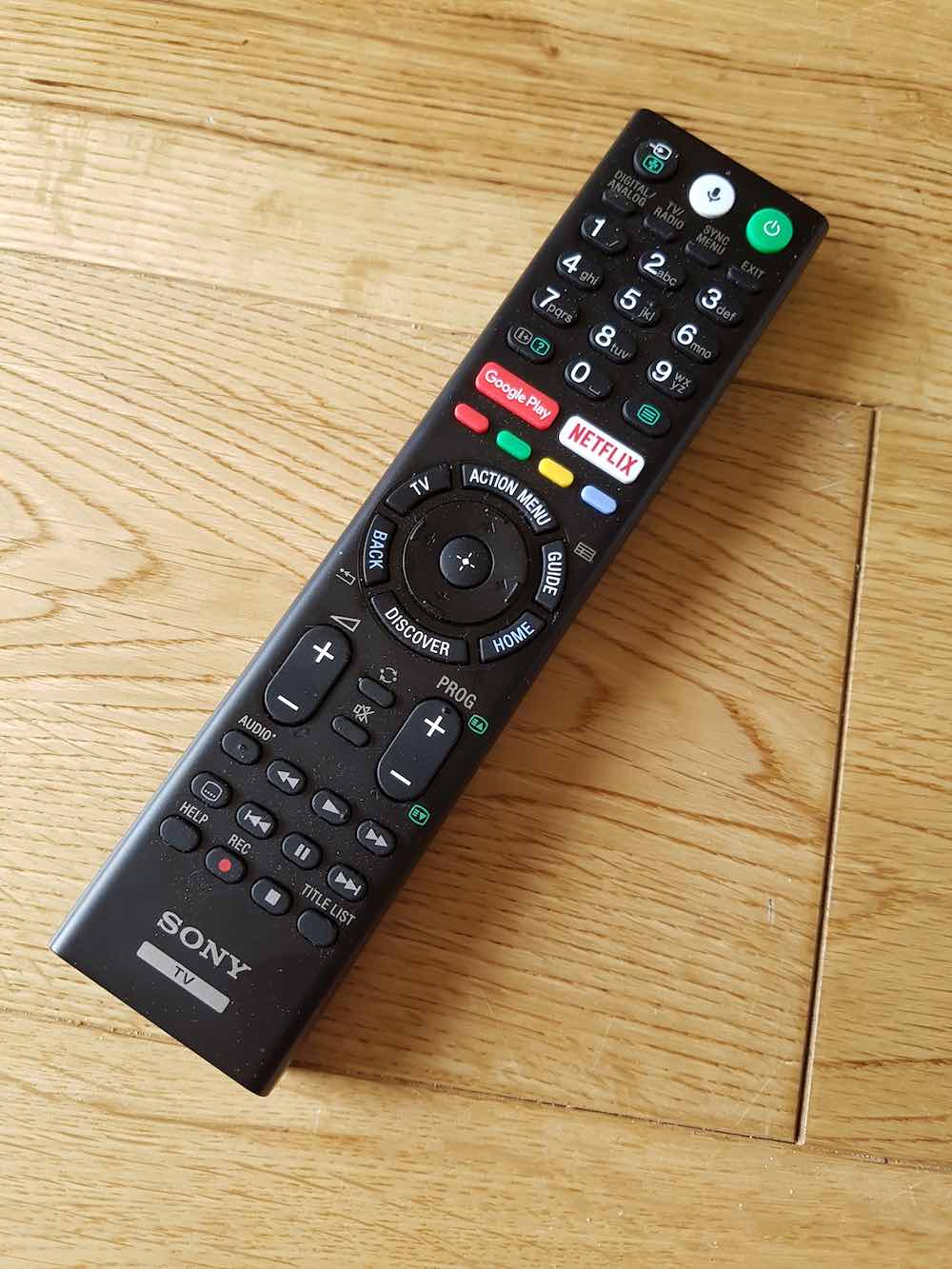 The remote looks very simple but does the job. 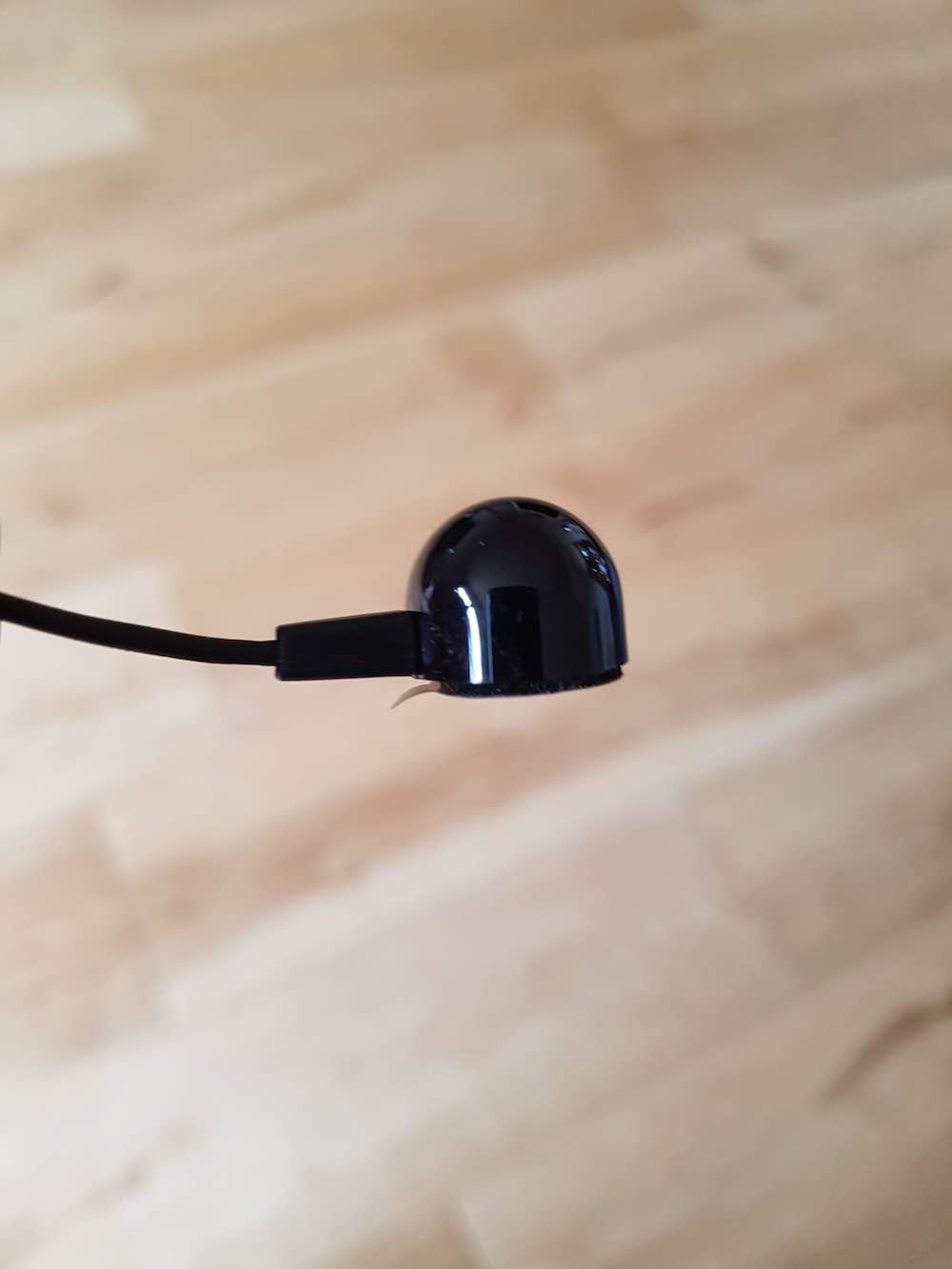 The X830E also includes an IR blaster to control other devices.

The remote control (pictured) is a bit simple looking, especially when compared with how Samsung's 2010 remotes felt for the time. Voice control is available from the remote using Google's search feature but note that this requires a separate Bluetooth connection to the TV which will drain the battery life quicker.

The Bravia is a moderately high-specification smart TV running Android. This means it receives a lot of attention from app developers, perhaps more than the Tizen operating system found on Samsung (though Tizen is a better optimised operating system than Android is at present).

It features a 4K IPS panel with HDR (High Dynamic Range). Using IPS (In-Plane Switching) for the display technology means that it has a high viewing angle of 178 degrees from all angles. The display is a matte display meaning it doesn't reflect too much. I have noticed a bit of reflection from my lamp directly across the room from the TV that is sometimes irritating in dark scenes.

It features a quad-core CPU and is powered by the 4K HDR X1 engine processor that's designed to improve performance over the 2016 models. The processor still is somewhat less than powerful enough to run Android smoothly, but it does the job (you do need to keep closing other apps when using an app with it though).

In the picture quality department, this Sony TV doesn't do as well as some of the Samsung or LG TVs I have seen out there. The black levels aren't brilliant and it performs exceptionally poorly in a dark room due to a bit of backlight bleeding and pretty poor contrast ratios. The Sony TV also doesn't feature local dimming which is disappointing. Colours are, however, very vivid thanks to Sony's Triluminous Display.

Of course, the XE8004 also is a 4K TV so it supports a maximum resolution of 3860 by 2160 or UHD resolution and can upscale FHD, HD and SD content to 4K. The interpolation on this display is however subpar and upscaling from 1080p to 4K from my computer as the source did not bode well for the XE8004.

Running on Android means a whole lot to this TV and was the sole reason for me choosing it over my more preferred brands. Android features an absolute plethora of apps ranging from Prime Video and Netflix to games. Actually, on the subject of games, I downloaded a simple racing game that I got for free with TV and gave it a shot and the TV simply could not cope with it and the game was far too demanding and was giving me around 10 frames per second, so it's clearly not capable of running intense apps like this.

Android also allows you to use Chromecast to send across the display of a laptop straight to the display which is a nice feature. This works well and is easy enough to do.

Menu operation on Android is a bit difficult to understand initially, but you get used to it. The menu feels well designed but the main issue with it is that certain apps cannot be hidden on removed and coupled with a processor that sometimes struggles, the cluttered menu sometimes is a bit sluggish. In fact, sometimes sending commands takes a few seconds with the menu.

Now for my favourite bit. The Sony XE8004 is a great TV when it comes to connectivity. It provides: 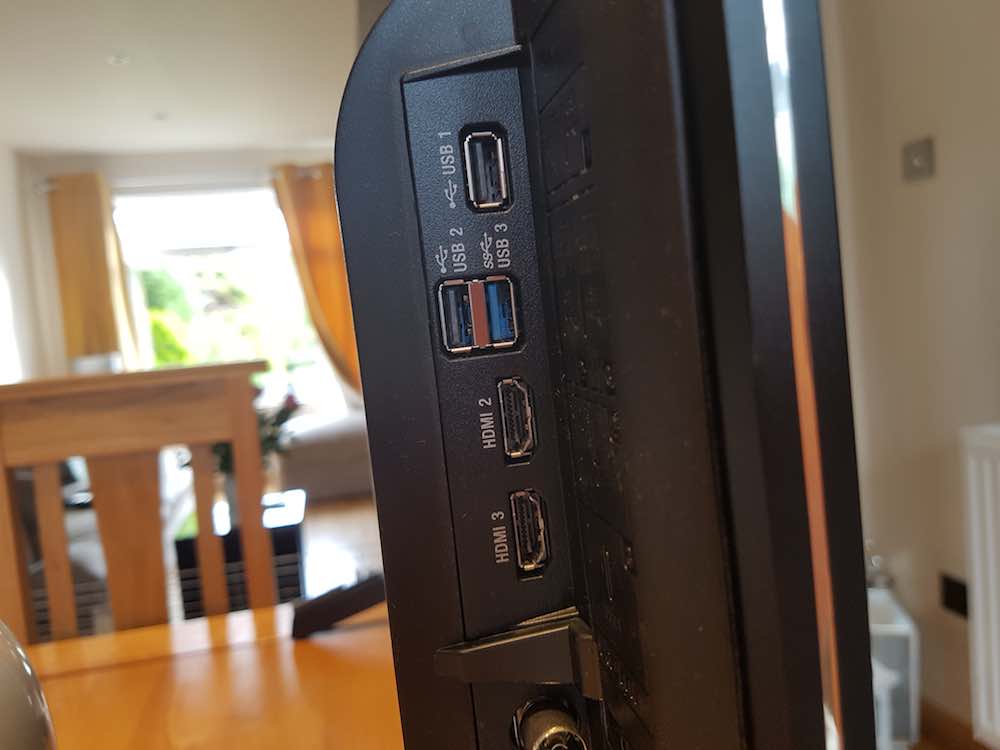 There's a lot of connectivity on the left side. 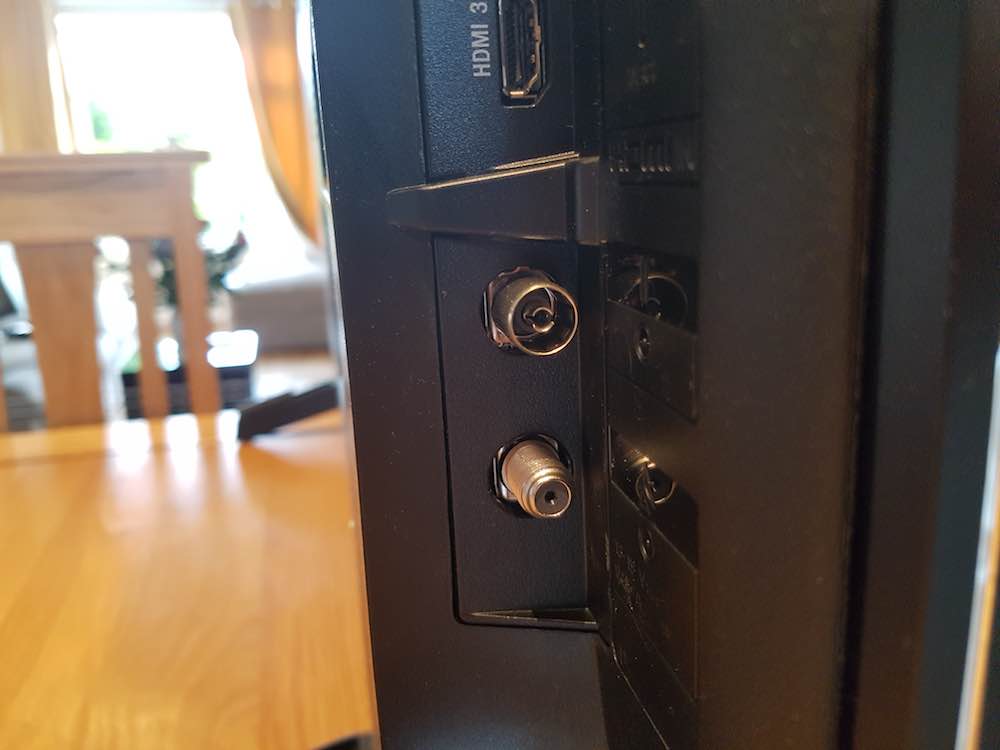 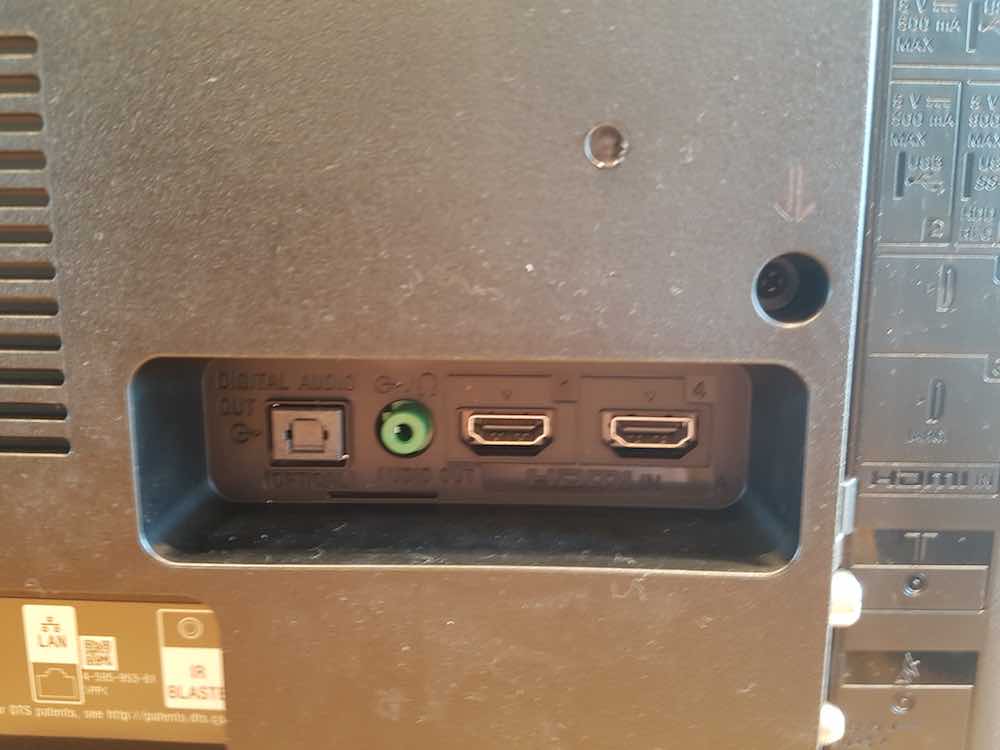 There's even more HDMI ports on the back. 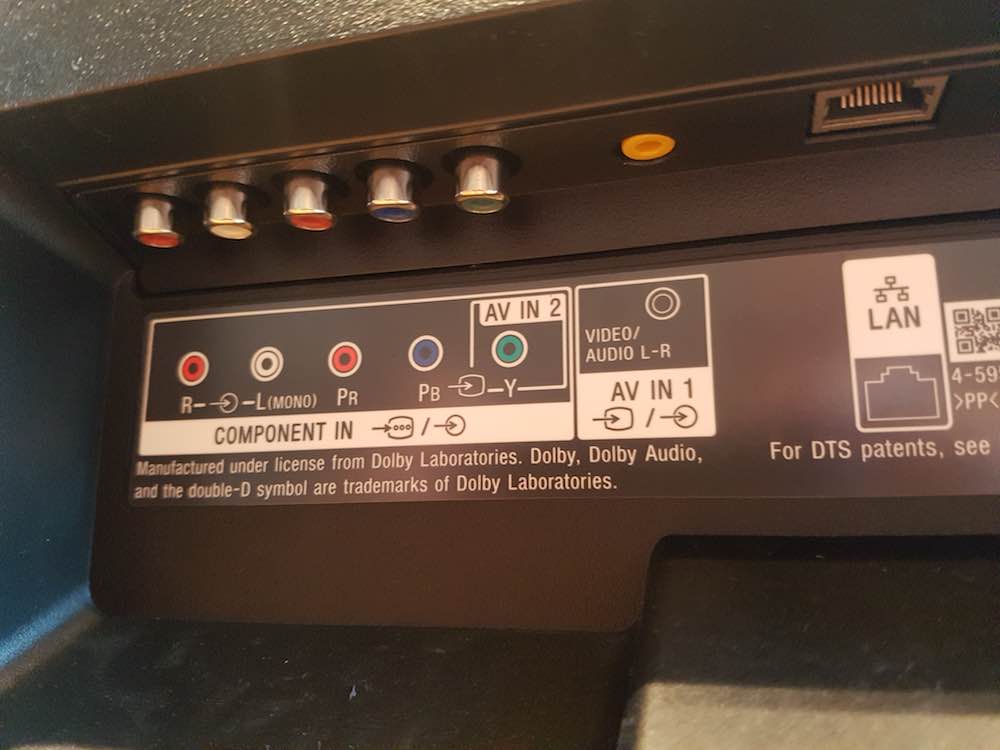 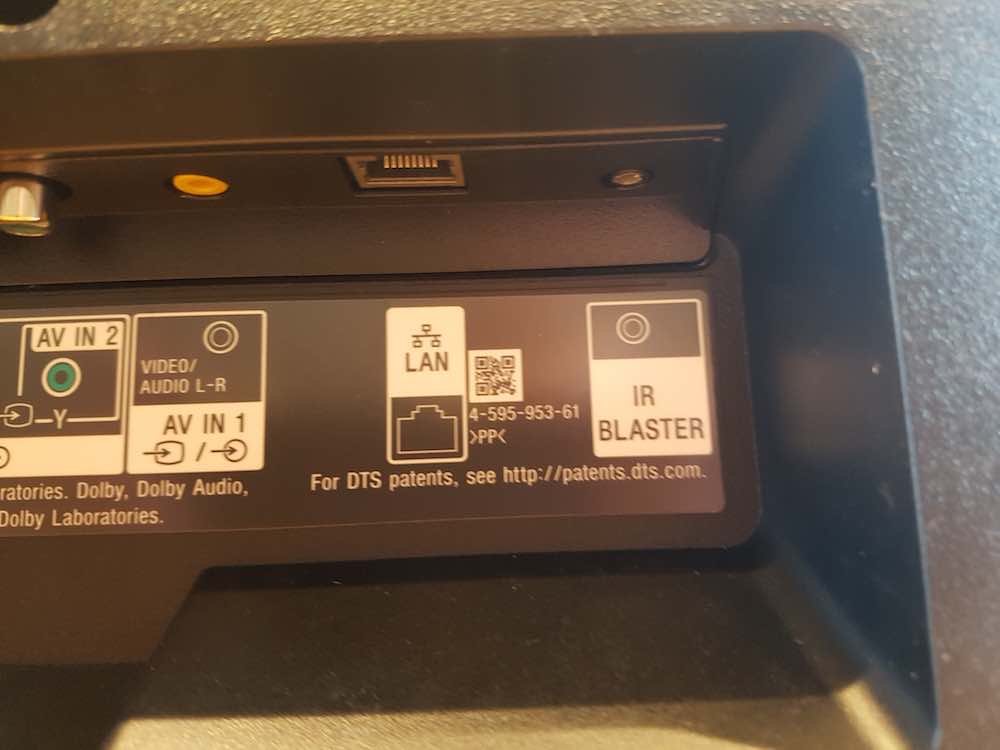 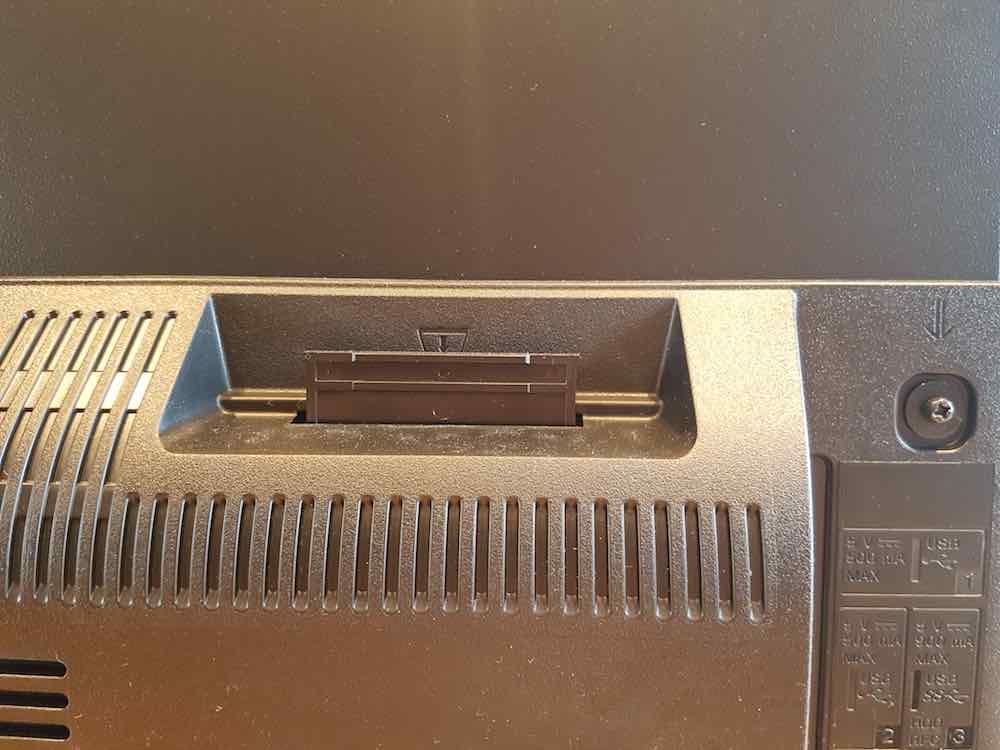 Finally, there's a Common Interface slot on the rear of the TV

In my personal opinion, the Sony Bravia XE8004v is a fantastic television let down only by a few small things. On paper it's perfect. But the reality is that the performance of the TV is not amazing - it's let down by a processor that's slightly underpowered making some tasks sluggish and a low contrast ratio that means black levels look oversaturated from time to time. I had hoped that Android TV had been fixed for this new TV released in 2017 since our 2016 model downstairs really struggles even with the basics as a result of the resource-demanding Android operating system.

I mentioned at the beginning how cautious I was about buying another Sony TV after the last one's performance issues and indeed it appears that it has not yet been addressed fully. However, if you can live with these issues then this is a fantastic television with excellent colour reproduction and running on within the Android ecosystem where there are tons of apps already available.

I have since had to return two of these displays and in the end decided to get a refund on it due to the fact tiny little harvest or thunder flies have managed to get inside the display. Unfortunately, despite really loving this TV, it shows bad build quality if both the original and the replacement TV have this problem. I am now back to Samsung again.
Posted by jamiebalfour04 in Technology
sony
xe8004v
x8000e
x8004v
bravia
android
tv
smart
2017
Comments
Powered by DASH 2.0 (beta)
News
ZPE 1.10.12
ZPE 1.10.12 (Zippy Zebra) is now available to download. The last release of the year brings a few important changes.