Apple has been consistently improving their much-beloved smartwatch for a total of six years now. The Apple Watch has gone from being something that started off with major attention to something that became some kind of thing that a lot of people just had. My history with Apple Watch stretches back only a few years, given that my first actual Apple Watch was a Series 5 (apart from a Series 1 with a cracked screen that I bought for a project that never happened). This means my first Apple Watch was bought in 2019.

As many who follow me on Twitter or my blog will remember, I was very anti-wearable technology and believed it had no place in my life. How wrong I was.

Over the last few years, Apple has been losing its ability to innovate and come up with new features to add to iPhone and Apple Watch, but that doesn't make their products bad, it's just that they aren't really as exciting as they were ten years ago (or even just five years back). Spoiler alert: Apple Watch Series 7 isn't all that different from last year's Series 6 and it's not all that exciting, but there are new innovations compared with my Series 5 that I will look at in this review. 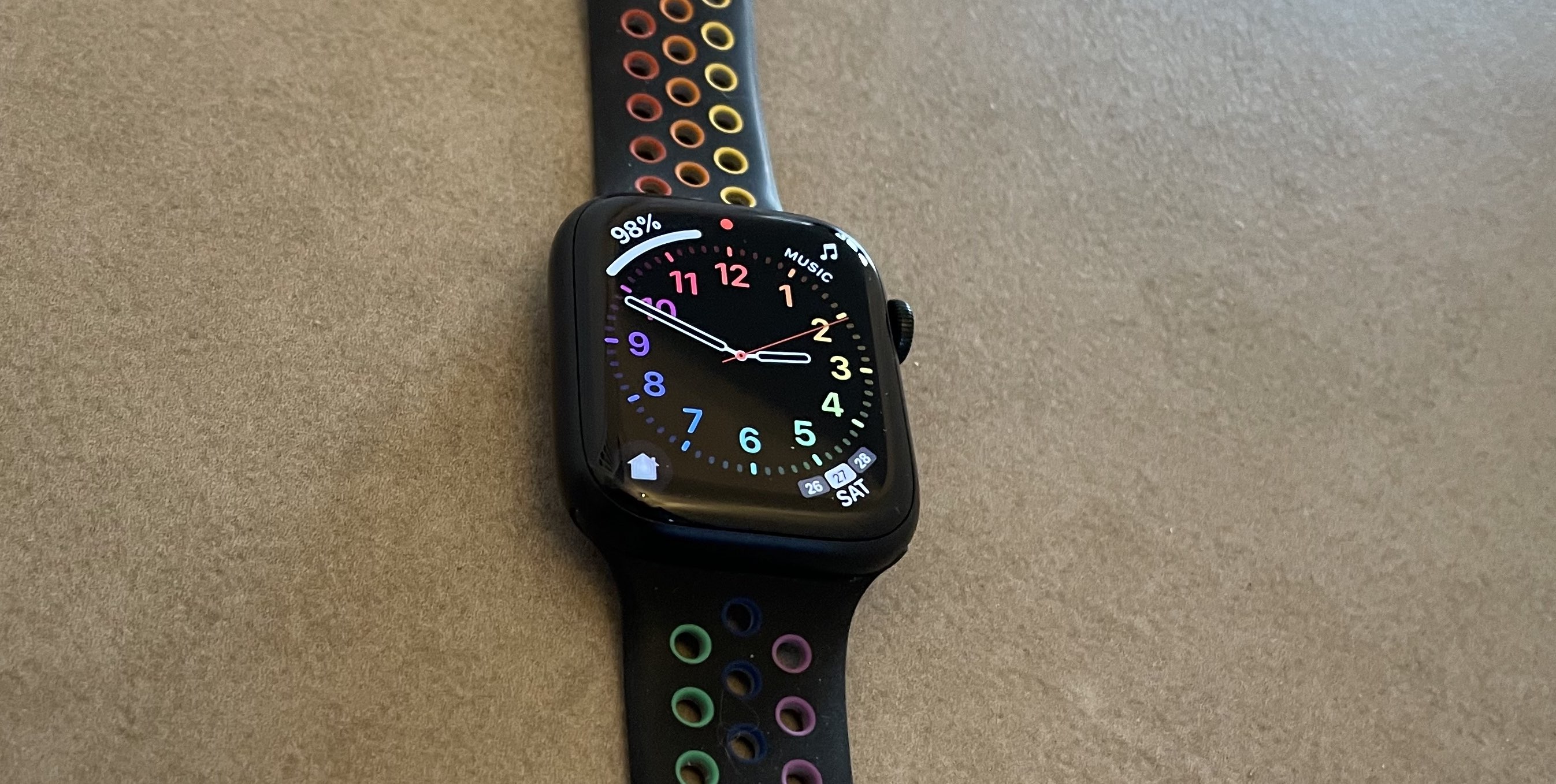 The design of the Series 7 is fairly similar to the previous models, except with a 20% larger display - and boy do you notice the bigger display! The borders of the Series 7 are just 1.7mm wide, compared with Series 6 and 5 which had borders of 3.0mm. As well as this new stunning display, the 7 also features a more rounded display, which I really like. This means the apps go pretty much to the edge of the face. It's very noticeable when you put the two models side by side.

The display is now what Apple describes as crack resistance (and according to Cult of Mac is made from crystal). Much like previous Apple Watch models, the Series 7 is not designed to look like a stunning timepiece but rather a gadgety tool. The new 45mm model now features a 396 by 484 pixel display, which measures 1.9" on the diagonal. The Series 7 also features a much brighter 1000 nits display as well, which makes it incredibly usable outside.

Like its predecessors, the Apple Watch Series 7 features just two buttons. Unlike previous models such as Series 5, this model only features one microphone hole on the left side (pictured). This makes no actual difference to the use of the microphone, however. As you will notice, the digital crown on my watch has a little red circle. This differs from my Series 5 because this year I went for a cellular model. 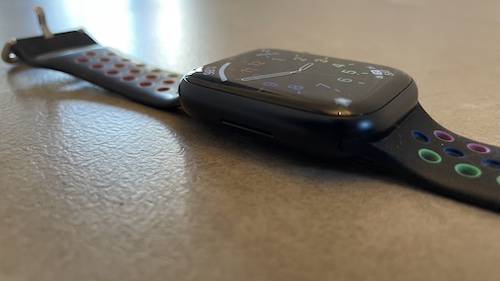 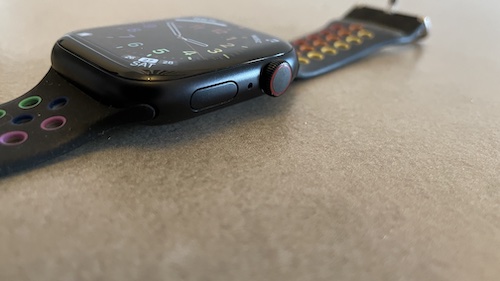 Much as before, the Series 7 charges using magnetic induction much like a toothbrush. However, Apple has ditched the old USB Type-A connector based charger and moved to the more modern USB Type-C connector which allows the watch to charge 33% faster than before. I'm a big fan of this and have regularly been using the fast-charging capabilities of this compared with my older charger docks that I have accumulated over the years. Looking back at my Series 5 review I mentioned that I thought the cable was poor quality, I still stand by that I do not trust Apple made cables with this model.

The Apple Watch Series 7 has similar specifications to last year's Series 6. It has been speculated that the S7 system-on-a-chip (SoC) is identical to the S6 of last year but with more efficiency improvements added to make the battery life that bit longer on the Series 7. The S7 features the same dual-core processor and PowerVR GPU as the S6 (but perhaps with more efficiency changes made).

Like previous models since the Series 5, the Series 7 also features 32GB of built-in storage (that still blows my mind, since my first iPod Touch was 32GB!). This gives you plenty (and I mean plenty) of storage space to store apps, music and photos. I will point out however that there is a restriction on the amount of media you can actually store in this 32GB of space, limited arbitrarily by the operating system.

The Series 7 measures in at about the same specifications as the Series 5 that I had before (apart from the larger screen sizes). The 45mm model, which is the equivalent of the 44mm Series 5, is the same measurements in width, coming in at 38mm and in height is only 1mm larger coming in at 45mm. It has a maximum depth of 10.7mm which makes it still quite a large smartwatch when compared with some others that I have owned prior to the Series 5 (but remember it is much more capable than most smartwatches).

In terms of connectivity, the Series 7 also features WiFi 4 (802.11b/g/n) and supports the 2.4GHz and 5GHz bands, Bluetooth 5.0, NFC (Near Field Communication) and GPS, making its connectivity identical to my previous Apple Watch Series 5. My model also supports LTE (4G) and UMTS (3G) communications allowing it to work without an iPhone.

Like Series 5, Series 7 includes an accelerometer, gyro sensor, heart rate sensor, barometer and a compass as well as an ECG sensor in the digital crown of the Watch. Like Series 6, Series 7 also features an SPO2 sensor that allows it to check blood oxygen saturation. 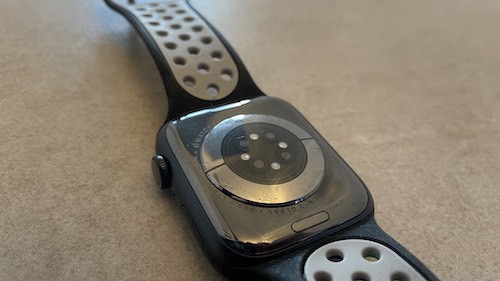 The Series 7 features a large array of different sensors

Much like previous models, the Series 7 is IP68 water and dust resistant. However, according to Apple, it can now be taken to depths of up to 50 metres instead of just 30, again meaning it can be used whilst swimming.

Apple claims an all-day battery life with the Series 7 as they have done with previous models. However, they also claim that it can do up to 18 hours of use under normal circumstances:

My main criticisms are still of the software that runs on the Apple Watch in general. Most of the issues I spoke about in my review of Series 5 still have not been fixed. Another issue I have been having since my new Apple Watch is Airplane Mode. The problem I have is that when I turn off Airplane Mode, my Apple Watch switches on WiFi and Bluetooth as well as cellular data which is not really what I want. There is no way of configuring it to just turn on what you need.

My other criticism is that of the design. Much to everyone's shock, the Apple Watch Series 7 didn't make a big change to the design of the device and kept that same design that has been used for generations of Apple Watches and didn't move to a more squared-off design more like the iPhone 12 and 13 went for.

Much like my Series 5, Apple Watch Series 7 is one of my favourite devices that I own. Unlike other watches that I have owned, including an Omega Seamaster, I actually make a point of putting it on every day. It not only tells me the time now, but it also controls my smart devices in my house, allows me to monitor websites I manage, allows me to make phone calls, listen to music. And all of this can be done without my iPhone being with me.

I love my Apple Watch.

There's really not much I can fault on this device, and in fact, since it is so similar to the Series 5, I have copied across most of the points I liked and disliked about that over to here. The only criticisms I have, apart from the fact that Apple has left the design the exact same, tended to be more focused on the software running on the device.