Apple unveiled its new iPhones this month, starting with the iPhone XS followed by the iPhone XS Max and the iPhone XR. Once again, I was slightly disappointed with the lack of innovation in these phones. Apple may go on that this model is better than before and that was the best iPhone when it came out over and over, but it's a rhetoric that's not working and slow it has less effect.

This year's iPhones were not much different from last year's, save the fact that we are now presented with a new replacement for the iPhone 8 that somewhat resembles last year's iPhone X. The iPhone XS isn't something special but in this review, I'm going to forget that and tell you how my new daily driver has been for the last three weeks. 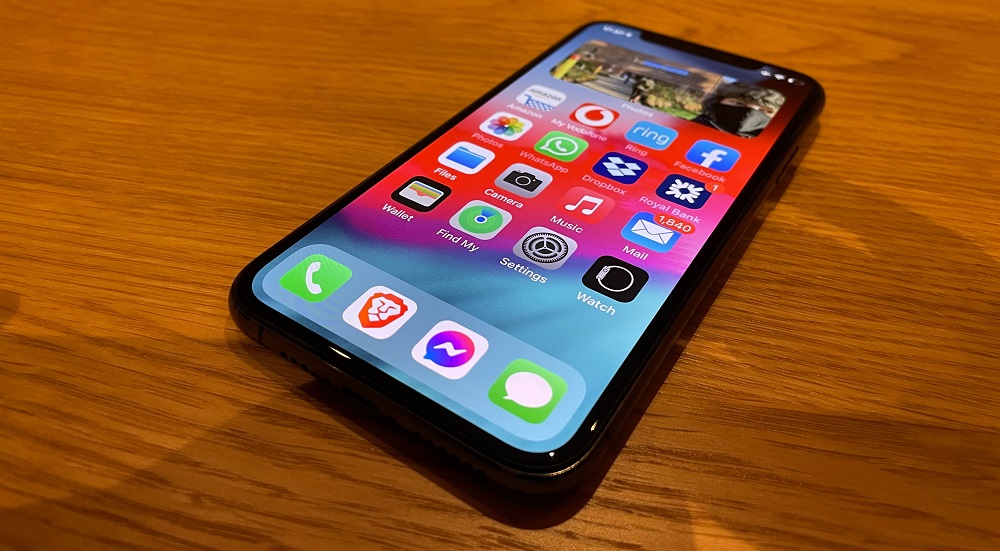 I have for the majority of the time had iPhones and Microsoft phones (Windows Mobile 5 and 6 and then a Windows Phone 7 HTC HD 7 in 2011) ranging from a 3GS (2009) to an iPhone 5 (2012), iPhone 6 (2014) and now an iPhone XS. I wasn't a fan of Apple products until I got my iPhone 3GS in 2009 and then got my first Mac in 2011 (I used Macs last before this in primary school). The iPhone XS that I'm reviewing is my return to iOS from Android (Samsung Galaxy S7) for the first time since 2016. I'm an iPad owner too - so it's fair to say I've got the whole Apple ecosystem (bar the Apple Watch which I couldn't even buy). This is why the change to Android was so painful, but I knew I had to try it out at some point and I loved it at first, but from time to time I realized how much I loved the way everything works together with Apple. So this review may end up slightly biased since I knew that iPhones were the only option for me now, but I'm hoping to keep it as impartial as I can - there are definitely things I don't like about this iPhone.

For the last three or so weeks I've been using an iPhone XS as my main smartphone and I've enjoyed a lot of things. There are also things I've not enjoyed. My main concern with the iPhone XS at the moment is the fragility of the device - as devices get bigger screens and less room around the display, they also gain more surface area for the display and in turn more glass that can shatter. This is a big concern for anyone who has just spent £1,600 on an iPhone XS like me (well I paid just £30 for mine but I pay £58 a month for it, so in total, at the end of my 24-month contract I will have paid a total of £1,600 - making it almost double the price of my second most expensive phone).

One of the things I've enjoyed using is iOS 12. I've always been a sucker to iOS as Android never felt quite as well built - my phone's main purpose is for the occasional information app, email, phone calls, texting, and web browsing (this is a big thing for me as a web developer).

In this article, I will talk about the iPhone XS and how well iOS runs on it.

The design of the XS is very similar to that of the iPhone X of last year. The notch returns, even though in pictures it looks as though it has been abolished, this is Apple's clever marketing using a dark background as it blends with the notch. To tell the truth, the pictures actually don't do the display justice - the notch is barely visible at all when put against a black background (obviously, against a white background the same cannot be said).

Compared with XR the XS has smaller bezels due to its AMOLED, non-LCD display. The XS features a 5.8-inch display using AMOLED technology. AMOLED technology means that each pixel has its own light source. This leads to better contrast ratios and better colour reproduction. Also, the body of the iPhone XS is stainless-steel rather than just pure aluminium, and therefore it won't crack or chip as easily. It's also more soundly built as a result of this change and won't fall apart if dropped. I'm not a huge fan of larger phones and preferred the size of my old iPhone 5 to this form factor but I can certainly enjoy the size of this device, but it's not my favourite.

As smartphones get thinner and thinner, they have to make sacrifices. One of these sacrifices the iPhone XS makes is that once again the camera lens protrudes out of the back of the body of the smartphone similar to how the iPhone 6 looked. I'm not a fan of this and would rather have a slightly chunkier phone as a result (I was like this when laptops started to ditch connections for thinner designs). 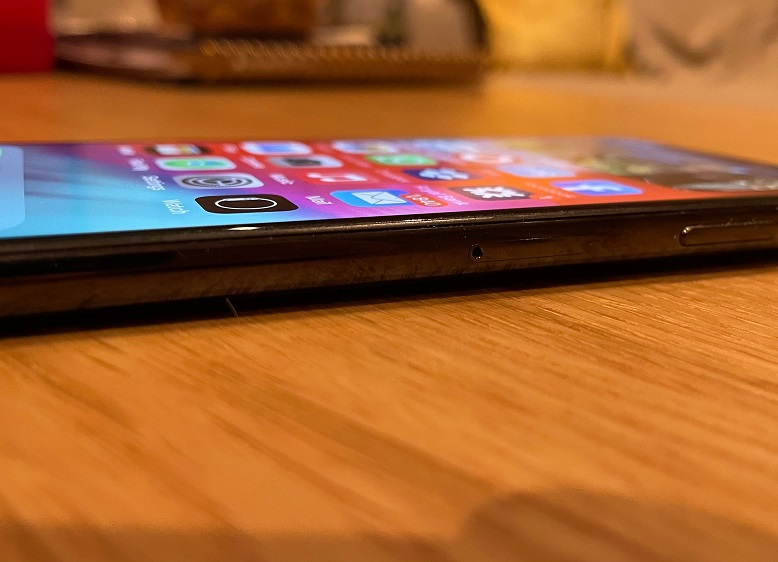 On the right of the iPhone is a curved chrome banner 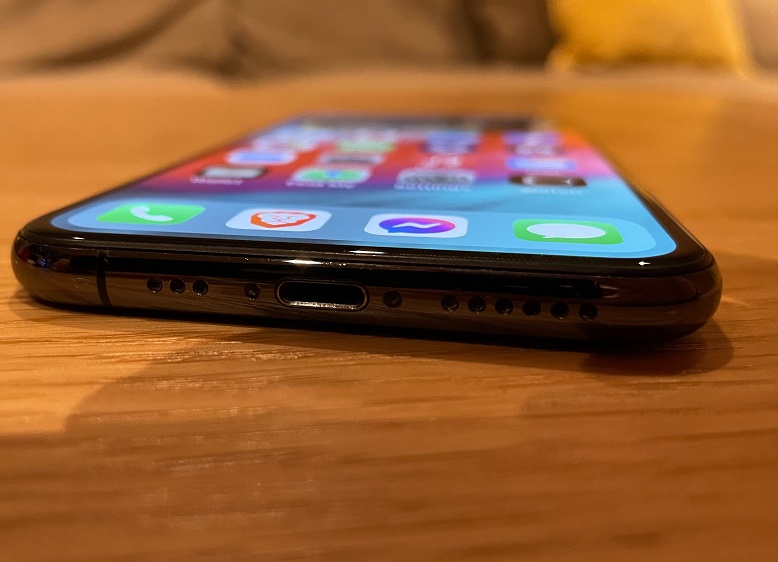 I don't normally benchmark my phone with performance and tend to rely on information from others. But this time I've decided to.

Apple claims the GPU within the A12 Bionic to be up to 50% faster than the A11 it replaces, which means running games on your smartphone will be better than ever. This is an impressive gain.

Furthermore, Apple has brought a few ARM architecture-based instructions that will help with security issues.

The iPhone XS also comes with iOS 12 by default - in the words of Apple (but paraphrased): "the most advanced mobile operating system out there".

The XS also features a Lightning port for charging, but similarly to the iPhone 7, there is no headphone jack. The battery life on the XS has supposedly been improved over the iPhone X, but nonetheless, the iPhone XS still struggles to manage a whole day for me and needs charged every evening.

Finally, iPhone XS also complies with IEC 60529 making it IP68 splash, water, and dust resistant. This means the XS can be immersed in water up to 3m in depth for about 5 minutes.

The XS features a range of different technologies such as WiFi and Bluetooth but also some other technologies that make it more useful. Much like previous iPhones, the XS features Near Field Communication to allow you to make purchases using contactless payment and Apple Pay.

The iPhone XS also features FaceID to log in - gone are the days when you used your fingerprint to log in to your iPhone. FaceID is good on the XS, it's faster than last year's iPhone X and actually offers an even more secure login method.

Just as before, the XS features two 12 megapixel cameras on the rear, one telephoto and the other the wide camera. The telephoto is used for 2x zoomed shots and offers better quality than using digital zoom. The wider camera features 1.4um pixels and a brighter f/1.8 aperture whilst the secondary camera features a smaller sensor with 1um pixels and a dimmer f/2.4 aperture. There is also an LED flash.

The iPhone XS is an amazing phone. It's a fast and high-performance iPhone but still struggles with that battery life issue, despite moving to a more efficient manufacturing process that ultimately should help with this.

The camera on the device is excellent and has some amazing technologies in there.

I love the iPhone XS and although I pay a huge amount for mine, I love things like the AMOLED display, the almost bezel-less design and the amazing camera. But it's let biggest let down for me is the physical size of the device. I wanted a smaller smartphone option, not just a bigger one.

Photos were updated on 5th of December 2020.