Before the iPad was released in 2010, tablets were considered to be tablet PCs. The majority, if not all, tablets prior to the iPad ran on Windows. Apple were the first to make a change that led to the tablets of today.

Whilst I am not much of a believer in tablets, I have to admit there has been one range that I have really liked that stood out from the crowd. That is of course the iPad.

Now call me a fan boy or whatever, but I just feel that Apple build really nice products, and that's a reason to support Apple. And by the way, I'm technically not a fan boy just because I like their products, I wouldn't support them if they chose to make it that your iPhone monitored your heart beat every second of the day and reported it to Apple. With Apple, one of the my favourite things is that everything integrates and works together or as Apple puts it: "it just works". I've had an experience with other tablets such as my Nexus 7 which I have a review of (although it's not on my site at the moment) and I realised it was not the tablet for me.

To put it simply, the Nexus 7 was a cheap tablet that felt cheap and performed cheap. It ran slower and slower as I put more content on it and when it was 50% full it just started to give up. It also ended up not charging to full sometimes, although I cannot figure why.

This article describes the 2013 Nexus 7 having problems as well and this article covers both the 2012 and 2013 Nexus 7 problems. For what I can say (and I'm clearly not the only one, if you read the article), the 2012 was poorly designed and manufactured, that's what keeps it's costs down.

For the rest of this review I am going to look at what's nice and what's not so nice about the iPad Air. 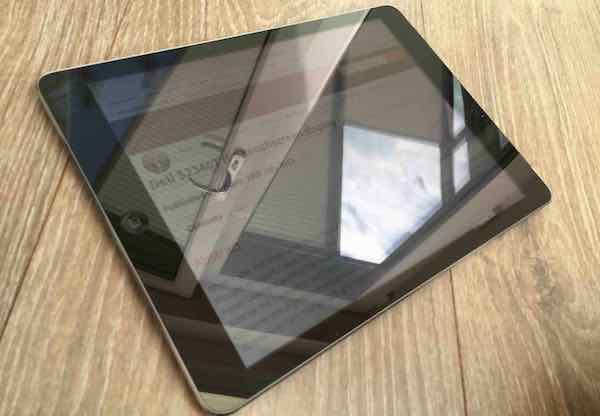 What the iPad is and is not

The iPad has a large 10.1" display and is probably considered a full tablet. It features two buttons on the side (with the Air this has flipped over to the right hand side) for controlling the volume and then a flip switch for muting the iPad altogether. There is a power button on the top of the device (unlike the Nexus 7 which for some reason had the power button on the right).

I chose the 32GB 4G model, the middle model.

The iPad is a tablet for those who are prepared to pay the extra money for something that feels really great. It's like a Aston Martin vs a Mercedes. It's like wow! vs meh. iOS is much less customisable than Android, but if you are like me and just want a tablet to do things like watching videos, working on the occasional piece of work (Keynote, by the way, is fully featured on iPad), browsing the web, listening to music etc and want to have an Apple device for all the excellent features, then the iPad could be for you. If on the other hand, you want to sit and mess about with your device and modify it, go for something like the Samsung range of tablets or the Nexus (although I still do not trust them).

Like almost every Apple product (except maybe the Apple TV), a lot of time goes into the design of the product. It's what I love about Apple products. The iPad is no exception from this. The Air comes (currently) in just two colours; slate and black and silver and white. Both have the exact same feature set.

The iPad Air is available in two colours

The iPad Air compared to the original iPad and iPad 2 is much better designed. In comparison with the first generation, it is slimmer and has a smaller bezel (that's the bit that surrounds the display for those who are less techy) and in comparison with the second generation to fourth there is a much smaller bezel and it's fractionally thinner. See the next two images. 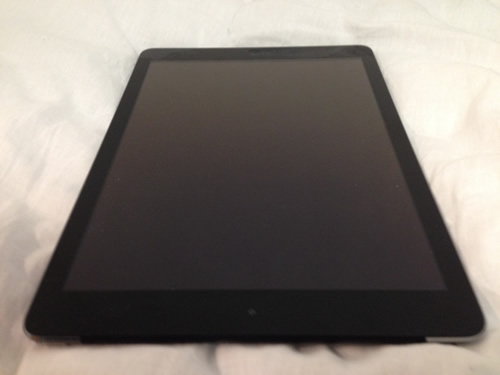 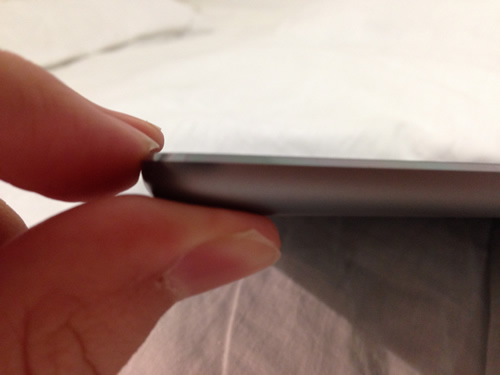 The iPad Air is much more compact than it's predecessor.

The feature set of the iPad is where it is a bit lacking. The majority of decent Android tablets feature so much more. To list a few NFC (Near Field Communication), built in wallets and the ability to use USB-On-The-Go adapters. The latter is something I miss but can live without. The other two features are not something that I particularly care about.

USB-On-The-Go (USB-OTG or simply OTG) is a standard that allows the micro USB port on the bottom to act as a host, allowing devices to be plugged into it instead of it acting as a device to them. This allows the connectivity of keyboards and mice, Xbox 360 controllers (why you would need to do this is something that has always made no sense to me) and USB flash drives among other devices.

The iPad feels very light in your hands. Compared with the Nexus 7 2012 that I owned before, the weight is better distributed and feels much, much more sturdy in your hands. The screen is miles better as well, not only is the colour better, but the Corning glass that these tablets feature is so much nicer on iPad.

One of the current main features of the iPad Air that sets it apart from its competition is the 64-bit architecture that it features. Although the Air only features 1GB of main memory, it is designed to be able to use 64 bit apps properly, meaning bigger data. Also, it really put the shock in to competition, which is probably what Apple aimed for.

Great things about the Air

With my previous tablet, the Nexus 7 and then my previous iPad, I barely ever held it horizontally (widescreen) but with the Air I seem to do that the majority of the time. It just feels right. The Air as mentioned before is incredibly lightweight making widescreen mode very easy to handle. The display is a 4:3 aspect ratio, which seems suited to me, as 16:9 or 16:10 never quite suit the things I like to get up to with my tablet such as Keynote (the only thing I see wrong here is with 1920 by 1080 movies).

Performance on iPad is brilliant. It just runs so smoothly. There are occasional things, such as when you browse the web and the page demands to much on the system where it drops the Safari app and just goes back to the Home screen (this, by the way, is a crash). However, for everything else, there has never been a single crash.

Parallax is an excellent new feature brought to iOS 7. The concept of parallax is that things kind of move. For iPad this is your Home screen background, which moves as you tilt the device around. It gives the user a false sense of the operating system's user interface actually being in the real world, rather than in a computer system. It's nice and it's a good proof of the performance of the iPad. Here are two images where the parallax effect makes a difference to the way the background looks. It's nice, but not entirely necessary. Use the stars to see what I mean. 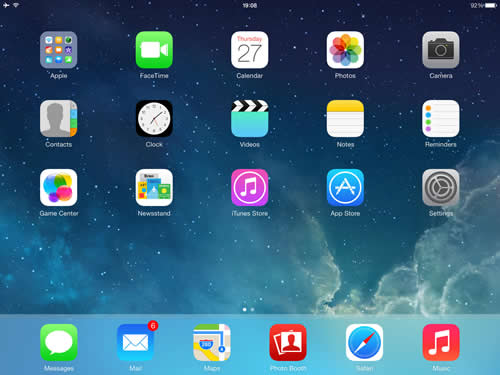 Parallax tends to be a want not a need. 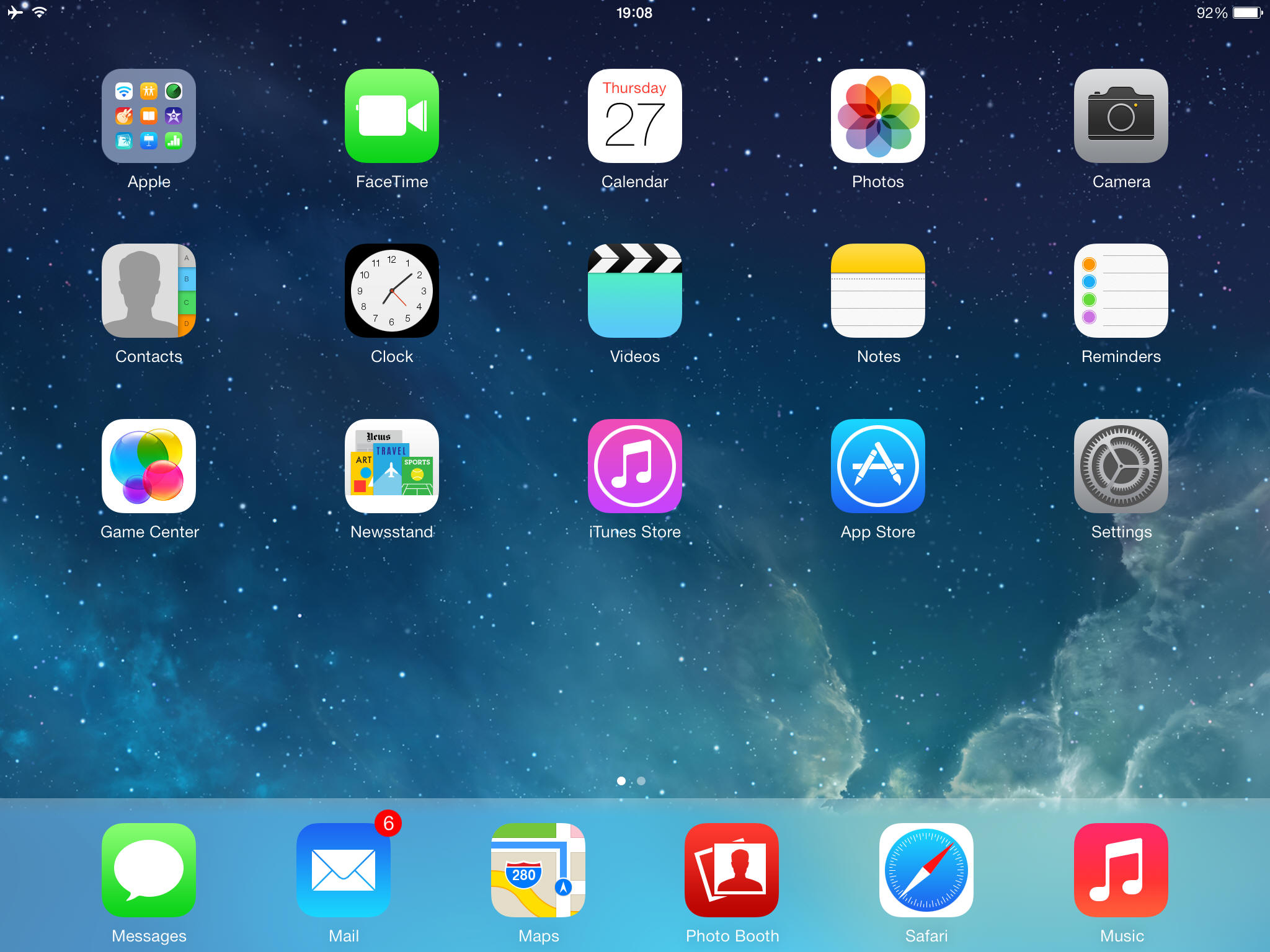 Notice the stars have moved.

iOS 7 is different to iOS 5 that I have on the original iPad in so many ways. Apple have finally decided on some crucial things, but that is not for this article. I will swiftly point out the differences between the way the Notification Center works because it looks much better. In iOS 5 the Notification Center dropped down the middle of the screen only filling the middle about the width of the iPhone. With iOS 7 they chose to make it full screen, a massive change and something that many will like. 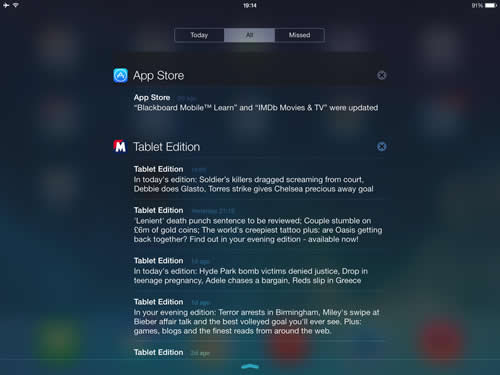 This iOS 7 Notification Center is lovely.

Experiencing the iPad first hand shows how beautiful the display is. No review can tell you how nice it is.

Flaws with the iPad Air

So many people have named the iPad to be the closest tablet to perfection one can possibly imagine, but it still has flaws. One of the biggest disappointments with the current generation of iOS devices is the new Lightning connector, which although is really great, looses compatibility with a lot of it's old iPod based accessories. Shame really.

Another thing that the iPad does not feature to date is NFC or Near Field Communications. It would be good because Passbook is really fantastic, but could work even better with NFC.

The iPad still does not feature the built in Calculator, Compass (and yet the Compass app is so incredibly good on iPhone), Passbook, Stocks, Voice Memos and Weather app found on the iPhone and iPod. Why remains a mystery.

Also mentioned earlier is the fact that *occasionally* the iPad stops displaying a page in Safari. This little bug will likely be fixed within a couple of months. Also, this doesn't seem to affect the iPhone 5 or iPhone 5S (which I have loaded the same scenario on to for testing). You can read more in this Apple Support Community page.

Finally, last year Apple released the iPhone 5S with Touch ID, a finger based encryption mechanism. I'd have loved to have seen that on this year's iPad since it already appears on their iPhone.

I don't think I have ever come across a better tablet than the iPad and the Air holds this. I would not have even bought a Nexus 7 if the Air had been released prior to it (in fact, I did actually say when buying the Nexus 7 it was just a temporary tablet because I knew that soon the bezel was going to shrink on the iPad and at that point I'd buy one).

The Air breaks the trend with everything it does and continues the amazing trend set by the original iPad. It's a very impressive, lightweight, all-day battery life tablet that satisfies every box in the checklist.

The Air is expensive compared with other tablets, but at just £429 it is without a doubt worth the money.

I'd like to point out that although the iPad comes in at a starting price of £429, it's still reasonably cheap. And the Sony Xperia Tablet Z comes in at £359, so it's pretty much a decision between iOS and Android at the end of the day. I say the iPad Air is still the best tablet because of it's design and build quality, as well as the compatibility it gives you with your existing systems, be it Windows or Mac OS X.

If this review has swayed you toward an iPad, I would seriously recommend a 32GB or more, as the Retina display means that apps take up more room than before, so 16GB is not really adequate storage.

However, the iPad still has flaws and unlike a lot of other reviews out there giving it 20 out of 25 stars and more such as Tech Radar I give it the following (based on the exact same analysis they go on):