The iPhone 12 is the 8th tick in the Apple cycle of phones (a tick just generally means that the iPhone is a completely newly designed model compared to the year before) and is a major break away from the design of the iPhone X inspired designs.

This review is focused on the baby model of the 14th generation of iPhone, the iPhone 12 mini. 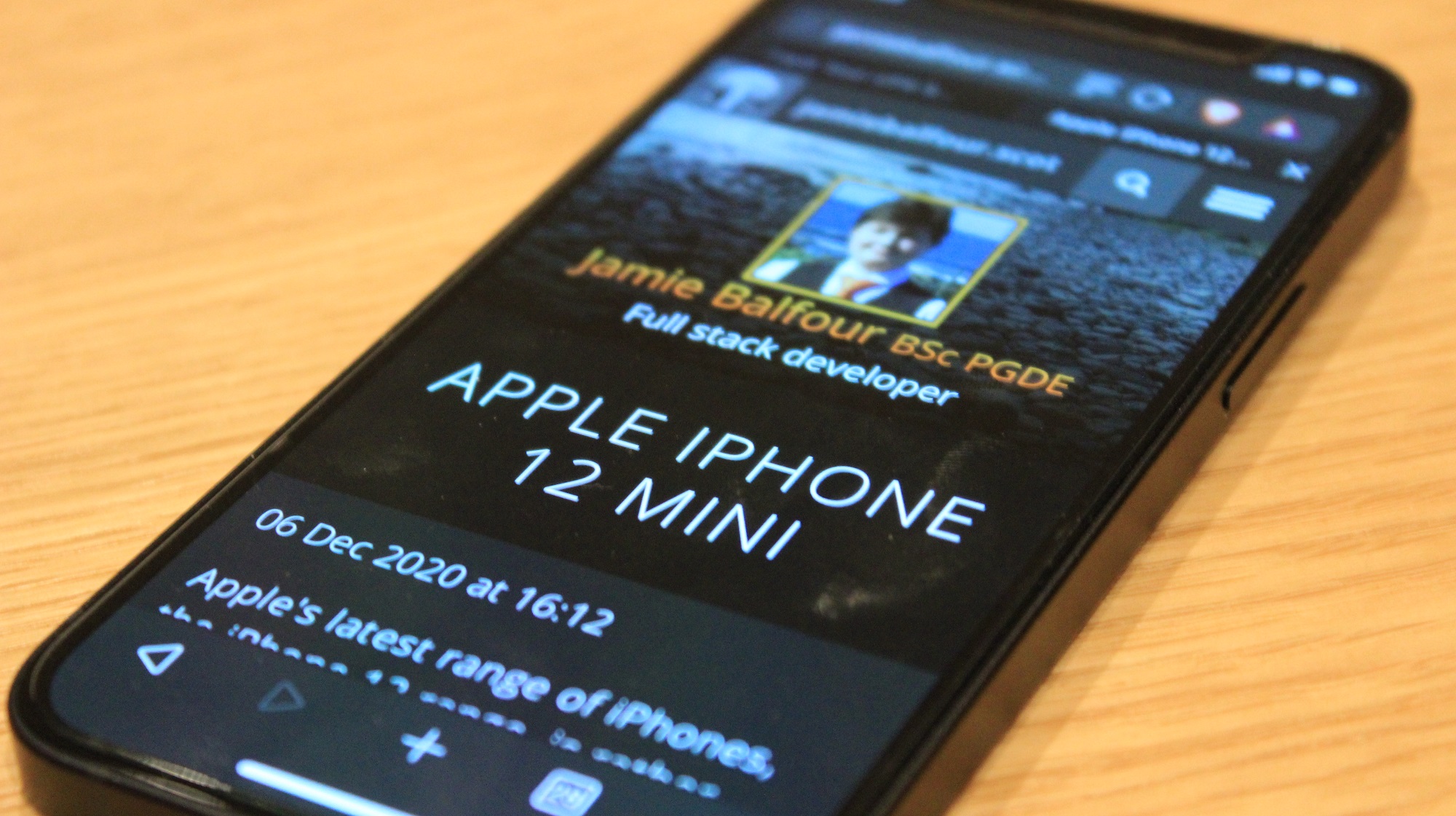 The iPhone 12 mini a small phone compared to the masses of large phones these days, something I've wanted from my iPhone for a while. With a 5.4 inch display (edge to edge) it somewhat resembles my favourite iPhone, the iPhone 5. The iPhone 12 more resembles the form factor of the iPhone 6 or iPhone X/XS which may be better suited to some (I personally was never a major fan of the larger phones). The iPhone 12 mini is actually smaller in physical size than the iPhone SE 2nd generation (picture for comparison) yet still has a larger screen. 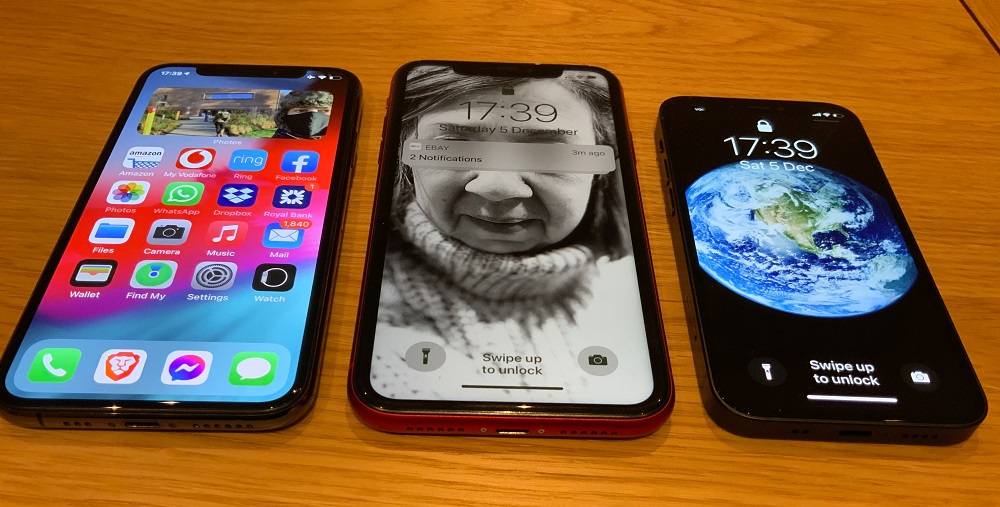 Some users will not enjoy the smaller screen, especially those who are coming from an iPhone XS or iPhone 11 but there are some (like me) who want a smaller phone. The smaller phone acts more like a Swiss knife tool I can pull out at any time whereas the bigger phones were definitely more tricky to remove from my small pockets.

The 'notch' that was introduced with the iPhone X still exists in the iPhone 12 phones but I've personally become used to this and don't mind it.

In terms of weight, the mini comes in at just 133 grams making it one of the lightest smartphones out there. It's also very slim at just 7.4mm. 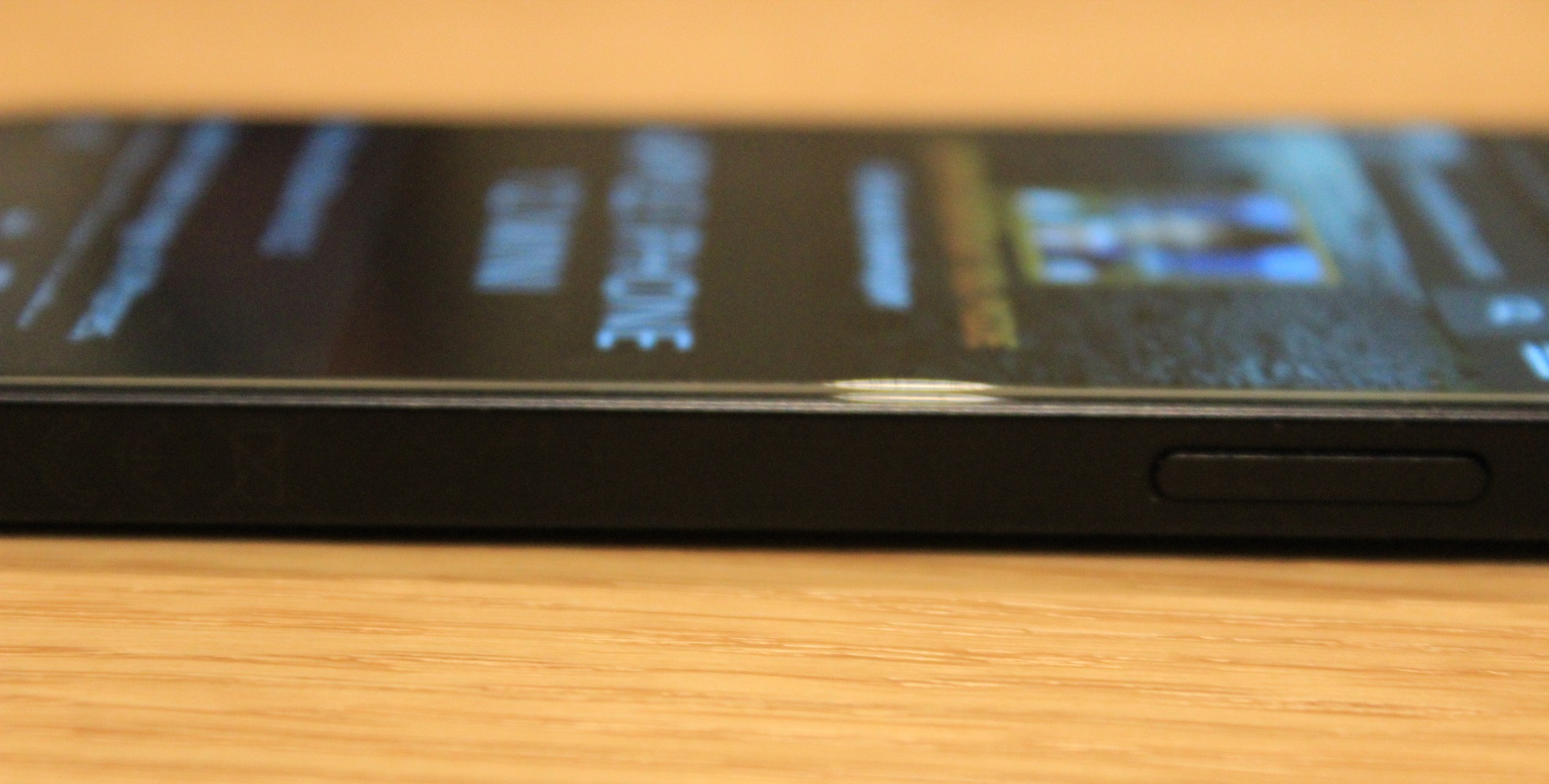 One side effect of making the devices slimmer and slimmer is, as with the iPhone XS, that the camera protrudes out of the casing as shown in the following pictures. This is something I am not a huge fan of. 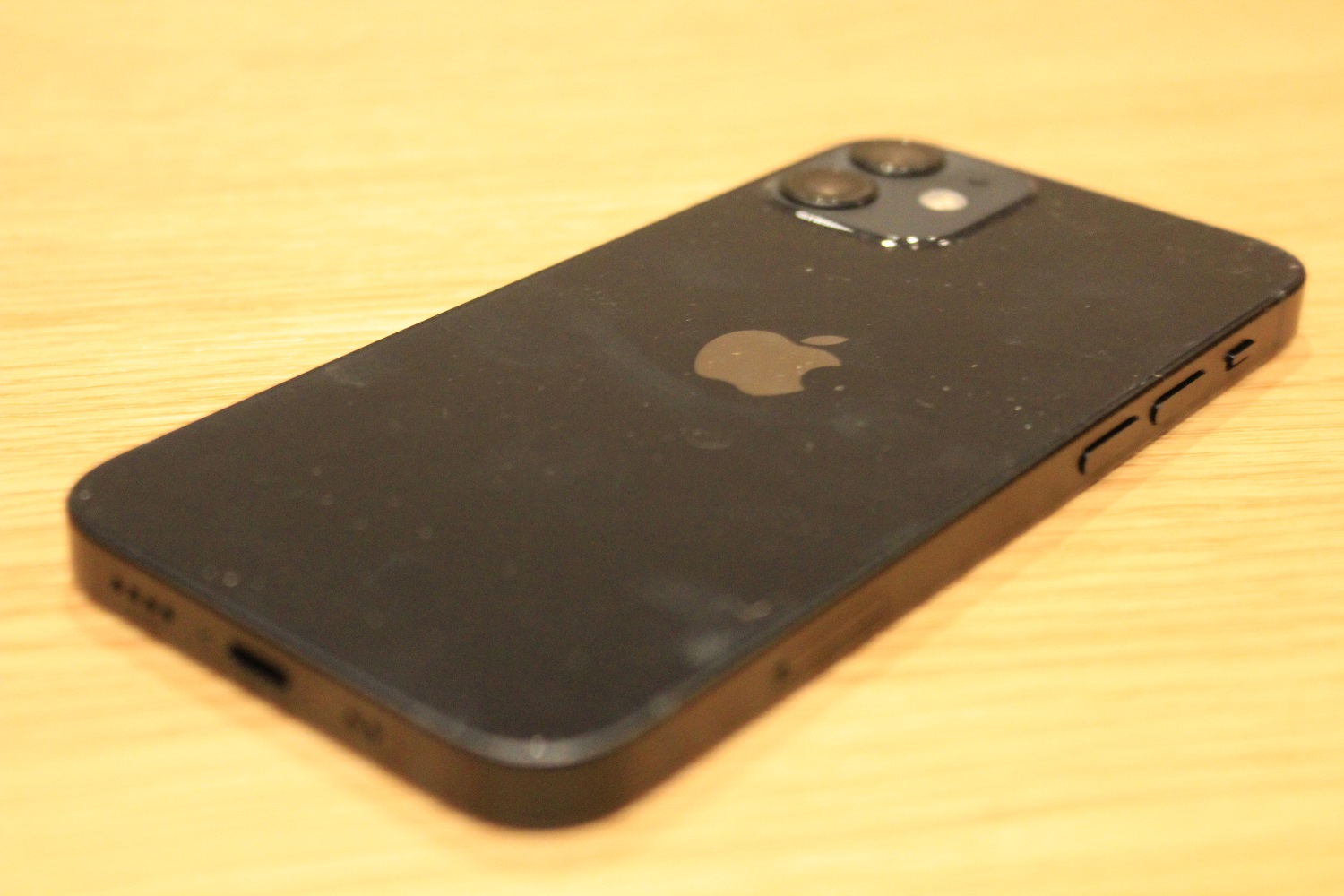 It would be easy to assume that the iPhone 12 mini as being a low-performance incarnation of the iPhone 12 but it's no pushover at all. In fact, the specifications are very similar and the iPhone 12 mini is a powerhouse in a small form factor. Cramming in a powerful Apple A14 Bionic, the iPhone 12 mini is equipped with two 2.99GHz high-performance cores and 4 efficiency cores as well as 4GB of low-power DDR4 memory.  The A14 is manufactured using a 5-nanometre process, making it the first 5nm mass-produced chip. This leads to an improvement in both performance and power consumption and allows Apple to cram in more transistors into the chip than before.

Once again, Apple has opted for the OLED technology for their displays meaning that each pixel contains its own light source which results in deeper contrasts and better colour reproduction. The mini features a display that produces colours accurately and a resolution of 2340 by 1080 that makes the display very clear and sharp at 476 pixels per inch. The display is what Apple brands a True Tone display and supports HDR for better colour production.

The mini also features an Apple-designed 4 core GPU that as always can play the latest smartphone games without any issues.

The iPhone 12 mini also features 5G and is Apple's first iPhone to feature this new technology, which has been claimed to allow for 4 gigabits per second download speeds (actual speeds do vary).  5G is one of the main selling points of this smartphone despite not being fully rolled out across the UK yet.

The 12 mini features Bluetooth 5.0 and WiFi 6 (802.11ax) technologies, and as always Near Field Communication for using Apple Pay. Once again there is no headphone socket on the iPhone 12 but it should be noted Apple has chosen, despite what everyone believed was going to happen, to stick with the Lightning connector instead of moving to the universal, ubiquitous USB Type C.

Apple bundles iOS 14 on the iPhone 12 phones, and once again, Apple claims it is 'the world's most advanced operating system'.

The iPhone 12 phones also comply with IEC 60529 making them IP68 splash, water, and dust resistant. This means the mini can be immersed in water up to 6m in depth for about 30 minutes.

The battery in the mini is rated at 3.85 V 8.57 Wh (or 2,227 mAh) and is smaller than that of the iPhone 12 despite having identical power requirements. This results in the mini having a shorter battery life than the standard iPhone 12, something I'm not hugely impressed by. In fact, on a day-to-day basis the mini only survives for around 8 hours which is far from decent.

The mini is no pushover in terms of features. Much like last year's iPhone 11 and the XS and X before that, the iPhone 12 features FaceID login and does not support TouchID. In a way, I was disappointed to find that Apple had not modified this to work when wearing a facemask considering the current predicament.

Like its predecessors, the iPhone 12 can charge using Qi wireless charging for a maximum of up to 7.5W or using the Lightning connector (which supports fast charging of up to 20W) but also introduces MagSafe wireless charging. The iPhone 12 supports up to 15W of charging when using MagSafe whereas the mini only supports 12W - something that is fully understandable if you know how magnetic induction charging works. 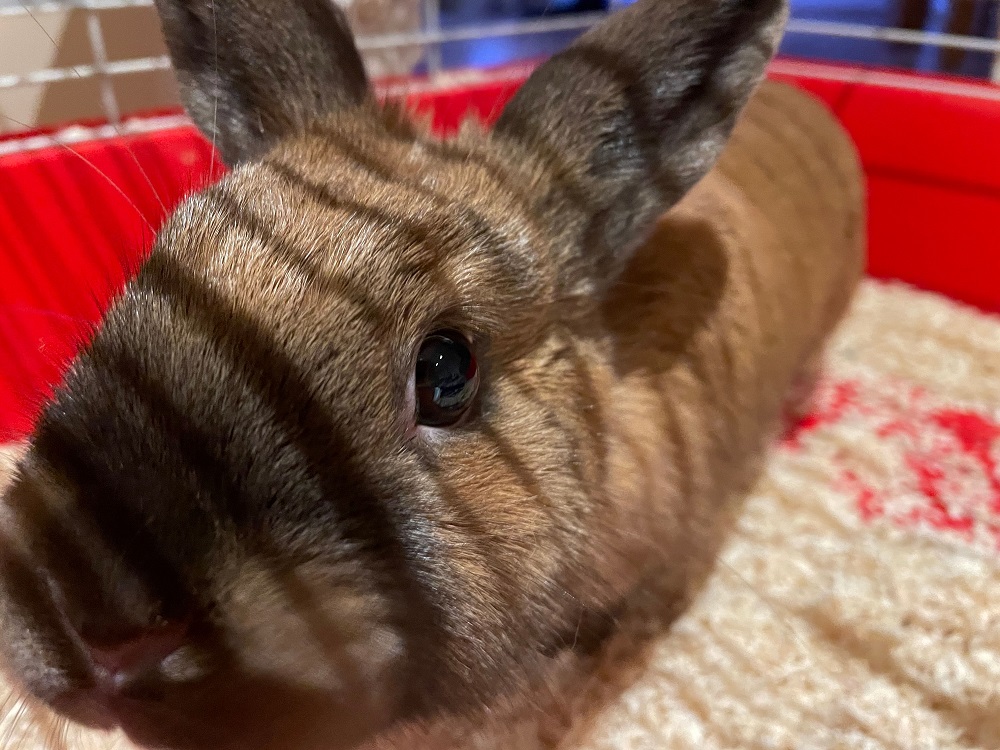 A photo of my rabbit, Charlie, taken on my iPhone 12 mini. Click for the full image

Once again, the iPhone 12 mini features two 12-megapixel cameras that can record video at 4K @ 60 FPS. The Ultra-Wide camera has an Æ’/2.4 aperture and a 120-degree field of view and a Wide camera with Æ’/1.6 aperture. Similar to last year, there is up to 2x optical zoom using these cameras. The front-facing selfie camera is also a 12-megapixel camera that can record at 4K at 60 frames per second or 1080p at up to 120 frames per second.

Colour is very true with the cameras and it even compares to my DSLR in terms of the quality of the image.

Some of the following criticisms come from a comparison with my iPhone XS the iPhone 12 mini aims to replace.

The first is the swiping feeling. On the XS, something I have noticed more now that I have tried the iPhone 12 mini is that the curved bottom of the XS is soft on your finger when you swipe up compared with the mini. This is mainly due to the use of the chrome surround on the XS but also because the surround of the iPhone XS is curved. It's not a huge problem but it less comfortable.

Another issue, speaking of the surround of the iPhone 12 is that Apple has instead chosen to go with an aluminium (I believe) surround compared with the iPhone XS which used a much smoother chrome-like surround. This posses a durability concern in comparison. It does, however, end up considerably lighter as a result of this build choice.

The Amazon app on the iPhone mini doesn't scale up

Due to Apple introducing a new screen size, much like when the introduced the iPhone 5, some apps, including the Amazon app, do not utilise the whole screen space (pictured). This will likely be fixed with time but at the moment is far from satisfactory.

The next is the inclusion of the Lightning connector again. Much like the AirPods Pro which I recently purchased, Apple has chosen to include it's own proprietary connector again, despite a shift to standards on a range of its other device such as the iPad Pro (which I love thanks to the USB Type C connector), Apple has instead chosen to use this dated connector.

As with every other phone I have reviewed, including the Samsung Galaxy S7, this iPhone suffers from poor battery life. Perhaps Apple should ditch the high-performance cores entirely and focus on using entirely efficient cores as a trade-off of performance for battery life?

Sound quality is also noticeably not quite as good on the built-in stereo speakers compared with the larger iPhone XS or iPhone 11 and the sounds come out a bit less like the iPhones we have been used to over the last few years. 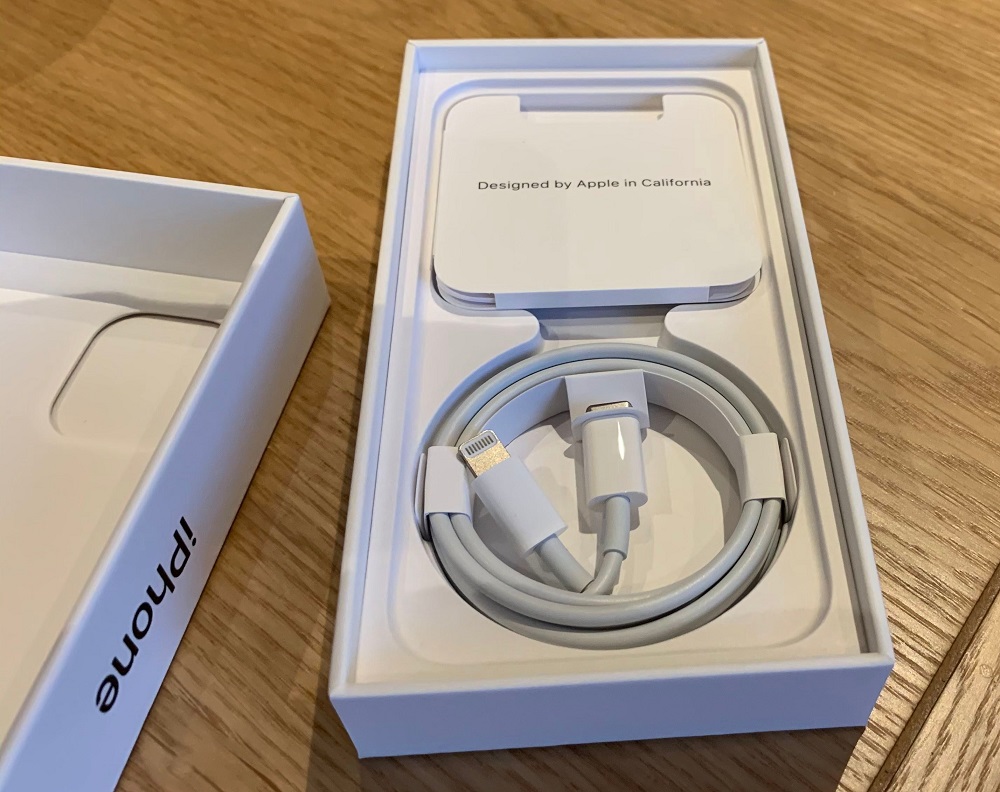 Why did Apple insist on including a USB Type C to Lightning cable and not a Type A?

Apple this year has changed the way that it distributes iPhones, primary citing the environment as the cause for this change. New iPhones no longer include the power transformer blocks they used to provide with every iPhone stating that there are millions of them out there and almost everybody has access to one. They claim that by removing these that there is considerably less waste. Whilst I am inclined to agree and as someone who is concerned about the environmental impact of technology, I do not see any logic in Apple's move to include a USB Type C to Lightning cable in the box rather than a USB Type A to Lightning cable as the majority of their old charging blocks used USB Type A and not Type C.

Further to the removal of the charging block, Apple has called it quits on handing out earphones with their devices, in my personal opinion a very welcome change. The headphones included with the previous generations of iPhones as of recent are known as EarPods and whilst they may have been great, I never used them. They almost always remained in the original box until I sold the device. The other reason this now makes sense is due to the amount of AirPods out there which have all but replaced the original wired earphones.

The iPhone 12 mini is the iPhone I have wanted for a long six or seven years now - at last a phone I can enjoy. You see, I don't enjoy large phones and as I have always said, the iPhone 5 was the perfect size and phone for me.

When Apple launched the iPhone 6 I was excited by the new screen because I felt the iPhone 5 was a bit small at the time, but in hindsight, it was probably just about the right size for me. The other main issue with my iPhone XS was the weight. The bigger phone was much heavier than the phones it replaced including the iPhone 6.

Overall, I'm very impressed with the iPhone 12 mini and happy that Apple has gone down the route of including a smaller phone for those of us who don't want the highest performance we can get in our smartphone but wish to be able to enjoy the majority of the features of the latest smartphones. The mini is the perfect compromise between performance, features and size in my personal opinion and it's one of the best smartphones I have ever owned.