Back in 2003, with the release of Windows XP, we saw Windows change from just being the operating system, to something that contained main different smaller applications. In 2005, the entire XP line-up revamped with the release of Windows XP Tablet PC Edition. Bill Gates officially coined the term "tablet PC" in 2003 when they first started to appear and since then they have come a long way. The initial concept was that they should be slates. They then developed into laptops with touch screens known as convertible tablet PCs or more commonly, convertible notebook computers. The potential within tablet PCs has slowly become so large, that they are now merged with the notebook and are not sub-computers anymore. 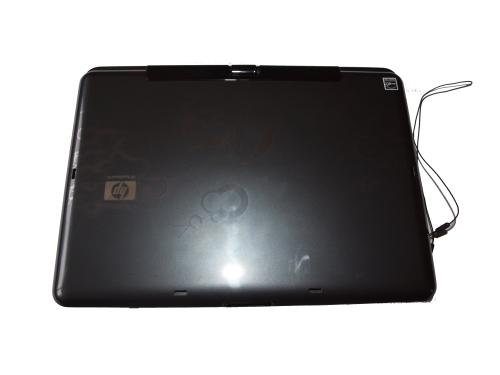 There are other quibbles about the TX2 when compared with the TM2 such as the screen rotation only goes one way whilst on the TM2 it goes both. Another is the CPU, an Intel Core 2 may not outperform the AMD Turion X2, but it certainly makes for better battery life and lower heat.

The specifications of this tablet are as follows: 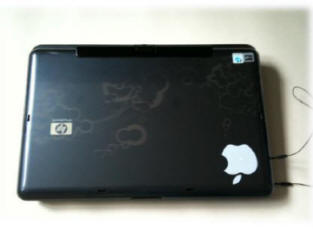 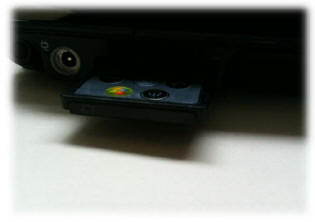 The ExpressCard 34 slot acts as the remote control slot

I have added some extra stickers to my TX2 such as the Wacom and the Apple ones. You can see the lanyard on the right-hand side of the notebook PC. This attaches the digitizer pen to the notebook so that it cannot fall off. Such a device is very useful when you are using it in slate mode due to the fact that you are more than likely to drop the pen.

The interior is just like any ordinary notebook PC. Most people would just think this was a standard notebook from its appearance. At the top left of the notebook, you are given volume control buttons (Down, Mute and Up). The keyboard is the right size for typing on and it is not an island keyboard (some may prefer this). The touchpad is HPs dotty one which I dislike and prefer the style of TM2 but dislike the buttons being built into the pad such as those found on the TM2. When the notebook is flipped into the slate mode, the tablet looks like a gem. It is more attractive whilst in slate mode than any other tablet or notebook out there. Unlike the TX series, the TX2 flips the screen to inverse landscape as opposed to portrait mode when the screen is rotated, although it has a button to change the orientation. Watching a DVD or film on this notebook is brilliant when in slate mode. It serves the convenience of only having a display and no keyboard and mouse but still gives the ability to control the computer. When transformed, the screen only rotates by 180 degrees going clockwise from notebook form. Like most HP notebooks, the front of the notebook houses the audio connectors which include S/PDIF (Sony/Phillips Digital Interconnect Format). Also on the front panel is the infrared connector for the remote control. The digitizer pen (pictured) also features a right-click which is a newer feature on tablet PCs. The pen also has the hover feature which allows the user to see where the cursor is in relation to the pen and allows the use of the hover method of some software out there (for instance Warcraft III allows the user to hover at the side of the screen to move it). 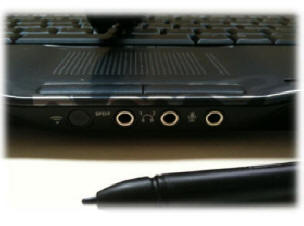 Earlier on whilst I was going on about the differences between the TM2 and TX2 I mentioned the remote control. Well, the remote control is featured in most HP computers and the TX2 is not excluded from this. The remote control fits neatly into an ExpressCard34 slot and allows the user to run the on-demand digital media experience that they require from the buttons provided on the remote. Above the ExpressCard34 is the digital media drive. This allows the transfer of data from SD, MS, MS-Pro, MMC and XD. No CompactFlash there then. The optical drive is situated slightly closer than the ExpressCard34 slot to the user of the notebook. In terms of weight, it weighs 2.0Kg, so it is rather heavy for a tablet PC. It is also rather thick (pictured) but still just thin enough to look stylish and just light enough.

Also worth noting, the display is excellent for watching films and the speakers are placed perfectly to allow the use of them from all possible positions of the display. Even when in slate mode the speakers still face the user. The rear of the notebook is used to house the battery (sadly) and to provide access to two USB2.0 ports and a modem jack. Why I say it is sad that the battery is on the back is that it could provide more space if it was on the bottom, which means more connectivity options. Fujitsu does it and HP used to. We now come to the right-hand side, which has a lanyard and the digitizer. We also find another USB2.0 port and an RJ-45. 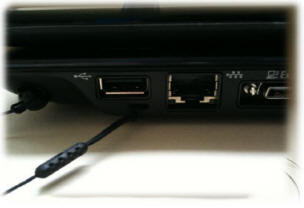 The Ethernet port and the side

The next port found on the right-hand side is the Expansion Port Type 3 which allows the use of an expansion base or docking station. I currently use the XB3000 from my previous laptop with this newer tablet. The TM2 does not feature the expansion port, however. This is in my opinion one reason to choose the more expensive, older TX2 over the newer, cheaper TM2. As mentioned earlier, the bay for the optical drive is a modular one, which means you can remove it and insert a weight saver very easily, or keep the drive-in, although most of the time I have it removed as I use it for university work and mobility is key.

My personal conclusion is that this is a decent little machine that will hopefully perform well for years to come. I'm hoping HP will have addressed all of the issues in previous notebook PCs that I have purchased from them and hope that I can finally have a notebook for more than 2 years without having to send it away under warranty for whatever reason. The notebook wins on style, but unlike the TM2 does not have a metal-based case. It is also a fingerprint and dust magnet, attracting all sorts of smudges and dust particles to its exterior which really does hack me off. The touch screen is great, but about 1cm at each of the four sides of the screen is unusable. Another real problem is with the AMD CPU (as always) being too hot. I'm not sure why HP chose to go with AMD since they've never made good CPUs. Sometimes the tablet is impossible to hold because it is so hot.

The TM2 also features dedicated graphics which boosts performance above the TX2 even though it has a better CPU. I would give this notebook 7/10 for the fact that it has no HDMI/DVI or FireWire/eSATA, limiting its connectivity with anything faster than USB 2.0.