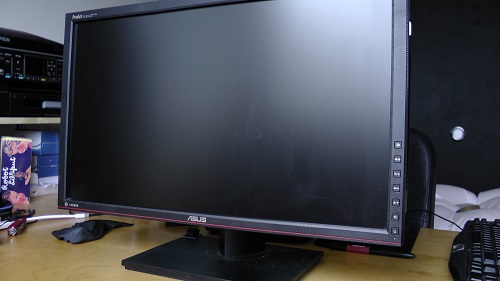 Asus are a company who manufacture a variety of different technological items. They make motherboards for the computer enthusiast market (although I like Gigabyte boards better), computers for the everyday user (in particular laptops), tablets, netbooks and more. One of the other products not mentioned here that they build is LCD monitors. One of these monitors is the PA238q 23" IPS display. This monitor was first available at the end of 2011 and it has since become a very popular choice of monitor for professionals, gamers and general users. This review is going to take a look at the features of the monitor and why it is becoming so popular.

Out of the box, the Asus PA238Q is not going for an attractive design (although this is an odd way to go based on the fact it is a pro-art monitor). 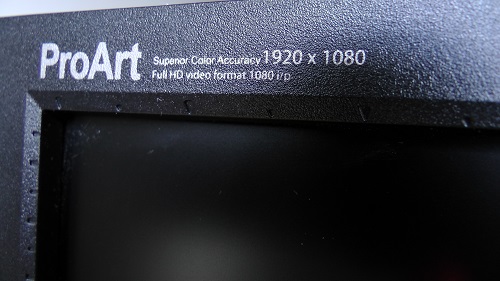 Why make a ProArt monitor not so arty?

The red strip down the bottom of the display is about the only design feature about it. It has a matte screen and a square black rim made of non-glossy plastic. There is no glass sheet over it and it looks more function orientated than design orientated. The back of the monitor also has the metal to keep the monitor cool exposed around the rear connections which again makes it look slightly ugly.

Generally, the design of the monitor is not the key focus with this monitor. It is odd that a monitor aimed at graphics enthusiasts and artistic people would look so functional and non-stylish.

In terms of use, the monitor has a great design for all of the features such as rotation and it is a very sturdy stand. Unlike the Dell P2310h it does not feature a built in cable management system.

The PA238q is an interesting monitor. It is similar to a monitor I had previously by Dell which went under the product name of P2310h but with a few major improvements. Firstly, the display is IPS (in plane switching), unlike the TN (twisted nematic) display of the Dell. This means that the colours on the display are more vivid (even matching Adobe's sRGB or super RGB) and that the display can be seen from 178 degrees on all sides. This is great because in a similar fashion to the older Dell model, it can also pivot, swivel and rotate. This means that the panel can be converted from being a widescreen to a "tallscreen", allowing for the resolution to go from 16:9 to 9:16. This is great from when you are reading something on the internet or something that is becoming more commonplace, multi monitor setups where there are three portrait monitors making one larger widescreen display. 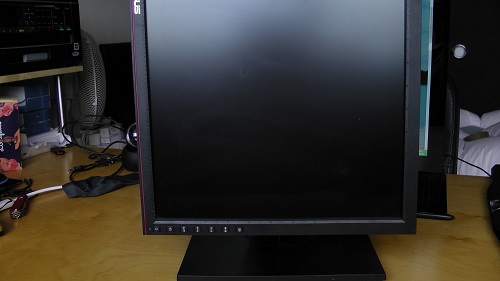 The display rotates nicely and is still viewable when rotated

Asus provides the factory settings sheet when you purchase the monitor in the box as part of the whole concept of making the monitor as perfect as possible, so that you can see where it sits in the colour ratings.

The monitor is also moderately power efficient, using a maximum of 65 watts -- which although looks to be on the CRT range of power usage, is good for an IPS display. I'm more than aware that it uses a considerable amount for an LED backlit monitor, which this monitor is also. It is not simply a monitor though, as it acts as a USB hub (which I find brilliant, more later). And so this also bring the power consumption up quite considerably. So if you are very energy concious (I am by the way) think about whether you need this monitor or not, because TN monitors offer lower power consumption than IPS.

Connectivity on the PA238q is not scarce either. The Dell P2310h featured a really good choice of connectors which could barely be beaten for flexibility offering VGA (Video Graphics Array), DVI-D (Digital Visual Interface in digital mode) and DisplayPort. The fact that it offers DisplayPort puts it above the rest of the monitors without. I always used DVI simply because I do not need sound through the monitor and because I feel that it is a sturdy connector like VGA. 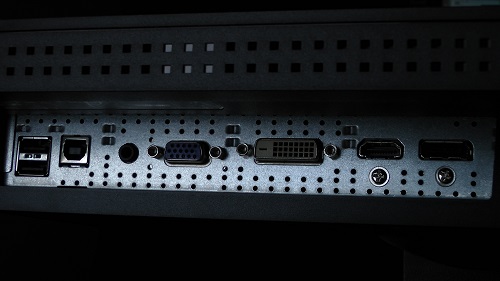 The Asus PA238Q features the most popular modern and old connectors

The PA238q however, features just one up on it - HDMI (High Definition Multimedia Interface). It also has an option for audio out which the Dell did not have. Some DisplayPort connectors also support audio but the Dell did not and the Asus does. This audio out connector allows for audio which is streamed through HDMI or DisplayPort to be sent downstream to a set of speakers or headphones. This can be useful if you plug a PS3 or Xbox 360 into the monitor as I occasionally do. However, there is no option for built in speakers, and although most will prefer audio out, I personally (and I am sure others do) prefer the idea of a monitor that does it all without external speakers and so on.

It also features an integrated USB hub with four USB 2.0 ports (although there is a possible USB 3.0 version to be released in the future).

The monitor also features a really good selection of other options. As mentioned earlier, the stand permits the rotation of the display so it is quite easy to setup a 3260 x 1920 setup on your desk with three of these monitors in portrait if that is what you would like. But it also means that you can do what I did for a few months and have a dual setup with one monitor in portrait and the other in landscape and simply extend the desktop - great when you are programming.

The monitor features an S button on the side which is used to demonstrate how the screen will fit on to a piece of paper for instance, giving life-like sizes. 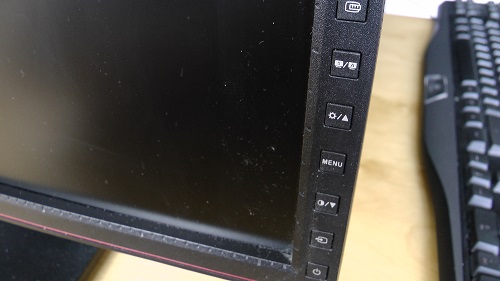 The markup feature is probably very useful to some

This feature is a mark-up for determining what size something on the monitor looks compared to say, an A4 sheet of paper, as it has a ruler function built in. I haven't really used this feature, but it is there if that is something you do like.

Mentioned earlier was the IPS display which is LED backlit. The display also has a maximum resolution of 1920x1080. The maximum refresh rate at this resolution is 60 times a second or 60Hz. This is a bit of a let down on such a good display, but it is absolutely fine if most of the time you are not playing any games. Even still, IPS displays have never been designed for games, hence the Asus name for the series that this monitor belongs to, ProArt Series.

I also mentioned that I use the USB hub for something "brilliant". I have a Logitech Illuminated Keyboard and a Logitech G500 mouse, both of which I love and love to use with any computer. They both connect through the monitor to my main system, except, there is a USB switch in between. One way it goes straight to my desktop computer and another it goes to a loose cable on my desk. This means that when I need to work on something on one of my laptops or netbooks they can easily have the keyboard and mouse transferred to them along with the HDMI or DisplayPort cable giving them a video connector.

Sure it's not as perfect as an Apple Thunderbolt Display for the MacBook Pro or DisplayLink but it offers support for all of the devices. The monitor offers four USB 2.0 ports with two on the back and two on the left hand side. This is similar to the Dell P2310h. One thing I'd have liked to have seen is USB 3.0 which is now appearing more and more.

It lacks built in speakers unfortunately. It would have been a good option to have had them built in so that when playing on a games console, the user did not have to provide a set of speakers also. As well as this it lacks a cable management system. I can't wait for monitors which have all of the connectors on the base, whilst still offering the flexibility of this monitor. It also lacks an integrated webcam that a similar HP monitor once offered me (HP W2448hc). A lot of monitors offer webcams these days because of video chat. It makes sense to include one.

Finally, the monitor is not exactly attractive which seriously lets it down. Style is important with a monitor these days in my opinion.

It is difficult to fault this monitor, other than the appearance. Something else which I would have liked to have seen in this monitor however, is the inclusion of basic integrated speakers. This would be ideal for those of us who do use the HDMI port for something such as the PS3, so we do not have to connect a set of speakers every time we want to play it.

To conclude, I feel that Asus has built a really high quality monitor, but it lacks speakers and has not got the stunning look or a stylish design.