Back in late 2011 Apple released their new range of MacBook Pros and I bought my first Mac computer (although we had a family iMac late 2009 in the house). I bought the lowest end MacBook Pro - the 13" Intel Core i5 2.3GHz 4GB RAM and the 320GB hard disk drive. I got a great deal on it getting it for just £850. I immediately installed Windows onto it after doing the same with our iMac. It took me time to properly love Mac OS X and by mid 2012 I was saying how I liked it but it never could become my favourite operating system.

After a year using OS X however, I began to like it more than Windows. One of the things that was lovely was the fact that it integrated with the iOS devices such as the iPhone, iPod or iPad. I got myself an iPod Touch next and had everything synchronised between it and my MacBook Pro. I really loved this feature. In October 2012, I got an iPhone and back into touch with iOS technologies (and ditched the Windows Phone). The next thing I did was to get myself an iPad Air and get rid of my Nexus 7 (2012 edition). This move was one that I had been planning since the day I got my Nexus 7, but it was more of a temporary solution until Apple chose to reduce the bezel around the iPad - which they did with the Air.

My next Apple product would indeed be the MacBook Pro with Retina display. My previous 2011 MacBook Pro had been replaced, even though it had years left in it. The simple reason for that was that when I purchased my MacBook Pro in 2011, I was unsure how much I would like it. Think of it more as a demo or trial computer. This meant that I could try out the MacBook Pro and see what I thought without spending a lot of money. When I considered a new MacBook at the start of 2014 due to the fact I wanted a larger display and a more powerful MacBook Pro, I kept telling myself to be content with my MacBook. But then my brother kept saying that he was going to buy one. We came to an agreement and I gave him my MacBook Pro and I got a new model (I sold it for £650 making a whopping 76% back from it, proof that Macs do retain their value for a lot longer than PCs, as this was just less than the value a second hand max-out MacBook Pro on eBay). 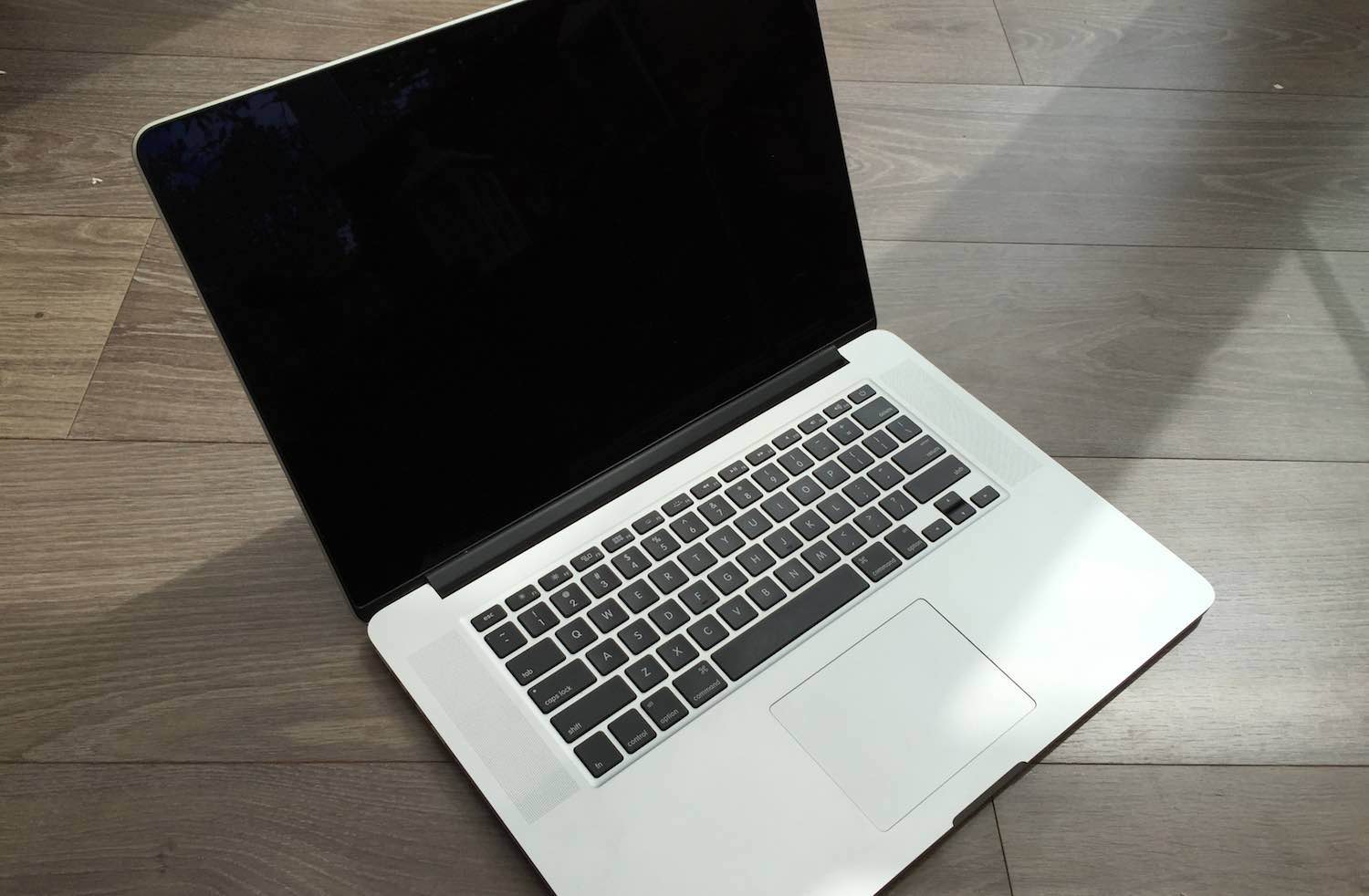 What the MacBook Pro with Retina display is

The MacBook Pro screen sizes were in the range of 13", 15" and 17". In 2012, Apple ditched the 17" MacBook Pro and released two new models that would soon become the only MacBook Pros - the MacBook Pro with Retina display available in both 13" and 15".

The MacBook Pro with Retina Display in this review is one of the high end 15" models. This model features a 2.3GHz Intel Core i7, 16GB 1.6GHz DDR3 RAM, a 500GB (512GB as a matter of fact) solid state drive, Intel Iris 5200 Pro graphics combined with the Nvidia GT 750M discrete GPU with 2GB of VRAM. It has no optical drive.

Although I am not normally a fan of Nvidia, I don't mind on this occasion.

The Nvidia card is medium range card that is quite capable of running a few decent games including Starcraft 2 and Diablo 3 (the two games I am particularly interested in myself).

The system also features USB 3.0, which my previous MacBook Pro did not feature, although this has been the norm since the 2012 Ivy Bridge release.

To most this will be the key selling point of the MacBook Pro with Retina display. To some this will just be an extra added feature.

The following picture shows the amazing quality and scaling capabilities of the display and it's resolution. 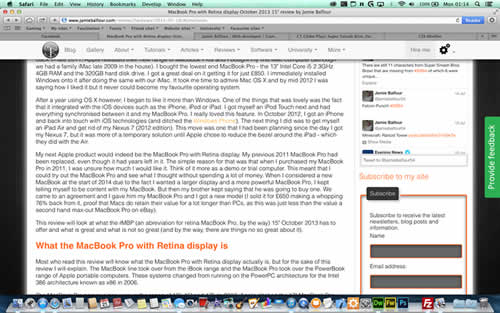 Whilst the specifications are incredibly high, the high resolution means that some games run slightly slower, especially when it is running at the optimal native resolution. 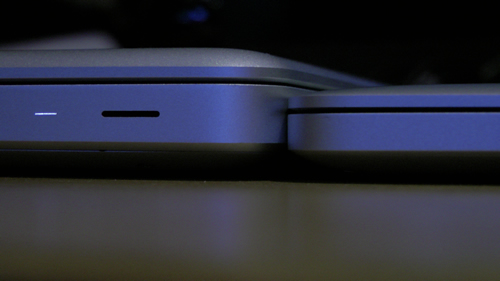 A comparison between my two MacBook Pros shows how much thinner the MacBook Pro with Retina display is.

The keyboard is slightly nicer to type on than compared with the older generation MacBook Pro range on this model. It still features one of the best keyboards you can get out there. It's still illuminated and does not seem to have changed much apart from the fact that there is no longer the DVD eject button but a power button instead sitting next to F12.

The display has got slightly thinner with the new models, which seemed a feat in the first place, but it has been achieved. It's also become the first IPS (in-plane switching, I may do an article on the differences between display technologies at a later stage) display giving it a 178° viewing angle. 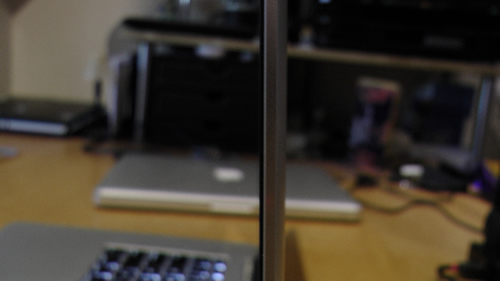 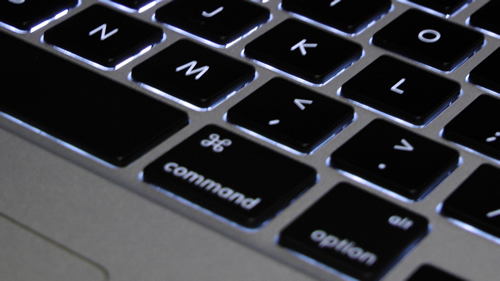 The illuminated keyboard is still as beautiful as ever.

The design of the MacBook Pro with Retina Display, which obviously is going for a minimalistic design means there are features missing in comparison to the previous MacBook Pros.

Some features are ones that I feel are huge (not just big) losses.

For me, the loss of the IR (infrared) port on the front of the MacBook Pro with Retina display which was used in conjunction with the Apple Remote Control pictured, is a huge loss. 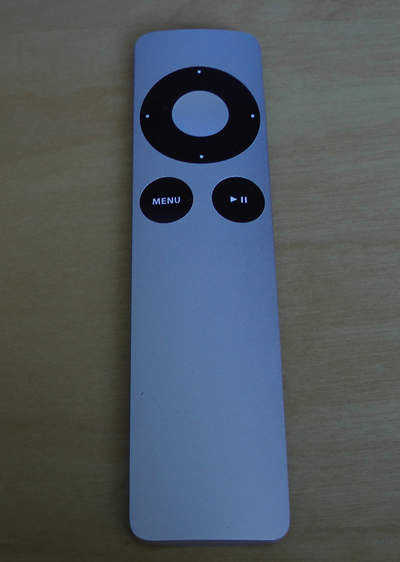 The lack of infrared port means no Apple Remote support.

The computer also loses the FireWire and Ethernet connectors that the standard MacBook Pros both had, but it gains an extra Thunderbolt (it is actually a Thunderbolt 2 connector, meaning it maxes out 20Gbps instead of just 10Gbps). Apple has created adapters to convert Thunderbolt to either the FireWire 800 or Ethernet connector allowing a bit of backward compatibility. The reason for their removal is down to the fact that both connectors pretty much defined the height of the previous MacBook Pro ranges and as time went on both began to lose their significance.

In total this MacBook Pro has two Thunderbolt 2 connectors, which is a very nice addition, but apparently, it does not support three displays through the 2 Thunberbolt 2 connectors and HDMI connector paired as the system gets too hot.

It features USB 3.0 which is a nice step up from my previous MacBook Pro (although the 2012 15" models also had this). The USB 3.0 ports are found with one on each side (that's a nice touch).

It is also the first mobile Mac (as the Mac Mini was the first Mac) to feature HDMI.

There is the standard audio jack provided on Macs that allows an iPhone headset to control volume, go to next track, go back a track and pause/play music as well as supporting a microphone input at the same time. If you need both for whatever reason, you can split the connection using a splitter cable or buy an external soundcard (this is something I used to do before when I did not use desktop computers for every day work, particularly the Creative Live 24-bit External Card).

Finally, the MacBook Pro also has a standard SD card slot on the right hand side, which permits the reading of the most common type of memory card and is great if you need to take photos off the camera on the move. 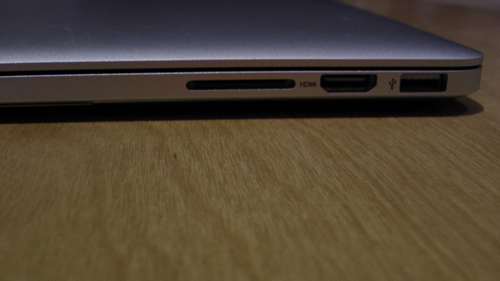 The HDMI port is a very nice feature, so you will no longer have to remember a Thunderbolt/mini DisplayPort to HDMI adapter 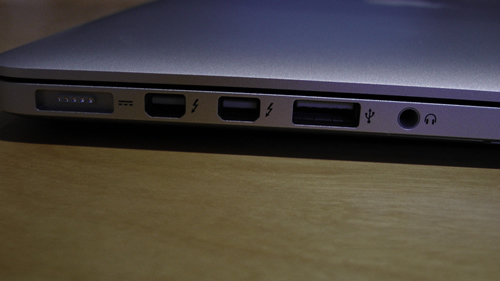 The two Thunderbolt 2 connectors offer speeds of up to 20Gbps - four times that of USB 3.0.

I don't really have much time to assess the performance of the MacBook Pro with Retina display because of the situation, explained at the end.

The MacBook Pro being tested runs the Resident Evil 5 benchmark well achieving some 60 frames per second. This was tested on Windows 7. It plays Starcraft 2 at high settings without any issues.

The SSD helps to make the speed when starting OS X fast, and the same goes for Windows 7, but, and this is a big statement, my MacBook Pro 2011 with it's basic specifications (although has 16GB of RAM and a SATA 6Gbps SSD) starts up marginally faster. This is a hugely shocking result.

The speakers in the MacBook Pro with Retina Display are absolutely the best I've ever owned on a portable computer.

You may have read on the internet in other places that the MacBook Pro with Retina is a very closed system. This means that barely anything can actually be changed. The RAM is soldered to the motherboard and the battery is soldered (or perhaps just glued) to the top of the case. Neither of these are user serviceable. The SSD is a proprietary one, meaning it will be either a) hard to find or b) very expensive to replace.

This is totally the opposite with the previous range of MacBook Pros.

The MacBook Pro with Retina display is so high resolution that a BootCamp Windows 7 is pretty much impossible to use - Windows 7 just does not have the scaling qualities Mac OS X has. This means that Windows 8.1 (not Windows 8.0 even) is the only real option for those wanting to install Windows as well as OS X on their MacBook Pro with Retina display. Click to see the full resolution. 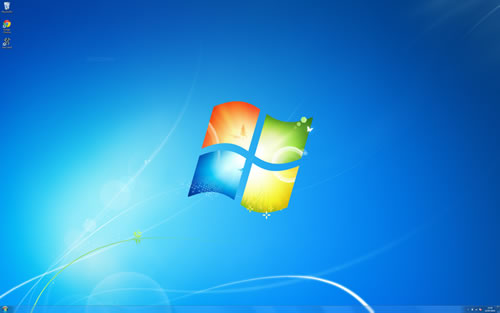 It's very sad for me to say, especially as someone who loves almost everything by Apple, but I have some quibbles with the MacBook Pro with Retina.

I am much a fan of the previous design and the ability to change the solid state drive and RAM and the missing IR port is a crucial point of upset for me. However, the specifications of this model and the beautiful display are reasons for perhaps making me feel it's time to move on and accept the fact Apple are not going to make MacBook Pros like the previous generation ever again.

I have considered returning it and swapping for an older model, but why? Well this explains why most customers, me included, would even think about getting an older model:

...given the choice, many customers will continue to get the standard MacBook Pro because of the combination of low price, more storage capacity and internal optical drive.

As well as this, I dislike the lack of replaceable parts, particularly the battery, which will be a costly replacement when the time comes.

I have decided to stick, because it's time to move on. Apple are not going back and neither am I. The MacBook Pro with Retina display is a marvelous machine and I know it, but I just do not think it's the Mac for me.
Posted by jamiebalfour04 in Technology
apple
macbook pro
retina
mac os x
yosemite
mavericks
nvidia
i7
ssd
Comments
Powered by DASH 2.0 (beta)
News
ZPE 1.10.12
ZPE 1.10.12 (Zippy Zebra) is now available to download. The last release of the year brings a few important changes.