I've always had a good sound system for my TV since I got my Samsung C750 TV back in 2010 since the sound built into the TV was only adequate for my liking. Back in 2010, my setup included a full kit with five satellite speakers and a woofer. It was a good system and still is. But since moving into my own home in March, there was a bit of an issue with trying to get the two rear speakers in the right locations without making a mess of the room (I do not want to have cables all over the place).

I wouldn't normally be bothered too much by the idea of a soundbar - I thought they were quite gimmicky and probably wouldn't last, but it appears I was quite wrong about this since now full kitted home theatre systems from Samsung have all but disappeared and soundbars are the norm.

Making the choice of buying a soundbar as a replacement for an amazing sound system like my previous Samsung HT-D5500 was going to be tough, and I knew this. However, I didn't know I'd be paying so much more for this.

In this review, I'm discussing the Samsung HW-Q900T Soundbar. 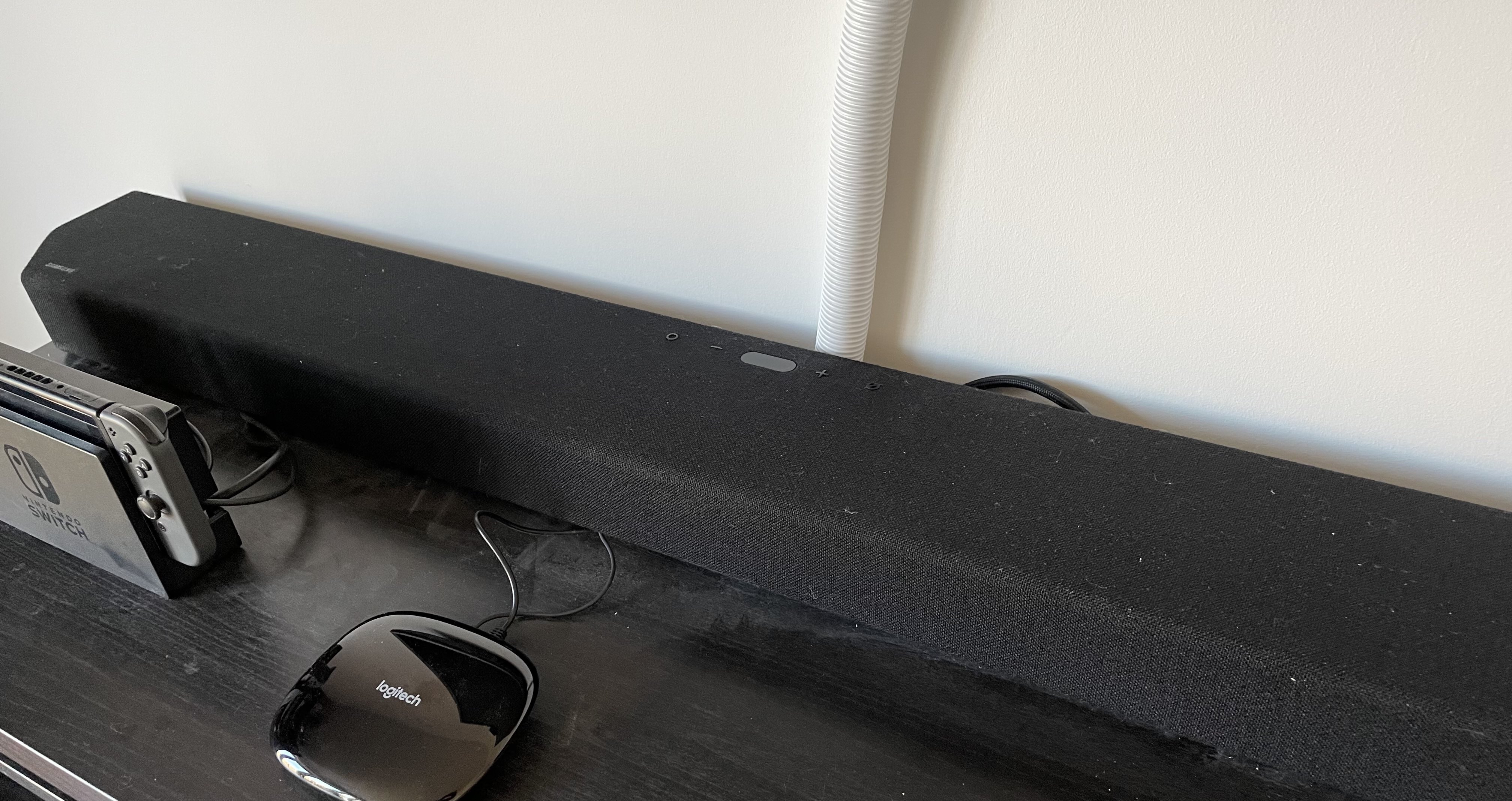 The HW-Q900T is a soundbar that can be either positioned below the display on a unit or wall mounted underneath the display using the provided wall mounting kit. It's predominately black with a slightly squared look to it. It's got a speaker-style fabric design to it.

The system features a separate subwoofer, which I was impressed to see is now wireless, meaning you can place it anywhere in the room. The subwoofer features a right-facing port which is like the soundbar itself, fabric. 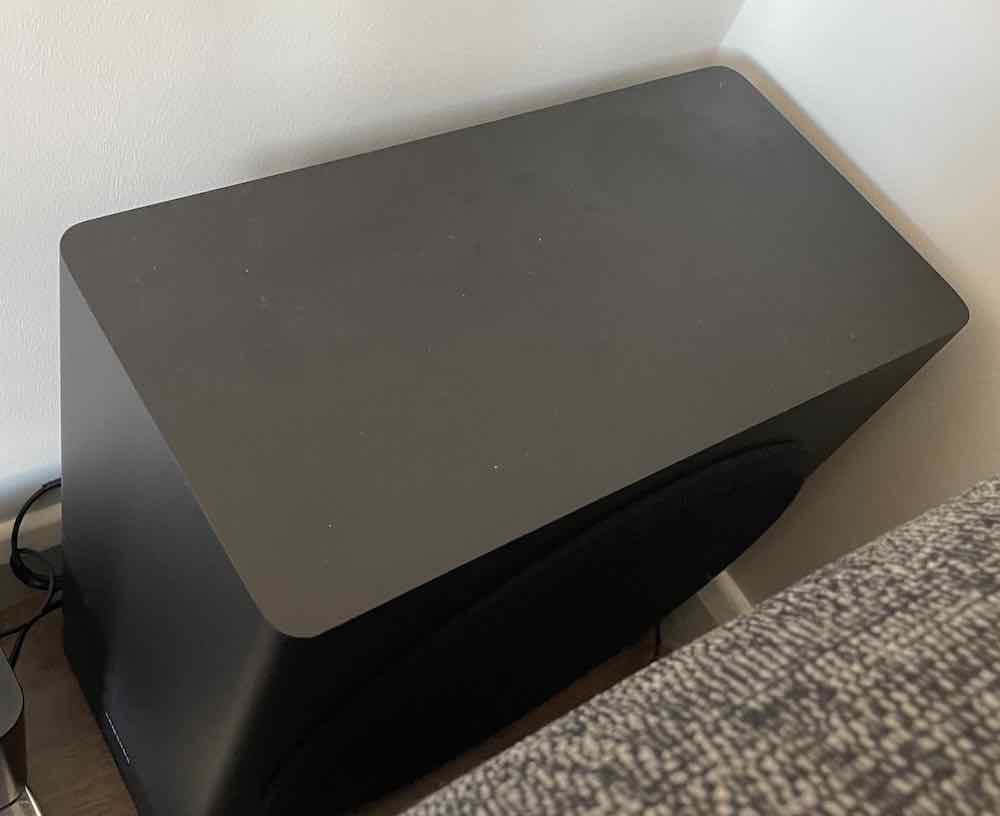 The subwoofer is quite large, but it's also wireless so it's easy to position

The system is referred to as a 7.1.2 system in that it features 7 drivers inside the main soundbar that produce high-frequency audio and a single subwoofer that produces low-frequency audio and the two at the end informs us that it has two ceiling speakers. The two ceiling speakers are again built-in to the main soundbar unit but use clever technology to ensure that they bounce from the ceiling downwards. 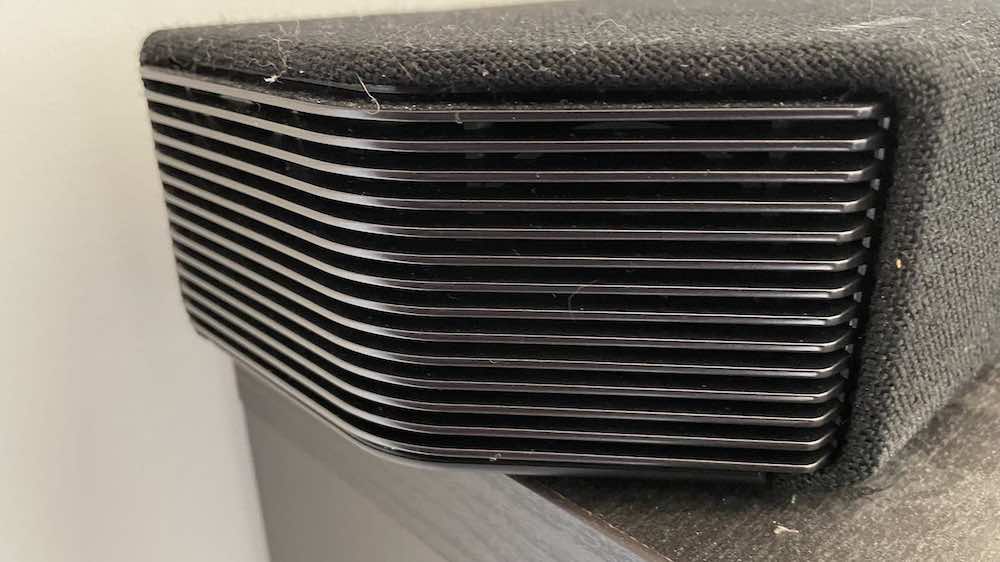 The left side of the soundbar 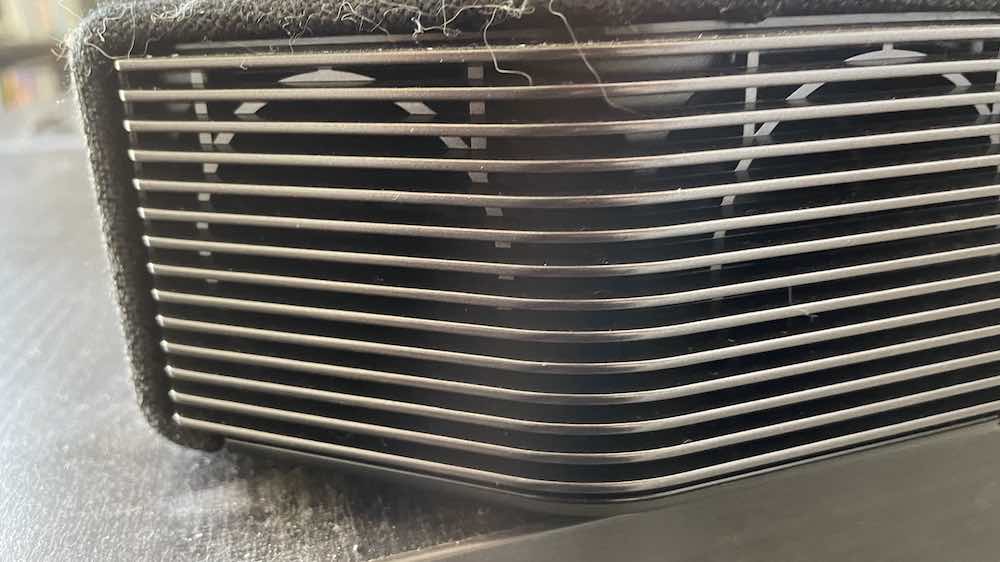 The right side of the soundbar

The Q900T supports Dolby Atmos and Dolby DTS:X and it boasts a whopping 406 Watts of power. It does this through a practical and compact design that allows people like me can benefit from the lack of rear speakers. The subwoofer featured with this design is quite large, coming in with an eight-inch driver that deploys very strong basses (so strong my neighbours have told me they can hear it).

In terms of connectivity, much like what it replaces (my Samsung HW-D5500 speaker system) the soundbar features two HDMI-input ports, one optical audio input and a single HDMI output. There are no USB ports for plugging in things like a USB drive with music on it and the only USB port featured on the system is for servicing the device only. The Q900T also supports HDMI eARC (Enhanced Audio Return Channel) The Q900T also features both WiFi and Bluetooth offering the ability to use WiFi as a backup when the HDMI connection fails between the TV and soundbar. This is a really good option but it seems its purpose shouldn't be for what I am experiencing and it shouldn't really be dropping from HDMI over to WiFi constantly. Bluetooth is a very useful feature that easily allows you to play music from your smartphone with little hassle. And with Samsung phones, you can simply tap the top of the soundbar to start playing music from it. 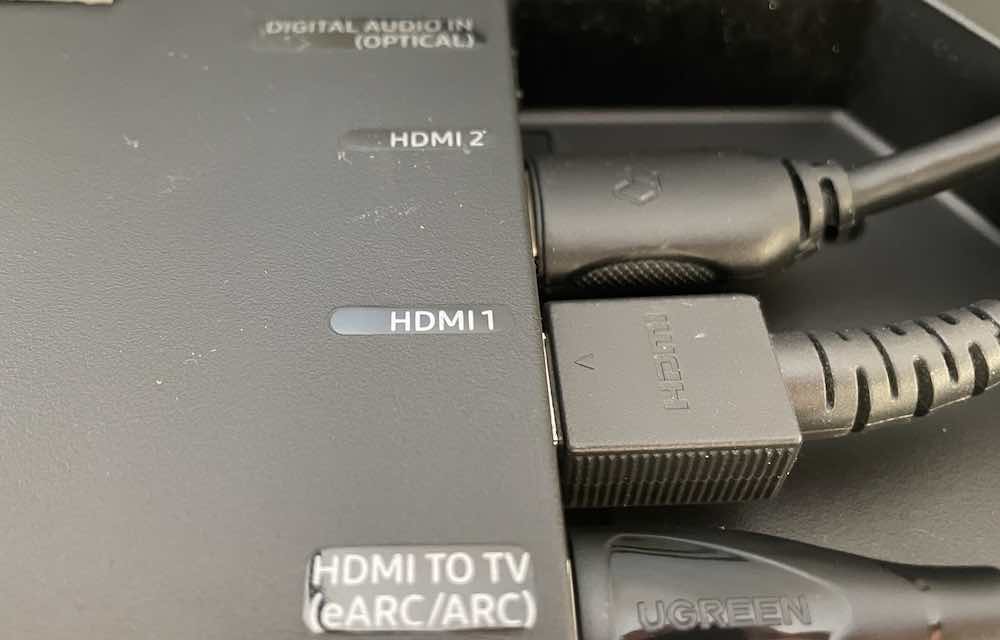 For me, the two HDMI ports on this are perfect.

Much like many of Samsung's other products, the Q900T features Samsung SmartThings connectivity which is one of the main reasons for me selecting this model over their competitor's models. SmartThings allows this device to be controlled by the smartphone app as well, as since I have added my SmartThings to my Amazon account, Alexa. The Q900T does, however, omit an RJ45 Ethernet port for wired Ethernet, which is a bit disappointing.

Speaking of Alexa, the Q900T also features built-in Alexa, which allowed me to move my Echo Dot 3rd Generation from my living room away to another room. The Alexa features built-in to the soundbar are really handy, however, limited. There are certain things you cannot do with this soundbar coupled with Alexa, for example, I cannot make calls like I can from my other devices. It's a big shame that.

Alexa is actually a big pain in this device and it seems to respond to almost every word that sounds remotely like her name, for example, I said 'that's a nice animation' and she responded. This also means muting or lowering the volume of the source and it's very annoying.

The Q900T also features Spotify integration, again really handy, but I would have liked to have seen Apple Music instead of Spotify personally.

Finally, the Q900T features Samsung's Q-Symphony feature which allows a Q-Symphony enabled television to synchronise with the Q900T to get the most out of the sound system.

The design of the Q900T is great, it's built with a fabric known (at least from a quick Google Search) as Kvadrat fabric.

The soundbar itself weighs around 7.8kg, and measures around 123.2cm by 6.95cm by 13.8cm making it quite large and heavy. I have quite a large media unit below my TV which contains my games consoles and the like, but the soundbar actually doesn't sit perfectly on the unit and comes off slightly at the edges. Whilst a lot of users will likely wall mount the Q900T soundbar, some of us will not.

The subwoofer weighs about 9.8kg, which shouldn't be a problem since the subwoofer would remain on the floor anyway. As I mentioned earlier, the subwoofer is quite large too, coming in at 21.0cm by 40.3cm by 40.3cm. I have found the placement of the subwoofer to be quite easy due to the fact that the subwoofer connects wirelessly to the main soundbar unit - a very welcome change from my previous speaker system.

As mentioned prior, the Q900T does not feature rear speakers, but it is possible to purchase them separately if needed.

Here's my biggest criticism of the Q900T however. And that criticism is of the display. On the top of the soundbar, you will find the display that shows which input you are currently on. This is really important for those times when you are trying to set it up to something different from just playing sound from the TV (since the TV will set the soundbar to the correct input for you). For example, trying to switch to the two in-built HDMIs is as easy as clicking the function button until you get to the correct HDMI port input on the soundbar, but it's made difficult by the fact that the display that shows which input you are on is found on the top of the soundbar, not on the front (which ultimately would face me when I'm sitting in front of my TV). This means whenever I need to change the input and need to see what input I am currently on, I need to get up and go over to the soundbar. This is hardly convenient and I would have expected Samsung to have just gone down the route of putting the display on the front of the soundbar rather than the top. 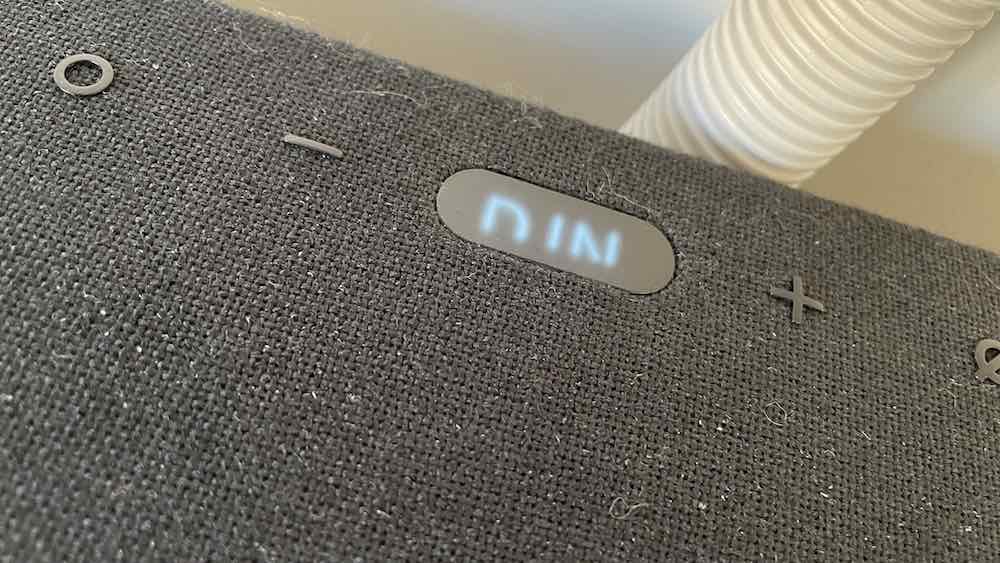 The display is featured on the top rather than the front of the soundbar.

In terms of the design, the Q900T sits nicely with any modern setup and is all black with a hint of grey around the sides of the soundbar (pictured). Everyone who has seen this soundbar has complemented its appearance stating that it fits nicely into my modern home.

The Q900T is a stunningly good piece of engineering. From the amazing sound quality to the perfection in design, the thoughtfulness of the wireless subwoofer and the amazing connectivity, the Q900T does not disappoint, that is, if your budget can stretch that far. At just over £800 (although I got it on sale), the Q900T is an expensive purchase. I had to have a big think before spending that on something that ultimately will not get used every day.

There are things that are really impressive about this soundbar, such as, and perhaps the most important thing, the quality of sound produced. Another thing I love about the Q900T is the dual HDMI inputs that some of the cheaper models do not feature at all. Have Alexa built into this device is also a real plus for me.