Let's not beat about the bush here, Microsoft's attempts at making their webmail client actually decent have never really worked. Many of my readers will know that my faith in Microsoft was tested as I became a Mac and Linux user for the first real time in 2011. My Windows Phone and Windows 8 experience made me fall entirely to the dark side of the operating system world. I became a sole Mac and Linux user in 2013. I became more in touch again with my Microsoft side in 2015 when Windows 10 was released. But one product I've always swore by that Microsoft has produced soundly is what was formerly known as Hotmail, even though I've never felt like it was developed the way it should have been. I've always rejected claims that Googlemail is better and that the future of webmail is with Google. In this article I revisit the history of Hotmail, my history of Hotmail and how it came to be the product it is today. I then look at what Outlook looks like in it's latest update and whether or not I will be staying with this as my primary email account.

Firstly, Hotmail was not Microsoft's own product. Back in 1997 Microsoft bought it.

Through the years since Microsoftâ€™s acquisition of Hotmail in 1997, their free to use web based email client has changed more times than I can even remember. In fact, looking back at all the major updates to it reminds me of different periods of my life. For this introduction I've actually needed to source information from Wikipedia, but that doesnâ€™t mean I donâ€™t remember anything of these events, because I do and as a long standing Hotmail user who dreaded going to his webmail, I remember them well.

I'm a long standing 'Hotmail user' since my Hotmail account was created on the 27th of January 2004, so I guess it was only some 7 years old at the point when I created it. Back then it was simply called Hotmail and within a few years changed to MSN Hotmail.

During this time, MSN Hotmail focused on a lot of things in one - news and mail being the more dominant features. I was a user of the MSN Messenger application of the time (that feels a lifetime ago!) and would login every night when I finished school. This was a great tool that allowed me to keep in touch with my friends as well as providing access to notifications of emails at all times. Hotmail itself was pretty standard for the times, but it was free and feature rich.

In 2004, Google launched it's Gmail service, which is now Microsoft's largest competitor in webmail. I stuck with Hotmail through this time but in early 2006 when I became really into browsing the web (and got involved with using websites such as StupidVideos.com and eventually YouTube.com too) I decided to create a Gmail account (amongst others including my own Amazon and eBay accounts). It was during this time that Google began the accession to be the powerful company it is today. Gmail was fast and lightweight compared with Hotmail, albeit not as attractive and feature rich as it was at the time. So after making the difficult decision of whether to leave Hotmail for Gmail, I stuck with my Hotmail account. Microsoft continued to add new features to Hotmail including one that I really took advantage of - multiple email account domains (I loved the idea of having all the aliases of my email address like @hotmail.com and @hotmail.co.uk,  and one for each year I've had it, although you did have to sign out and in to use a different email address and couldn't link them together).

In 2005, I got my first smartphone (yes, I know, I was definitely the first person in my school to get a smartphone, but I guess that comes with the job of being the geek, you know?). Obtaining my first smartphone which ran of course on Windows Mobile meant that I could receive emails on my phone. Since it ran on Windows Mobile, integrating Hotmail with my phone was easy. Gmail on the other hand was not. This lead to me ditching my Gmail account in favour of my Hotmail account.

In 2007, Microsoft released the next update to their service with the launch of the 'Windows Live' brand. It was at this point I began to feel that Hotmail went a bit downhill. I say this because the webmail system became cluttered, and full of graphical and feature-based errors. For a short while, whilst in it's early stages, it was known as Windows Live Mail but due to many complaints Microsoft re-added the word Hotmail so it became known as Windows Live Hotmail. In 2008, Windows Live Hotmail received a major update that made it faster, moved the ads from the top to the right hand side, adding themes and many more features. Microsoft added a few really useful features at this point including integrated Windows Live Messenger (as it was known at the time) and things like email rules were much easier to use. Microsoft's Bing became integrated into Hotmail in 2009.

In 2010, Microsoft released 'Wave 4', an update which brought a new design, which focused on a lightweight design than itâ€™s predecessor, integrated SkyDrive and my favourite feature to ever come to Hotmail, the Sweeping rules. Folders were easier to use because of this update too. In addition, the calendars and contacts sections were improved. But as time went on, I felt that Windows Live Hotmail became far too cluttered and became incredibly slow. Itâ€™s design was very poor compared with Gmail at the time.

Microsoft's dropping of the Windows Live and the Hotmail brands in someways upset me. Hotmail was something that had been around for a long time and itâ€™s disappearance was hard for me to accept. However, the name Outlook makes absolute sense and itâ€™s by far Microsoft's best name for this set of web client and tools to date.

In July 2012, Microsoft made Outlook available to the public. This new version meant many new things - first of all the updated the streamlined user interface. The new UI meant that you could get things done much quicker - menus were redesigned and the interface became much more lightweight. All of this really did improve the service altogether and as someone who has experienced this service from the beginning I feel that Microsoft made it the way it should be with the launch of Outlook.

Integration with the newly acquired Skype meant that you could message using the Skype interface built in (this replaced Windows Live Messenger overall and in the Outlook.com web interface). This was a really useful update for those places where it is not possible to install Skype. 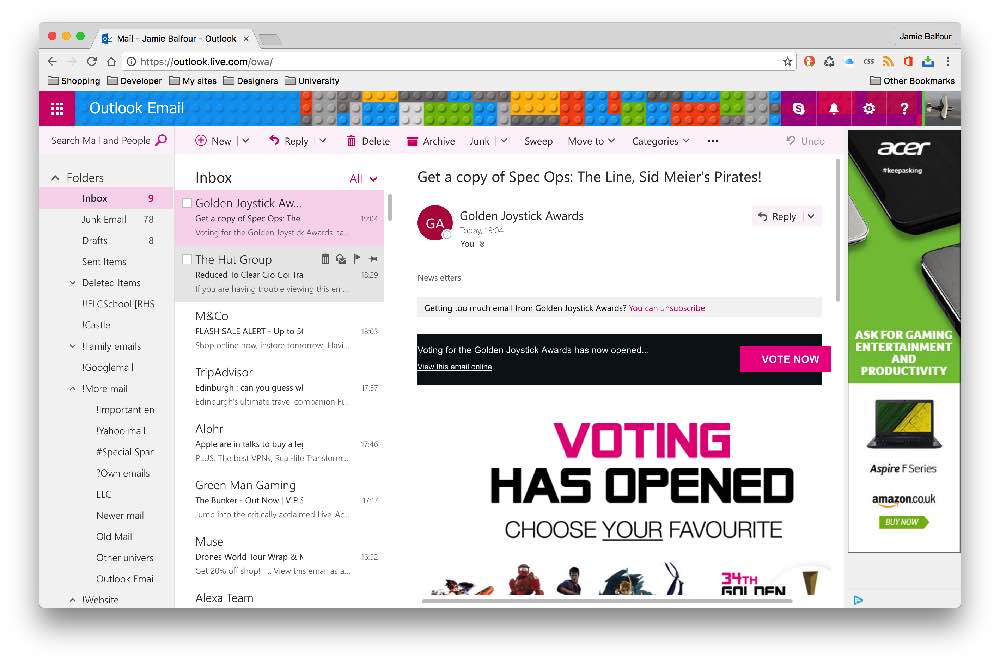 Outlook in 2016 is fairly to the point with it's features

I'm not going to even put a 'however' in this paragraph when I say that Microsoft has finally done it with Outlook in 2016. The new interface is streamlined, attractive and just what you need to get done with your email. I was a huge fan of using an email client instead of a webmail based system until Microsoft updated Outlook in 2016 because I couldnâ€™t bare all the problems it had both graphically and with it's performance. Until now this has always been the case, but very recently I've become the fan of Outlook I used to be of MSN Hotmail some twelve years ago. So hereâ€™s why Iâ€™ve finally gone back to webmail with Outlook:

Not only is Outlook one of the most used products that I have, but I can finally say it is one of the best ones I use.

Microsoft has really done it. They've got the right mix of layout, colour schemes, desktop-friendliness and mobile friendliness, tools, options, flexibility, customisation and integration. Everything about Outlook has been well thought out. I'm now able to boast very wholeheartedly that Outlook is the best email system on the web compared with having to admit I do not use the webmail at all because the email system for my primary email address was a mess!

Well done Microsoft, you really should be proud of the great job youâ€™ve made here!