For the last five or so years, I've had a business server and a home server. My business server works for the Jambour Digital team but when I finish for the day I tend to relax to a film or whatever. I've had a Network Attached Storage device for around 10 years now that has served me very well for this purpose but it's not seen much use over the last few years since I've set up my home server as a replacement for DLNA streaming over IP.

My home server acts as my VoIP SIP trunk PBX as well as this, so it's doing quite a bit. Further to this, I use it to occasionally back up files from my PC. I also host a small website on it too, called ZEN (zen.jamiebalfour.scot) but recently took it down to perform some maintenance. And now on top of that, I've been looking to use it to download backups from my business server once a week. We'll see how that goes.

So really, my home server does a lot of things, not to mention being my SSH portal into my home to allow me to transfer files on the go etc.

Recently, I built a system that stores the states of my smart home devices around my house. The system is powered by ZPE/YASS and Velocity. It basically is triggered by IFTTT to change the state and then sends a command back to IFTTT to change the device state. It's pretty awesome.

But then I started to think that since I own everything Apple (iPhone, iPad, MacBook Pro, Apple Watch) wouldn't it be awesome if I could integrate all of this with the Apple Home app on my iPhone?

Well, thanks to Homebridge (which by the way I have been using for a while now) I'm adding another thing into the mix. It is important to note that setting up Homebridge is quite easy but possibly not for those less familiar with running installers and perhaps those less savvy with Linux. I'd recommend having a Linux-powered home server that you can leave running 24/7 for this project.

Homebridge is, in case you didn't know, an awesome (and free) tool to link your smart home devices to Apple's HomeKit even if they do not support it. For example, I own a bunch of Meross smart devices ranging from light bulbs to switches and light switches as well as a Tuya smart blind controller. It's not only rather tedious having multiple apps to control these devices but it's also not possible to get an app for each of them on my Apple Watch and on my Amazon Alexa devices.

So here's the fix. Samsung's SmartThings - one of the smartest smart home hubs out there. I've owned it since about 2018 and it's had mixed uses, sometimes being used a lot and then other times not seeing much use at all but recently I revamped its setup and restarted.

The following diagram shows how this works. 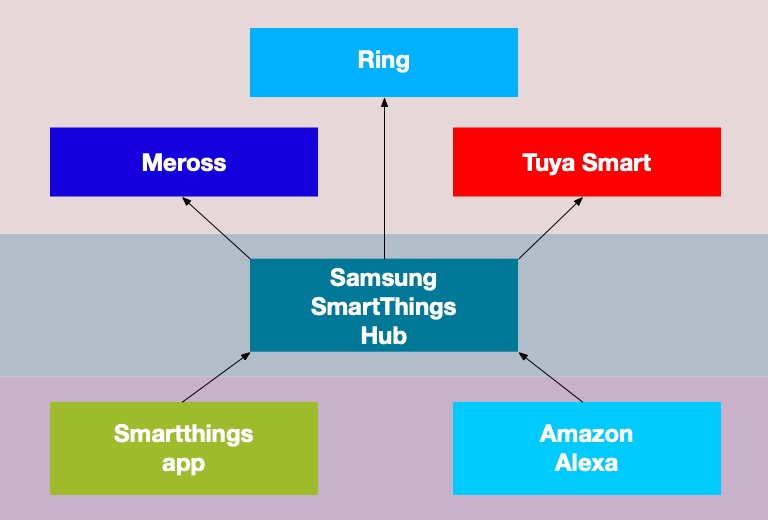 The system works by having no communication between Amazon Alexa and the Meross or Tuya Smart devices - there is another layer of abstraction added, the SmartThings Hub. This is the control centre. This is also how my IFTTT commands are processed - by communicating directly with my webserver which then talks to the hub that then deals with the rest.

It's great when I'm out and about that I am able to control my devices in this manner. It's also very flexible and my SmartThings Hub hasn't really ever been down (I plan on getting a UPS for it and the router at some point).

However. The big problem is that the SmartThings app on the Apple Watch uses the old version of SmartThings and can no longer be used. The result is there is no easy way to communicate with the SmartThings Hub from my Apple Watch. But why is this a problem? Sure I could just use my iPhone. But isn't the idea of a smart home that everything is designed to be simplified. Plus my Watch is an amazing tool for when I'm out and about - for example, I've got Hive on there too (sadly, Hive does not integrate with SmartThings). SmartThings has dictated which hardware products I purchase and which I do not. For instance, Meross was a brand I selected because I read that the quality is excellent and the fact it integrated with SmartThings.

The solution to my problems was to get that wonderful Home app on my Apple Watch that had never been used connected to SmartThings. I had heard of a tool called Homebridge which allows me to very easily set up my devices with the Home app using Homebridge as a HomeKit server.

How I got it to work

I followed the instructions in the GitHub page for Homebridge found here. These instructions show how you how to install Homebridge (I use a Linux machine and a macOS machine which are much easier to set up since most programs like this are designed to run on a stable machine like a Linux or macOS system).

I found a video that helped me to get this set up (the part that got me the most was the installation of the SmartApp into SmartThings as I didn't know which one to install). You can find the video at Tech Tech And More Tech's website here.

I now can control my devices from my Apple Watch: 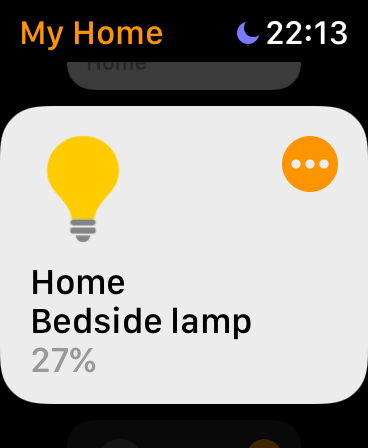 Posted by jamiebalfour04 in Smart Homes
smartthings
samsung
smarthome
Comments
Powered by DASH 2.0 (beta)
Scan and keep for the latest article or review every time!