Cloud computing - clearing up the clouds 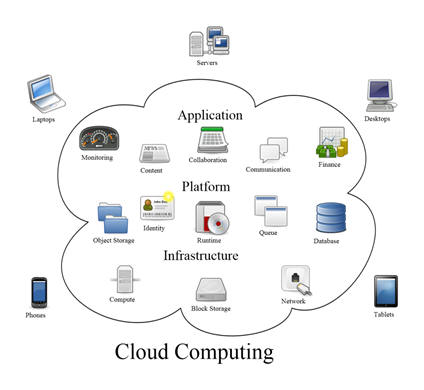 Since the invention of the Internet in the early nineties, we have seen a massive increase in the number of products and services available to users. All of this has become a massive part of what is now known as "cloud computing". Enterprise computing has become a huge dependent on networking and in turn the cloud. This article will discuss what the cloud is, its advantages and disadvantages and how it works.

Cloud computing as it stands is something that has been under development for a long time. Although there is a wireless networking company called 'The Cloud', this is not directly what we are discussing here. "The Cloud" has been a metaphor for the Internet for a while, and when combined with the word computing it becomes something more.

Cloud computing describes the internet (in a crude manner) as a collection of different pages, servers and services and the cloud is a new way of combining these tools and services. Some examples of competing cloud computing providers include Amazon Cloud Drive, Apple iCloud, Google Cloud and Microsoft SkyDrive. All four of these examples provide several different services to the end user such that there appears to be a seamless integration across different devices. A widely used cloud platform development application that is used today is Microsoft Azure.

One major use of cloud computing is storing data on the web. Several cloud setups permit users to store information online and even access it with a phone or a tablet (such as Microsoft SkyDrive and Apple iCloud), which allows them to work on their documents on the move. In addition to that, backups are carried out to prevent data loss so the user's data and information is always kept safe.

However, online storage is not the only use for these cloud applications. The above image shows the depth of integration between different devices and the services of the cloud. Most companies go further and add extra features such as a calendar, contacts, notes, reminders and so on. This allows devices such as smartphones and tablets to access the information stored on the cloud and update their own information against it, a process known as synchronisation.

Apple's iCloud is an example that goes further than storage:

iCloud does more than store your content - it lets you access your music, photos, calendars, contacts, documents, and more, from whatever device you're on

iCloud is designed to synchronise iCloud Mail, Contacts, Calendars, Reminders, Safari, Notes, Passbook, Photo Stream and Documents to all of a user's devices with iCloud. This is just one example of how useful having cloud storage can be.

The benefits of cloud computing

The advantages of cloud computing services are pretty self-explanatory. The first most obvious gain from cloud computing comes from the fact that you can access it on any device that supports it, in most cases all it requires is a simple web browser. This means that if a user travels around between home and work, or even to another country of the world, they can still access these services. If this is a document that is still being worked on the user can move between computers and access the file via the cloud. The centralised storage of the cloud permits users to continue to work wherever they are.

Another benefit is the background synchronization that is involved. While a user may be working on their document, their smartphone or any other cloud device, could be receiving information that is pushed from the server to their device. This push service permits the user to continue to work without being disrupted. One of the most crucial benefits is the fact that, being a centralised storage, allows for easy backup, and in the case of any kind of failure with the company's hardware; a backup would be utilised. As stated by Gillam, in the case of failure, there will be a hot backup instance of the application, which is ready to take over without disruption. This idea means that if for any reason a service has a fault and loses all data on the system, a "hot backup" will come into place.

Issues and disadvantages of the cloud

The first and foremost issue which has to be recognised by any user is that the cloud requires an internet connection. If a user has no way of accessing the internet, the same can be said for their cloud services.

Another issue related to the previous argument is that an internet connection must be in the "high-speed" connection range. A dial-up connection simply has not enough bandwidth to cope with the constraints of the cloud as stated by Business Link (a UK government agency): "To be able to work effectively 'in the cloud' your business needs a fast internet connection." As Schatz states:

"Nineteen million Americans, or 6% of the population, live in areas where high-speed Internet isn't available, according to a report released Tuesday by federal regulators."

This is rather astonishing, and this will hinder collaborative productivity and therefore hinder the use of cloud computing.

As with any service on the internet there are also security concerns. Cloud computing is no exception to this statement. If a user has stored information on a cloud service such as a calendar appointment to say where they are at a particular time of any day, such information could be obtained by a member of the public who has stolen their identity, and then used to identify their location. As of 2012, very few companies are offering an amount of storage larger than Dropbox's 32GB, and therefore it can be established that a hard disk or even smaller solid state disk of a standard desktop computer (300GB+) is much larger than the largest cloud storage.

I am neither for nor against cloud computing. The concept is one which can be considered to be ideal but flawed. The main issue in my personal opinion lies with the privacy concerns. The Internet is a dangerous place and some companies do not offer enough of a security promise. I myself utilise cloud storage, but only for documents that I am working on between multiple locations.

To that end, I would like to summarise what I feel about cloud computing. First of all, it is a concept that has been developed for years, but it just will not get to the point where it holds our digital lives. Second of all, the lack of available solutions offering a large amount of storage is a problem. Finally, I feel the cloud will take over gradually to become one of the primary storage mediums of the future, but it will remain for less security-concerned data.