Macs are great, let's not beat about the bush, the build quality is amazing. However, when they do fail they cost you both an arm and a leg to repair. That is for most people. However, if you're even the slightest bit tech savvy, and of course, I'm a lot more than a slight bit tech savvy, you might want to consider a repair yourself.

In some cases it makes a lot more sense to try and figure out the problem yourself, so when the MacBook Pro 2011 13" I sold my brother began to run sluggishly, I began to think about the possible reasons why it would suddenly break down like this.

First off, of course, I replaced the drive in the system. We took the SSD I put in originally out and test a new one. We tried this with a spare 2.5" HDD we had in the house but to no avail, the system was still running slow.

The next thing I tried was to run S.M.A.R.T tests on the system. Everything seemed nominal and the system did not report any major problems in these tests. So I began thinking it wasn't anything to do with the storage system.

Next up, RAM. Since I have a Mac mini which uses DDR3 and also has 16GB of RAM (and I can't remove the RAM from my MacBook Pro) we thought it would be a good idea to try it out in my brother's MacBook Pro and see if it made any difference. Alas, it did not change a thing.

We were lost for ideas as to what was wrong and I only had one or two soft ideas to put forward. The first of these was to reset the SMC (System Management Controller) by pressing the appropriate buttons on the keyboard. Again, nothing happened. The next step was to do a soft reinstall (by soft I mean getting OS X to attempt to fix itself by reinstalling key components of the operating system) and then a full reinstall (format the drive, erasing all files and then reinstall OS X). Nothing worked.

The fix came quite a bit later after our last attempts because my brother was so determined nothing would work and wouldn't let me near the computer. When I did get the chance to do something about it, I came up with an idea after remembering there is a removeable ribbon cable between the mainboard and the SATA connectors (pictured). 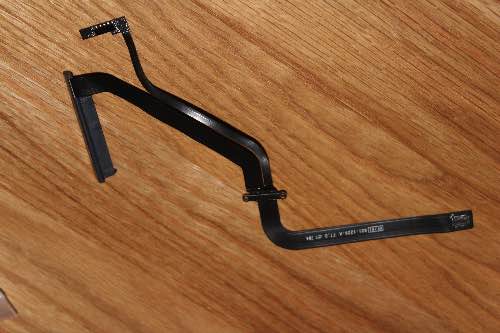 I started to wonder if replacing that might make a difference. I immediately went on to eBay and with my brother's permission bought one. It cost around £10 to buy this cable. I have linked to one here.

The cable was lying around for sometime before we finally decided to replace it. Would you believe it but it actually worked! The MacBook Pro which is now over five years old has been given a new lease of life and works perfectly again!

I partially believe this failed because of Apple themselves since back at the end of 2015 my brother had to pay just over one hundred pounds to get Apple to replace the battery and touchpad in the MacBook after it began to swell after months of underuse (it does genuinely happen, and I did keep telling him to use it or it will happen). I believe that to some extent it wasn't properly carried out because it immediately happened after they had worked on it.

Posted by jamiebalfour04 in Technology
macbook
pro
2011
13
13
Comments
Powered by DASH 2.0 (beta)
Scan and keep for the latest article or review every time!